How to overcome frustration with emotional acceptance 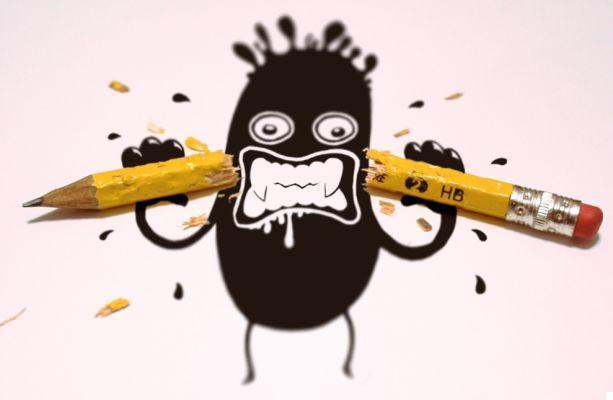 I dare to say that there is no person who has not met there frustration. It's hard not to get frustrated when things don't go as planned or when a lot of effort doesn't pay off. In some cases, frustration becomes an unwanted travel companion that leaves us with emotions on the surface and takes away our desire.

When we have the feeling of repeatedly hitting a wall we risk ending up emotionally exhausted. In fact, feeding her or moving from frustration to frustration is like an emotional time bomb that can explode at any moment. Prolonged frustration generates invisible emotional residues that build up and fill us with negative energy. This is why learning to develop a good frustration tolerance is vital.

Frustration is experienced as a state of malaise, often accompanied by a sense of helplessness or failure. It appears when we fail to realize our projects, dreams, goals, desires ... or simply when we fail to complete an activity.

Indeed, frustration is a common reaction in children because, due to poor development of their skills, they often encounter obstacles that prevent them from successfully completing the task ahead. When they can't do something and realize the limitation, frustration ensues.

From this perspective, frustration is a negative feeling caused by the desire to do or accomplish something and the inability to accomplish it. Therefore it is a natural reaction, although that does not mean that it is beneficial or healthy.

The types of frustration and our reactions

There are two types of frustration:

- Internal frustration, which derives from the challenges we set ourselves, from the inability to reach our goals, from failed dreams and unmet needs.


- External frustration, which arises from circumstances beyond our control and prevent us from achieving our goals or meeting our needs. These are usually difficult environmental obstacles to overcome.

Frustration can trigger different responses, which vary according to the importance of frustrated expectations, our psychological resources to cope with the situation, and the level of cognitive dissonance we experience. The most common reactions are:

- Isolate yourself. Many people, when they feel frustrated, prefer to isolate themselves from the situation or the people who are disappointing them, by raising a wall. It is an evasive reaction, to avoid negative feelings. It is also common for apathy and disinterest to appear.

- Obsess. Frustration can also generate the opposite reaction; that is, the person may become obsessed with what happened, trying to find scapegoats or guilty ones, not being able to move on, being trapped in the vicious circle.

- Aggression. Frustration is often expressed through aggressive or threatening behaviors, which are a manifestation of the feeling of helplessness.

- Regression. It consists of behaving in an immature and childlike way because you don't have the right tools to deal with disappointments. Often this frustration reaction leads to denial of what happened.

The consequences of frustration

It is perfectly understandable that we feel frustrated if after spending a full year studying we have not been able to pass the exam. It is also understandable that we feel frustrated if we have lost something very precious. But the sooner we can resolve this discrepancy between reality and expectations, the better off, because sinking into frustration is very damaging.

In reality, the problem is not emotion, but what we do with it. If we don't learn to live with frustration, it will take over our life and turn it into a real hell of despair, bitterness, resentment and resentment.

Frustration not only destabilizes us emotionally, but also generates a lot of doubts. First we will start asking ourselves: "Will I make it next time?", Then we will move on to a dubious statement: "maybe I will fail again" to end with a sensational statement that kills our dreams and plunges us into total stillness: “I won't make it, I'm a failure”.

Indeed, this is precisely the biggest problem with frustration: it causes loss of motivation and promotes a negative, low-value self-image, turning into a self-fulfilling prophecy. That is to say, if we think in advance that we will fail in a project, we will have a better chance of failing because we will take a defeatist attitude.

Frustration is a primary or instinctive response, a natural reaction when an obstacle arises or we fail to achieve the goal we set ourselves. We all get frustrated from time to time, but it's a reversible state.

However, there are people who have a low tolerance for frustration, which means they get discouraged at the slightest setback and are unable to restructure their thinking and behavior patterns to change their goals or ways to achieve them. These people have rigid thinking and often have unrealistic expectations, which is why they often feel frustrated.

- They have a hard time managing their emotions, so they take control

- They are impatient, impulsive and so demanding that they develop a self-centered attitude

- They want to get their needs met immediately, so they react badly when they have to wait, usually getting angry

- They have a rigid and dichotomous thinking, they usually think that things are black or white

- They easily demotivated in front of the first obstacle

How to overcome the frustration?

The answer is in radical acceptance. Basically, a frustrated person is someone who has a lot of unfinished business with his past and little knowledge of himself, or knows himself but doesn't accept himself.

The acceptance that allows you to get rid of frustration is a process that takes place on a deep level, it is not an acceptance on a logical and rational level, but on an emotional level. For example, you probably know what will happen if you fail to carry out what you propose, you know the possibilities, but you don't accept them. Because it is one thing to know and another, very different, to accept on an emotional level.

So, instead of asking yourself: What will happen if I don't make it? Ask yourself: Can I live without getting what I'm aiming for? Are there any other ways to make it happen? And, how does not achieving this affect me emotionally? Only then will you begin to accept the apparent defeat by turning it into a victory.

Radical acceptance begins with understanding an old Chinese proverb that says: "a snowflake never falls in the wrong place". This means that there is no point in fighting against what has already happened and often there is no point in trying to find meaning to this. Some things happen, we have to learn to accept them and move on, trying to minimize their impact as much as possible.

On the other hand, it is also essential to learn to accept our limitations. There is no doubt that it is important to try to reach a goal, but there also comes a time when it is necessary to abandon or rethink goals by taking a more realistic perspective.

We can take this sentence from the famous psychologist who has dedicated most of his life to the study of human emotions, William James, transforming it into our mantra: "accepting what has happened is the first step to overcome the consequences of any misfortune".

And we must not forget to create positive spaces for reconstruction that allow us to fill ourselves with dynamic and motivating energy. It's true that sometimes things don't go as planned, but there are also many big and small things for which we feel grateful and normally take them for granted.

Learning to focus on these things, perhaps keeping a gratitude journal, will help us offset negative experiences and recharge our emotional battery with more positive energy that will act as a shield in the face of frustrating moments.

How to develop critical thinking in 3 steps? ❯

add a comment of How to overcome frustration with emotional acceptance