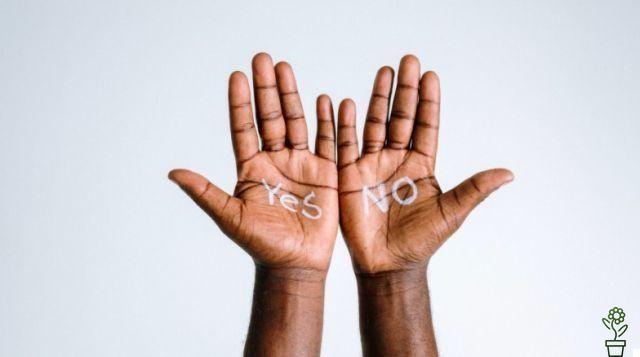 Learn to say no it can improve our productivity, create in others the just respect towards what we do, increase our self-esteem, make our relationships healthier, release a lot of ours time and our energies.

So why is it so difficult for us to do it?

How come, even when we don't want to, we find ourselves saying yes?

But above all, how can we change?

Before seeing all these things one after the other, let me tell you a little anecdote from one of my favorite films….

A truly absurd case of inability to say no

In the psychological thriller "The girl with the dragon tattoo", Mikael, the protagonist, at one point suspects that the man he is talking to is the serial killer he has been hunting for days.

He could leave without problems and notify the police, but just before he leaves the villa, the alleged killer offers him a drink.

Finally, being unsure of his recent discovery and not wanting to appear rude (!), she can't tell him no and accepts the invitation, retracing his steps.

Of course (spoiler) the whiskey is drugged, and so he soon finds himself tied up in a torture room, with the killer looking at him mockingly and saying:

Now, one might think that Mikael's choice was really absurd and stupid. From film, in fact.

Instead, what has always struck me about the scene, and this is the reason why I tell it to you, is its verisimilitude.

The fact is that, partly due to the strength of social conventions and partly due to intrinsic psychological reasons, saying no is really hard, even when the belly and head tell us clearly that we should do it.

But in a world where we are continually bombarded with requests from others - family, partners, friends, customers, colleagues, acquaintances - saying too many yes can be very dangerous.

But it can certainly lead you to suffer situations that you don't like and to be often:

Now, I won't tell you if Mikael is saved from the killer or not: you will have to see the film to find out.

But you can sure do it.

So if you are among those people who, despite their head and heart whispering "no", often find themselves saying yes, the time has come to develop a superpower: to learn to say no.

Why can't we say no?

I want to make one thing clear immediately: I too, have always been among those people who they struggle to say no to the others.


Each of the bad things I am about to say is therefore aimed primarily at myself.

You see, there are several reasons why we can't say no. Reasons that, in some way, we tend to consider noble and good.

Behind this beautiful appearance, however, there are often far less edifying reasons.

For example, as in the case of our Mikael, we are sometimes too attached to social conventions.

Other times the problem is that we have low self-esteem, so we always put the needs of others before our own, as if the latter counted for little.

Still other times, we lack self-confidence, and subconsciously behave as if others think about us it didn't depend on who we are, but on what we do for them.

Well, looking at it from this point of view, not knowing how to say no is not a very good thing, don't you think?

Because we not only overload ourselves with tasks and problems that are not ours ...

Not only do we comply with ideas, situations, attitudes that we do not share ...


But we do it not out of generosity - as we sometimes tell ourselves to justify ourselves - but out of cowardice, a quiet life and a desire to please others.

Thus allowing those around us to appropriate our time, consume our energies, diminish our interests.

To the point of sometimes establishing a vicious circle that leads us, in addition to damage, to insult: others begin to take our "yes" for granted that they no longer even value it, and their expectations and demands turn into demands.

But it's not their fault, it's ours, because we're the ones who allow it.

And therefore, fortunately, it is always us who can remedy the situation.

How to learn to say no

Once you are aware of the problem and the reasons for it, learning to say no is relatively easy.

According to coach Chloe Brotheridge, who has also written a book on the subject, the first thing to do is get a little angry Thinking back to all the times you said yes when you should have said no.

How many lunches and dinners did you have to do with people you didn't want to see?

How many hours have you spent in perfectly useless business meetings?

How much time have you wasted on interests that weren't yours?

How much energy did you put into doing things that others should have done?

Think about it, get a little angry, and you will see that a spark of motivation to change will immediately ignite.

After this first step, to learn how to say no you will then have to review some other aspects of your mindset.

It has to depend on who you are, not on what you do for others, and then saying some nice "NO" will only strengthen it, because it will help you to say loudly "THIS AM I".

Of course, someone might be disappointed…. but this is precisely the point: learning to say no also means no longer act according to the expectations of others.

Another important aspect that you will then have to consider is what you dedicate yourself to: your passions, your work, your goals.

Because if the needs of others always come before yours, the reason may be that you come first you don't consider it important what you do.

On the other hand, it's logical isn't it?

If you were performing an open-heart surgery, writing a masterpiece, studying for an exam that is fundamental to you, or even just - more modestly - arranging the house because you believe it is really important to do it ... here you would not let yourself be distracted by anyone!

When instead you don't have a clear purpose and you don't feel like you are doing something really meaningful, here is the temptation to feel important by supporting the needs of others.

So, in this case, you have to be honest with yourself:

Finally, there is one last aspect to consider in order to learn how to say no.

But this, being a bit particular, must be treated separately.

Learn to say no that help you grow

Learning to say no to someone you really love, for example our child, our partner, a dear friend, is a little more difficult.

First of all, in fact, the reasons we have seen before - desire to please, to feel useful, not to disappoint or hurt - are really strong.

Then, they also join them real altruistic motives, precisely because they are people we love.

And, finally, everything is mixed in very complicated psychological and emotional mechanisms, given by the assiduous attendance and a role play which has been established over the years.

That is, it's one thing to tell the couple you just met on vacation that you don't want to go out with them.

It is quite another thing to tell your best friend that, from that day on, you suddenly no longer have time to keep up with any nonsense, because you have other things to do.

Or to your boyfriend who, from that moment and forever, will have to start clearing the table and ironing his pants by himself because you no longer have time to do it.

There is only one way in this case: to understand and be convinced that it is for the good of all.

In fact, being told no will help them to mature, to take their responsibilities, to develop the right respect for you and others.

It will make them grow, in short, and this will allow the creation of a healthy relationship between you.

On the other hand, anyone who has a child knows: the no that one says to him is even more important than the yes!

The same thing happens, believe me, with adults.

What do you say when you say no

Especially in Latin culture - the Anglo-Saxons in fact have much less problems - we are convinced that the "no" hurts, angers, deludes.

But say NO not only is it our right that others must learn to respect, it is also an intelligent life strategy.

When you say "no" in fact, leave a free space for something else: things that interest you the most, opportunities to come, possibilities that you don't even imagine.

Conversely, when you say yes to something, implicitly you say no to everything else of the things you would have liked or could have done instead of that.

And so you find yourself, maybe:

Should we therefore learn to always say no?

Simply, i must be few, convinced and well thought out.

Because every "yes" always carries with it - at least temporarily - the renunciation of something that could have been and will not be.

And if that waiver involves a piece of your interests, your beliefs, your goals, most of the time a nice NO will be the best solution for everyone.

How to learn law (even if you don't study law) ❯