How to learn a language (even if you are no longer a child!)

This article on how to learn a foreign language comes from a deep inner need of mine: I broke hearing that a language can only be learned well as a child.

And I'll show you that an adult can do a lot better.

For example, as a child I was so shy that soon I was not even speaking my own language, let alone English or whatever.

While as an adult the cataract of languages ​​opened to me, and not only did I learn 3 well one after the other, but I also discovered that, in general, learning a language is not difficult at all.

And in fact everyone, regardless of their cultural and intellectual level, is capable of learning their own.

What's difficult is learning a language quickly. Or at least, it's hard if you don't know how to do it.

In fact, many people write to me things like "I don't have an ear for languages" or "I'm too old to learn a language by now".

And this makes them victims of the so-called "Self-fulfilling prophecies", that is, when you are unable to do something simply because you are convinced that you cannot do it.

If you also believe that you cannot learn a language well as an adult, I think the time has come to dispel this myth language genius children.

Because children are actually the slowest students in the world, and you can do much better and faster than them.

Do not you believe it? Keep reading.

And he begins first grade with a vocabulary of no more than 1000 words, without even being able to write them.

I am convinced that if you studied 10 thousand hours a foreign language you could do much better.

The problem is that no adult has that time available, and therefore cannot afford to learn a language as slowly as children do.

He must learn to learn quickly.

Of course, the myth of children's ability for languages ​​actually has a grain of truth: albeit slowly, it is as if their neurons and synapses are modeled around the mother tongue, and therefore as teenagers they are able to:

In fact, if you ask a native speaker to explain a grammar rule to you, they often look at you with blank, questioning eyes.

Now, the price of the extraordinary skills you have in your native language is the very initial difficulty in learning other languages.

It can be said, with the "bold metaphor Number 1”Of this article (there are 2 others and you have to learn them all), that your mother tongue is your skin, while a foreign language you can also fit it like your favorite dress, but it will never be your skin.


But convince yourself of one thing: you are able to learn a language much faster than a child, reaching fluency even in just 3 months, while it takes him years.

You may never be able to model your brain neurons entirely around it. But patience, in the end you don't need to go that far.

The three things to work on if you have to learn a foreign language.

Established that, as a cognitively developed adult, you are able to learn a language much faster than a child, let's see together what exactly you need to work on.

And we do it with the "bold metaphor Number 2"Of this article. (Want to know why I use metaphors so much? Read this post on the study method)

Compare learning a foreign language to a machine:

When you have to learn a language, you need to work at least a little on all three of these aspects.

Of course, if you had all the time that you have a child, you would do exactly like him: you learn the accent, you model your neurons, and after 6 years and 10 thousand hours of practice you begin to work specifically on grammar and vocabulary, starting with the first. elementary.

Since for better or for worse you are not a child, when you start learning a foreign language you must then ask yourself two fundamental questions, so obvious that no one does:

Moreover, get used to thinking this way every time you decide to learn something: clear goal and method to achieve it.

While what you must never do is start studying "random“, Without objective and without method.

So with regards to “What to learn”, at what level are you interested or need to develop each of the 3 elements of the language?

For example, developing a minimally decent accent is necessary, and all in all easy and short. But having a perfect accent is not necessary!

E also for grammar there is a trade off between time and results:

to make oneself understood in the end, it is enough to speak like Indians in films, with verbs in the infinitive; and even turning the sentences like the master Yoda ("powerful the force in this boy flows") does not prevent you at all from making yourself understood, and you will also be likeable.

But then. how much grammar do you need to study at the beginning?

The choice of vocabulary then it is essential: a compact English dictionary contains 40 entries, but not even an Englishman knows them all.

Which of them are worth studying?

And once you've decided "what"Learn, are you sure you really know"how to learn it"?

You already know that the method they teach at school does not work very well, and in fact you probably speak English little and badly, after having studied it since middle school.

So I tell you, seriously, how to learn a language quickly:

And if of all this you ask me where to start, what is the most critical and important area, well, I have no doubts: the vocabulary.

Why, returning to the analogy above:

a car, even if it is ugly and with an inefficient engine, takes you everywhere if it has enough petrol. While a nice car with a nice engine does not go far if it has little fuel.

Furthermore, vocabulary is the lever that allows you to improve everything the rest. Let's see why.

I don't think you have any difficulty in understanding its meaning; and you are probably also able to guess what words are hidden under the capital letters.

If it was a foreign language, despite not being aware of 5 out of 15 words (33%), you would be able not only to understand the sentence, but also to deduce and learn new words.

The fact is that, as of mine "bold metaphor Number 3"

a language is like a puzzle: if you have already placed some pieces, it is easy to attach more!

If, on the other hand, the table is empty, without even a piece in place, well, then everything is much more difficult.

For this reason, learning foreign languages ​​with traditional teaching methods is so slow: because we start too slowly.

See a typical learning curve below: 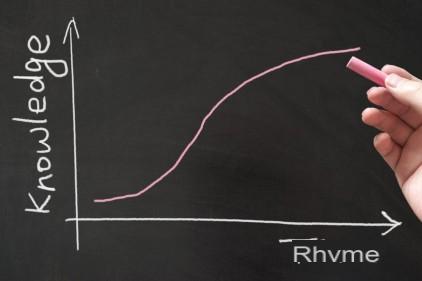 How to learn a language quickly with memory techniques

Up to the third grade I considered myself one of the worst language students in the world. Yet in everything else I was good.

The fact is that I didn't even make an effort, because I was convinced that "I was not good for languages“, Which also my English teacher told me. Just to reinforce the self-fulfilling prophecy a little, instead of questioning it as it should have (Long live our school!)

Anyway, I was one of those who when he said "I know" still pronounced the K, and learning a language didn't give a damn.

In the following years, however, I had a series of eureka moments that opened my eyes to foreign languages, and now not only is my English better than my teacher has ever been, but I also speak Spanish and French very well. With the German under construction.

Among the various "eureka moments", it was crucial learn mnemonics.

Memory techniques in fact they seem to be made for learning languages, because they allow you to travel the entire first part of the curve at super-sonic speed learning. Which is where most people "give up", or even try.

And it is also the one that children take 10 hours to walk.

If you don't know anything about memory techniques, before continuing read the article Mnemotechnics: the art and meaning of remembering, and you will discover that I'm not bullshit.

Back to us, do you know why the first part of the curve when learning a language is so slow? Because you have no vocabulary! It takes you a lifetime to learn new words, and after a few days you have already forgotten them.

While with mnemonics you learn words very quickly and in a very stable way, using two specific techniques, the keyword method and delayed repetition.

Both do the same thing in a different way: they give you the satisfaction, the real pleasure, of going through the first part of the curve quickly.

In the blog you will find a long article on delayed repetition, with some links to free resources available on the net.

As I wrote this other post on the keyword method, complete with a example exercise what we will do together.

Read them and you will see that you are not too old to learn a language quickly; they just didn't teach you how to do it.

But there is so much more. As you already know if you read my blog, I like to develop not simple recipes that give you some results, but complete, linear and effective methods that they give you great results.

So, as the English say, stay tuned, because you can do more than just learn words quickly, and soon mine will be available. complete method for quickly learning a foreign language.

Finally, if you know someone who wants to learn a language quickly, share this article on facebook!

How the breakup of a relationship changes the personality ❯

add a comment of How to learn a language (even if you are no longer a child!)