How to get a boyfriend: 15 infallible ways 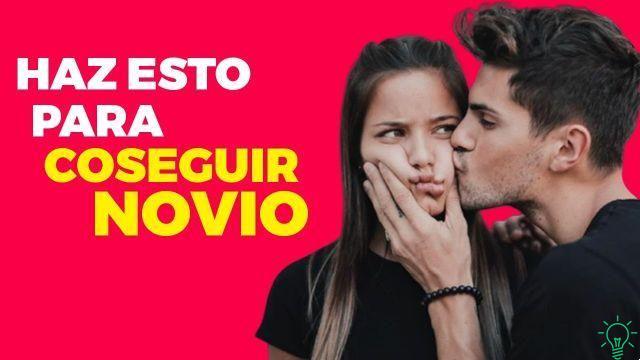 In this article we will discover together how to conquer a boy through 15 techniques that, if practiced correctly and calmly enough, are practically INFALLIBLE.

Let's face it, everyone wants to fall in love at some point, and more importantly, they want someone to fall in love with them. The latter is not always as easy as it sounds, but fortunately there are some strategies you can adopt.

Once you learn a few simple techniques, you will realize how easy it is to make a guy fall for you, and the best part is that these are things most girls are naturally very good at! When it comes to getting guys' attention, subtlety doesn't always work, but you don't need to go overboard either.

How to win a boyfriend?

In fact, it's easier than you think...

If you've ever wondered how to win over a guy, rest assured that it's much easier than you think. These tips don't require you to spend a lot of time with the guy or even get to know him very well. If you're developing feelings for someone and they don't seem to feel the same way about you, don't get discouraged. Familiarize yourself with some of the following tips and do your best. The results will surprise you!

PS: We have already written a guide similar to this in the past, titled:

How to make a guy fall in love with you: 17 infallible tips

1. Always be super nice to him

One of the most common complaints that men have when they are in a relationship is that the girl they are with has a bad attitude towards her or just hardly ever smiles. Just like girls, guys want to be with a girl who smiles, has a positive attitude, is confident, and is fun to be around. So, if you want a guy to fall in love with you, you have to start smiling and have the right frame of mind when you are around him.


2. Don't be too complacent

Generally, guys don't like girls who are bossy or overly eager to develop a relationship. Men tend to keep their male friends even when they are in a relationship, while many women start to ignore their friends when they go out with someone. When you're trying to pick up a guy, make sure he knows you're an independent woman and can easily live without him, even if that's not entirely true!

3. Always give your best

Do you have to lose 10 pounds and dye your hair to get a guy? Of course not, but you should always look your best. Make sure your hair and clothes are neat and clean and that you're wearing a nice dress every time you see him.

Both boys and girls value the physical appearance of their partner as important, even if they have been in the same relationship for some time. Always do your best when you're around that special guy.

4. Always listen to it

Let's face it, people love to talk about themselves, and if you want a guy to love you, you need to listen to what he has to say. Not only does this show him that you really care about him, but it also gives you a chance to learn more about his likes and dislikes. The more you get to know him, the easier it will be to think of other ways to make him care about you, and listening is the first step.

Guys like to be surprised by their girlfriends. So you can organize a fantastic candlelight dinner, dress up and bring her some romantic gifts. These small gestures of love and care will have you winning (and keeping) a guy in no time.

Not only that, but you can also make him happy by leaving him notes written in beautiful messages in random places.

6. Laugh when you're around him

Everyone wants a partner who has the same sense of humor as you, so show her yours every time you're around her. Everyone likes to be around people who make them laugh, but this is especially important when you want to win someone over. Not only should you laugh a lot, but you should also say and do things that make him laugh. Laughter is a great way to win over a guy.

7. Let him know how alike you are

If you really want to know how to pick up a guy, one thing you need to do is remind him how similar you are. If you know he loves rap music and you love it too, make sure he realizes that it's something you have in common.

Similarities are important in any relationship. But don't fake interest in something just because you know they like it, instead find something you both love and bring it to their attention.


8. Tell me what makes you special

Everyone is good at something, and if you have a special talent or area of ​​expertise, let them know what it is. If you are a great cook, invite him to dinner and show him your skills.

If you're good at sports, ask him if he wants to join a game or work out with you at the gym. You can easily let her know her special talent by telling her about it and showing it to her. You'll want to let him know you're a good catch!

9. Be a little different from other girls.

We all have stereotypes of the opposite sex, so don't let them think you're just a "typical" girl who doesn't care about anything except makeup and shoes. Show him that you have a mind of your own and that you have a wide variety of interests. Don't be fake, of course, but think about what makes you different from other girls and highlight it every time you're around him.

10. Show him that he can trust you

Honesty is a must if you want a real relationship with a guy. He needs to know that he can trust you and that you are 100% genuine. This is another reason why not being fake is so important. A guy should think of you as an honest and trustworthy person, otherwise he will never be attracted to you. If you want to get a guy, you have to be 100% honest with him from the beginning of the relationship.

11. Do things for him without receiving anything in return

It's always good to do something to help others, even when you know you won't get anything in return. Little things mean a lot when it comes to helping you in any way, especially if it doesn't benefit you personally. Small gestures of generosity are key and if your goal is to get a guy, you can bet he'll notice!

12. Compliment her whenever you can.

It's no secret that men love to be complimented, and if you give a guy sincere compliments, he'll respond positively.

This is especially true if you praise him for doing something kids are especially good at, like fixing a gadget or changing the oil in a car.

Be sure to let him know how much you appreciate these kinds of talents, and compliment him as often as possible.

As with so many things in life, when you're trying to get a guy, it can take a while. After all, even under the best of circumstances, it won't happen overnight. It can take months or even years, but the secret is to be patient, and if you run out, don't let them know.

Just be consistent and patient, and the magic will most likely happen eventually.

14. Make sure you have smart conversations with him

Sure, men like physically attractive girls, but they also want a woman who is fluent in various topics of conversation and many interests. She tries to talk to him about many different things and shows a bit of your intelligence.

No one cares about just their physical appearance, everyone has a bit of substance within them. Show your future partner that you can have an intelligent conversation with him at any time.

If there's one thing guys hate, it's when girls expect them to change their ways. If the guy you're interested in likes to spend $1.000 on auto parts, don't rule him out for it.

It's obviously something you're deeply passionate about, so let it be. If he drives you too crazy, it's unlikely he's the right guy for you.

16. (EXTRA Tips) Let him know you're thinking of him

There are plenty of ways to let him know you're thinking of him, and they won't go to waste.

In the end, all you have to do to get a guy are the same things that make any relationship work, including friendships.

These include self-confidence, authenticity, honesty, a sense of humor, and showing how special you are.

Winning a guy won't happen overnight, of course, but it will eventually happen if you know what to do and stick with it.

How to become a better person ❯

add a comment of How to get a boyfriend: 15 infallible ways