How do you know when the time has come to change course? 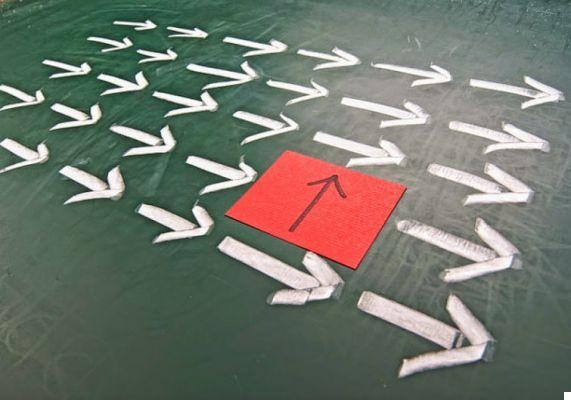 We must always move forward. Never back away, not even to gain momentum. You have to make an effort. Giving up is a failure. If life doesn't stop, neither should you. You must always aspire to something more. These and other beliefs are part of our culture. We heard them in our childhood, they were repeated to us in our teens, and when we can finally take the reins of our life, they turn into our compass. the key to success is perseverancebut it is also the key to failure. And in most cases, the line between stubbornness and consistency is very thin. When we have been hammered for years by the idea that we must remain steadfast in our purpose and when we are too emotionally involved, it is difficult to determine when it is time to leave, stop and change course. The point is that even a strategic retreat can sometimes be a victory.

Three psychological phenomena that prevent us from abandoning a sinking ship

1. Intermittent reinforcement. Intermittent reinforcement produces a strong dependence. Basically, it is an alternation of positive and negative situations, successes and failures, despair and hope. This situation is very common in relationships, especially when a person behaves violently, but then tries to apologize with a gift or a romantic dinner. In this way, the victim receives intermittent positive reinforcement that prevents him from ending the relationship because, in reality, it is not entirely negative. Thus, that person will remain involved in a relationship that hurts him, or will continue to pursue a goal even though there are no signs of progress.
2. The stranded costs. This is a mistake that economists and entrepreneurs are very familiar with, even though it actually occurs in all aspects of our lives, not just in business. Sunk costs refer to our tendency to continue investing time and effort, just because we don't want to throw overboard the time and effort we have invested so far. Said in this way it may seem a contradiction, it is as if we continue to put grain in a sack that we know has a hole in it, it is the typical case of a couple who wants to save their marriage only because they have been married for twenty years, not because they have common interest or a good reason to move forward together. Once we have invested our resources in a project, once we have established an emotional bond, it is difficult for us to leave because it is like recognizing that we have failed.
3. The fear of uncertainty. If there is one thing that most people find difficult to manage, it is uncertainty. Not knowing what will happen, not being able to foresee the consequences generated by strong anxiety, fear and frustration. Since it is very difficult for us to deal with these feelings, we often prefer "the known evil to the good to know" and think that "better an egg today than a chicken tomorrow". The fear of uncertainty paralyzes us and therefore keeps us tied to projects or relationships that no longer work, that have no prospects for the future and make us unhappy. And abandoning something we know can mean a huge act of trust, a leap into a future unknown to us, along with the emotional consequences that this entails.

Speciation: When change is a matter of life or death

Periods of cultural speciation take place cyclically, a concept that comes from biology and means that a change is taking place in the species. In practice, there is a mother species from which a new species is born. However, this does not only occur between plants and animals, but also at the cultural level, but in this case the period of change is usually much shorter, it does not take centuries. In the process of cultural speciation, there are a certain number of people who move away from the mother species in search of something new. What is meant by mother species? Nothing but our circle of acquaintances, the news media, the state and, in general, the whole pre-established system in which we were born and raised.However, at some point in our journey, the world can become a space. too tight, it squeezes us in the same way shoes did when we were growing up. At that moment we understood that the solution was to change shoes, we knew that we could not reduce our feet and, taking analgesics to relieve pain was useless because it would only be a temporary solution. We simply changed our shoes, however, when it comes to our life, we often opt for the most disparate solutions, because the simplest way scares us. Moving away from the mother species implies embarking on a new path on which we do not know what we will encounter. This is why many people decide to stick to traditions, follow old habits and stay in their comfort zone, where they believe they are "safe." There are others who, even not knowing what they will find, understand that following the path of the mother species will not satisfy them but will make them consume more and more energy and, finally, they will end up exhausted and frustrated. So, they decide to change course, abandoning what they had built, getting rid of certainties by buying a ticket into the unknown.

The unmistakable signs that it is time to change

- Dissatisfaction. If what you are doing no longer satisfies you as before, if you no longer feel the same pleasure and the motivation has diminished or almost completely disappeared, perhaps it is time to rethink your goals. It's normal to need new stimuli, so there's nothing wrong with changing your goals.
- Exhaustion. Striving is positive and reaping the rewards after working hard is very comforting, but everything in life should be weighed in perspective. Is it really worth the effort? If the answer is no, perhaps you should look elsewhere. Don't try to follow the easy path, but the path that really motivates you and brings you more emotional satisfaction.
- Loss of meaning. If one day you wake up, look around and wonder what you are doing there, it is because that dream is no longer yours, it has lost its meaning. It's perfectly understandable, because as time goes by, we change. What is incomprehensible is that you continue to pursue a goal that has no meaning for you.
- Negative emotions. From time to time it is advisable to take stock of the emotions that are experienced. If at some point in your life your work or relationship begins to generate more negative emotions than positive, if it creates more problems for you than it solves, it is because the time has come for change. hurry to make a decision. Take a step back, trying to adopt an objective position and evaluate where you are, how far you still have to go and, above all, if it is worth continuing on this path. Perhaps you will find that it is better to change course.
How to bet with good odds of winning ❯

add a comment of How do you know when the time has come to change course?