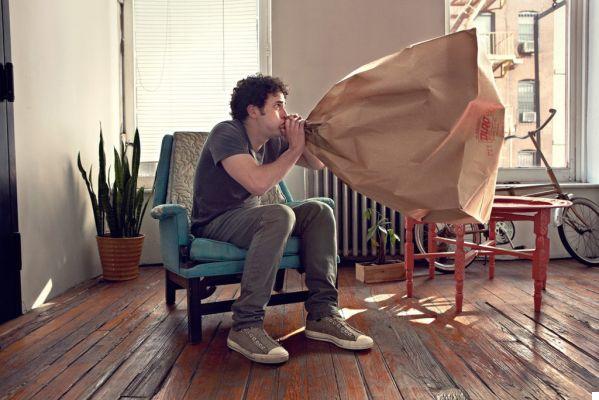 Anxiety sufferers, especially when experiencing a panic attack, are well aware that the world instantly shrinks to itself. During a panic attack the emotional brain takes over, turns off the rational brain and cares only for its survival. Thus, a person who suffers a panic attack while flying does not worry that the aircraft has to divert its path and that this affects the planes of hundreds of passengers. At that moment, the person thinks only that he would like to be on dry land. A recent study reveals the connection between anxiety and this form of self-centeredness.

Anxiety makes us more self-centered than anger or pride

In a series of six studies, involving over 1.300 people in total, researchers from Harvard and Columbia universities generated anxiety, anger, disgust, surprise and pride in the participants by asking them to write about past experiences in which they had lived. moods. Other people did nothing or wrote about how they used to spend their afternoons, in order to generate a feeling as emotionally neutral as possible. Later the participants dealt with different situations. In one experiment, they had to specify whether they wanted to put a book on their right, which meant it would be on another person's left. In another, they had to indicate the location of the green light, from their perspective and that of another person. it had been suggested that he was being sarcastic. In another experiment, they had to read different situations and fill in the blanks as quickly as possible. One situation was: “Anna put the lasagna on a blue plate. After Anna left, Ian went home and ate lasagna. Then he filled the blue plate with spaghetti and put it in the fridge. Anna believes the blue plate contains (lasagna / spaghetti). ”In all of these experiments, people who experienced anxiety or surprise were the most likely to provide self-centered responses, or slowest to take another's place. In fact, they showed more selfish responses than people in whom the feeling of anger, disgust or pride was generated, and the researchers found that the higher the level of anxiety, the more difficult it was for these people to take the other's perspective.

Why does anxiety reduce our ability to be empathic?

A clue comes from the final experiments. In this case, it was found that people became more self-centered when they experienced a greater degree of uncertainty. Indeed, while indignation or pride generated a strong sense of security, anxiety and surprise undermine our confidence as we don't know what will happen in the immediate future. Obviously, when our foundations falter and we feel insecure, we tend to look to the past in search of certainties, we close ourselves in our feelings and in our perspective to find something to hold on to. So it is not surprising that in times of crisis, when uncertainty is extreme, the positions of individuals become radicalized, despite empathy. Without a doubt, this is a very interesting phenomenon, especially since we live in a society that constantly adds stress in our life, a stress that can be converted to anxiety by making us lose the ability to connect with others so we close ourselves in our self-centered view of the world. Now more than ever, we need to strengthen our empathy. And it's not very difficult, we are better able to do this by practicing active listening, rather than continually dumping our problems on others.We can also try to put ourselves in others' shoes instead of going directly into a critical attitude. When we meet with the different, rather than turning away from him and pretending that he does not exist, we must try to understand, even if we do not share. Tolerance is an important value in an increasingly globalized world.
How anxiety stifles intuition ❯

10 phrases about anxiety to know and overcome it

Overcoming a panic attack by learning to breathe