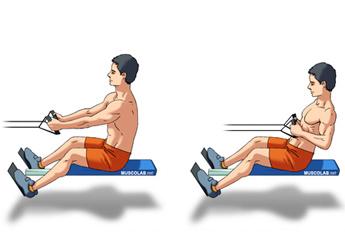 The starting position sees the athlete sitting with the hips flexed, the knees semi-flexed and the feet positioned on the appropriate supports. The shoulder blades are abducted and the hands grasp the handle with a supine grip. The back can be in both flexion (variant 1) and in its position of strength (variant 2); in the latter case there is no action 7 and the muscles involved in it become stabilizers of the spine. In variant 1 (action 6 is also performed) the hips are totally flexed and the execution consists of simultaneously extending the vertebral column and also to reach the starting position of variant 2. At this point the movement continues in exactly the same way in both options. Variant 2 (those who start from this variant, i.e. those who find themselves at this point without having first performed the movements of variant 1, do not perform action 6 and the muscles involved in it are considered as hip stabilizers): starting sees the athlete with his back in his position of strength, the hips almost completely flexed, the shoulder blades abducted, the shoulders partially flexed both in the sagittal plane and in the transverse plane and the elbows extended. The execution consists in extending the shoulders both in the sagittal plane and in the longitudinal plane and at the same time flexing the elbows, adducting and partially elevating the shoulder blades. The action ends when the handle comes into contact with the torso without this gesture being completed with an internal rotation of the shoulders. The inclination of the torso is not changed for the entire duration of the exercise. It is possible to use the cheating technique with small distensions of the lower limbs. Raising the pulley bringing it progressively closer to the pure horizontal plane on which the shoulders lie, the actions of scapular elevation and sagittal extension of the shoulders are reduced and those of scapular adduction and transverse shoulder extension progressively increase. At the elbow, the prone grip favors the brachioradialis and brachialis.


Action
Scapular elevation (only with pulley below shoulder height)

add a comment of Horizontal pulley pulley with prone grip