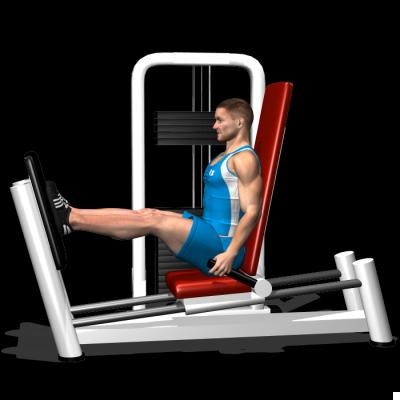 The starting position sees the athlete crouched in the machine, with the knees bent and the feet on the special platform, so that: the back is in its position of strength in contact with the backrest and the back of the buttocks is in contact with the backrest. The feet (step) are placed at a distance equal to or greater than that between the shoulders and the degree of opening varies according to the step, between 10 ° (shoulder width step) and 45 ° (step much wider than the shoulders), but with room for modification based on individual characteristics. Bringing the feet closer to the upper edge of the platform reduces the degree of elongation of the quadriceps and increases that of the semimembranous, semitendinosus and long head of the hamstring, favoring the involvement of this muscle group in the extension of the hip in the concentric phase. Conversely, it happens when the feet are brought closer to the lower edge of the platform. In any case, it is always inadvisable to lower the feet to such an extent as to be with the knees beyond the toes at the end or during the eccentric phase. The execution consists in pushing the seat back, so as to be able to remove the safety catches through the special handles; at this point the eccentric phase of the movement begins with a simultaneous flexion of the hips, knees and ankles (dorsal flexion) until the position of the rest of the body can be maintained unchanged. The concentric phase sees the athlete perform a hip and knee extension at the same time together with a plantar flexion (without however detaching the heels from the support). The execution ends a few moments before the knees are fully extended. In each part of the execution the knees must remain aligned with the feet.