Hops and beer, an inseparable bond 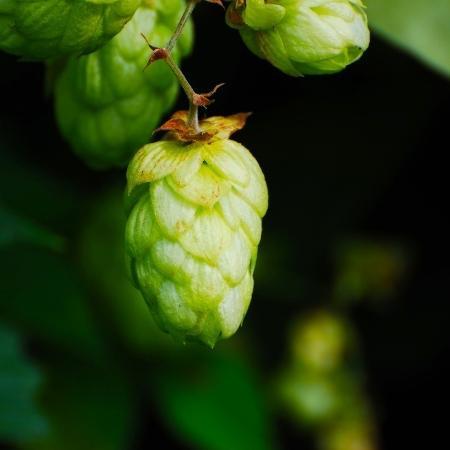 The hop plant has been known since ancient times as a herbal remedy used for its digestive properties, soothing, relaxing and sedative.

Hops is one perennial plant with slender climbing stems that grows up to 7 meters in height. Its scientific name is Humulus lupulus and it belongs to the Cannabaceae family of the Urticali order. In fact, to the touch it is rough in the apical part while at the bottom it is more resinous.

Its leaves are opposite, petiolate with 3 or 5 serrated margin lobes and heart-shaped.

One of the peculiarities of hops is to be one dioecious plant which means that there are female plants and male plants. The female ones bear cone-shaped pistillate flowers grouped at the leaf axils while the specimens bearing flowers gathered in pendulous panicles are present in the male hops.

Hops bloom in summer and of this plant there are many varieties including some that grow spontaneously throughout the country with greater presence in the north.

The hops are grown up at a height of 1200 meters and loves a humid climate, a warm environment, a fertile soil and does not appreciate too much wind.


The cultivation of hops for the preparation of beer it began in the town in 1847 when the agronomist Pasqui di Forlì introduced it for his brewery factory.

The female inflorescences of hops contain resinous glands that secrete a bitter-tasting, yellow-colored substance. This vegetable secretion It is rich in acids, polyphenols and essential oils.

In particular the acids are defined A-acids and the single substances are humulone, lupulin and lupolone they are responsible for the bitter taste. When heat is given to these acids they undergo a modification and isomerize into isoAacids thus becoming very soluble and increasing their power to bitter.

instead the aromatic part is given by polyphenols such as xanthumol and phlobaphenes but above all by the essential oils contained in the hop flower.

Hops are therefore used precisely for these substances which have a strong flavoring power and for their marked bitter taste. Each hop variety has a different blend of aromas and bitterness.

In particular in the production of beer it is this mix of aromatic and bitter flavors, combined with the sweet taste of barley malt that makes every single recipe of this special one. alcoholic beverage.

Every craft or industrial brewery has a secret blend of aromas and bitterness derived from hop flowers. There are dozens and dozens of hop varieties grown for beer production and selected specifically for this function, not to forget the spontaneous varieties.

Hops and beer, the story

Hops are introduced in the brewing of beer starting from the year 1000 AD but only in the sixteenth century will it become a stable ingredient of all brewing recipes.

The spread of the use of hops flowers to produce beer occurred in particular thanks to the German Purity Law enacted in 1516.

La production of beer begins with grinding of barley malt grains and other cereals and with theirs maceration in hot water which allows the activation of the enzymes of the malt. This second stage is called the mashing.

Next the product comes filtered and boiled. This is where the hops stage comes into play hopping: in fact, during the boiling phase the hop inflorescences are put into the drink.

The process of obtaining the must ends with a cooling it's a oxygenation. From here the beer wort is ready for the addition of yeast and for the fermentation and maturation phase.

When the brewing process reaches the boiling stage we have described that hops are added. Hop acids isomerize and dissolve in the alcoholic part increasing the bitter taste of the beer.

Instead the aromas like essential oils are very volatile when heat is given so that they do not disperse, they are added at the end of boiling, about 30 minutes, and with the lid tightly closed.


What is hops in beer for?

Hops in beer production has three important functions: it has the ability to flavor and give bitter taste, it helps to stabilize the beer adjusting the effect of the foam and finally it is a natural preservative.

Hops have antibacterial properties which help to increase the shelf life of the beer. Therefore it is very suitable when beer recipes have a strong fermentation that would compromise their maintenance and also their flavor.

Hops have another ability which consists of being able to keep the beer clearer. In fact, the proteins suspended in the beer are coagulated by the hops which in doing so activates the clarification process of the drink.

Hops can be purchased in different forms. Usually it comes in cones which are the dried female inflorescences, in plugs which consist of the same dried but pressed and finally flowers i pellets which are pulverized hop tablets with an even more compact consistency.

Finally there are also isomerized extracts with or without aroma which can give the bitter taste but without changing the taste. For the latter, essential oils and polyphenols are extracted which, as we have seen, have the aromatizing properties.

One of these hop products it will then be added during the brewing process. A minimum contact time will be required for isomerization to occur and increase the degree of bitterness.

At this point the must will finish the hopping phase with the filtration of the hops itself. The wort will then continue the cooling process, oxygenation, fermentation and maturation.

Craft beers, what are the differences >>

Audio Video Hops and beer, an inseparable bond
How Much Sugar Do You Eat? ❯

add a comment of Hops and beer, an inseparable bond