Hope: 6 ways to rekindle it (even in the darkest times)

Rediscover in this article the profound value of hope and learn to bring it back into your life even in the darkest times. 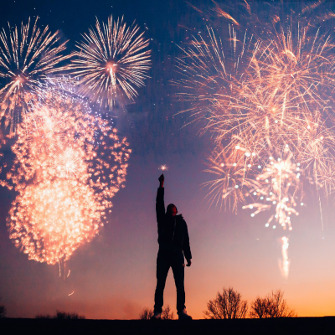 I know what you are thinking:

“Come on, Andre! This is certainly not the year to talk about hope! "

Yeah, with one pandemic in progress of which we still struggle to see an end, the distances,  limitations, the economy in difficulty and the small or large personal problems that affect us all, the word hope it almost seems out of place.

But maybe that's why we should talk about it ...

"And for ever the heart trembles,

between human regret and hope,

this sweet memory of the future. "

In ancient societies the hope was worshiped as a goddess (in the cult of Spes romana, eg).

The same legend of the Pandora's box tells of when the woman uncovered the vase that she shouldn't have opened in any way, letting out all the evils that spread throughout the world. Yet the gods, pitying, left the people right there hope.

As emozione it was recognized relatively late (early psychologists did not place it alongside "strong" emotions such as fear, anger, joy, because its effects on human physiology seemed more intangible).

And it has often been mistreated as a useless or even harmful feeling that would lead us astray, clouding us and separating us from reality.

In reality, hope is a very precious emotion, able to radically change our life.

Personally I would call it one fuse.

From a distance it looks like a humble cord without importance, but if you are able to light it, that fuse will give life to explosive charges of all kinds, unleashing an immense energy.

The fireworks are of course yours passions, yours dreams, yours projects.

Without the fuse of hope, however great these desires of yours may be, they risk remaining cold and inert.

But not all fuses are the same, many fail. The same happens to hope when it is not… authentic.

Over time they have spread different misunderstandings, which helped to transform hope into the refuge of the inconclusive.

The philosopher Giuseppe Goisis, with one of the definitions that I find most beautiful, speaks of it like this:


“Hope is the burning passion for the possible”.

But is it really that important to have hope?

Because hope is important

The affection of hope expands, it enlarges men instead of restricting them, it is never satisfied with knowing what internally makes them strive for a purpose and what can be their ally on the outside. The work of this affection requires men who actively throw themselves into the new that is being formed and to which they themselves belong.

In a way, it is easy to explain the importance of hope.

You can't do anything without it.

Whatever goal or desire you have, if you don't hope to be able to achieve it, you will never start chasing it.

Hope is there essential condition to realize everything.

If we are going to do an activity and we don't have the right amount of hope, they will come to us lack of energy, Our commitment Sara sluggish and discontinuous and the result will surely be disappointing.

Hope is one of the more powerful coefficients of motivation.

But hope is not only the fuel of our desires, it is also a nutrient for our soul.


Hope as a supplement for health and physical well-being

The speranza conditions us enough to interact with our physiology.

The psychiatrist Karl Menninger, in the late 50s, he was the first to study effects that hope has on our psycho-physical well-being.

Furthermore, several studies have shown that hope contributes positively to healing processes of our organs, as if this emotion, igniting itself, could burn what hurts us.

Very suggestive in this regard is the story of the actor's heart attack Martin sheen.

During the filming of Apocalypse Now, one Friday night when he was alone on the set, he fell ill.
In the morning he had a infarct and fell to the ground. He used the strength he had left to drag himself along and seek help.

When the men of the crew finally joined him, Martin saw their faces shocked by thedistress and thought that he wouldn't have made it.

Even when he got to the ER, the expressions of nurses e doctors they kept giving him the impression that the situation was very serious, and he began to lose more and more strength.

Until he saw his wife Janet.

As soon as he opened his eyes, she smiled at him and told him it was just a movie.

That smile, that trust and that serenity gave Martin Sheen the conviction that the situation was not irrecoverable and that he could have done it.

From that moment on, he began to improve, and eventually he was saved.

Was it the hope that his wife gave him that saved him? We don't know, but it sure is what Sheen is convinced of.

So what to do when hope for a better life fails?

And when do we feel hopeless?

Here at the border the leaves are falling,

and although the neighbors are all barbarians and

you, you are a thousand miles away,

there are always two cups on the table.

It happens that life leads us to face moments of difficulty, more or less, great they do waver our hopes.

In these situations we feel extinguished, dishes, as puppets without support.

Our "fireworks" (passions, desires and projects) stand in a corner: cold and inert.

It is precisely in these moments that it is essential keep the fuse of hope alive.

Here 6 ideas to be put into practice in the most difficult periods (any reference to 2020 is purely coincidental).

6 secrets to rekindle the fire of hope

Forbes e Business Insider they put him on their lists of under 30 most influential in the world.

In his book: "The third door. Journey to discover the art of making it", He tells of how the secret of his success, and of many influential people, is comparable toentering a crowded nightclub.

There are three doors.

The first is the canonical one, where one is created endless row of people waiting to enter, and perhaps will never enter.

The second is theVIP access, from which it is impossible to pass if you are not privileged.

The third door is the one that you create yourself, with your inventiveness: you can find a window through which you can enter, you can enter from the kitchens, you can pretend to be a guy who works there and so on.

If things in one area have not worked out or if the scenario, as in this period, has changed, you can't keep trying the same approach.

The third door represents all of those alternative routes that you can use to achieve your goals.

Try something new. Do what you've never done before.

Create one list of strategies, preferably paradoxical, which you could use to get closer to your purpose.

You probably support or have cheered one Heart team, or follow some particular star.

Well, I invite you to do the same for yourself.

Celebrate your victories, reward yourself when you have made progress, rejoice in even the smallest progress.

Don't just give yourself a metaphorical "pat on the shoulder": release your joy and your satisfaction with force.

More intense is the emotion positive that you will try, the more you will consolidate the habit of persevering, of trust and hope.

Those who lose hope easily often have one very strict mentality (also known as fixed mindset): thinks that things do not change, that your skills cannot grow and that the result obtained in a certain area is immutable.

As a result, he lives a kind of negative paralysis.

To get out of it you need to develop a fort Locus of Control internal, or to cultivate the belief that we can dominate events (or at least the way we react to them).

This happens when we take full responsibility for our successes and failures. Where for "responsibility"Does not mean" guilt ", but rather the ability to" respond "to what happens to us (respons-ability).

If we are convinced that we can face any event, hope will naturally blossom in us.

How many times have you happened to receive the call of a friend who was going through a dark period e he was looking for some support?

Maybe you've never thought about it, but this too is a 'occasione, perhaps less immediate than others, to increase our familiarity with hope.

When we are close to a loved one and nurture their loved one confidence in the future, automatically we also increase ours.

Please, the advice here is not to get lost in an emotional black hole frignone on duty.

Here we are talking about sincere support for a person in need.

Perceiving the positive effect that our words and gestures can have on others gives us joy and - in fact - the conviction that the future will hold us some good surprises.

Then, yes generous of attention: in these months you will certainly not miss the opportunities;)

As human beings, we have a deep need for spirituality, to believe in something or someone who is greater than us.

Il inner recollection, expressed in the form of prayer, meditation or a deep state of concentration it is the tool through which we can access this higher dimension.

They will benefit ours optimism, our esteem, our adaptability and of course ours hope in a better future.

6. Don't expect that "everything will be fine"

Cultivate Hope it does not mean believing in an idyllic future, without the slightest problem, a sort of pink wadding to sink into and forget about everything.

This is why the slogan "Everything will be fine“, Which has camped on many balconies in the past months, actually had the opposite effect to that expected.

The gap between that slogan and the reality we have found ourselves facing has been and still is too deep.

In the face of such senselessly optimistic messages, we automatically raise one defensive barrier, which paradoxically leads us to lose faith in the future.

True hope is always rooted in reality and to nurture it we must admit that it will NOT be all right, but aware that if we roll up our sleeves, things will begin to "get better".

Here is "It will get better if I try to change things“Maybe it works less as a slogan, but that's what we really need.

How to start turning things around for 2022

I really hope this article has inspired you to rekindle the fuse of hope.

Amidst limitations, uncertainties and fears, 2021 was a difficult year for many.

However, things are about to change and in 2022 we will return to a gradual normality, a normality that will however be affected by the deep social and economic scars of this pandemic year.

If we want to achieve our goals and thrive in the new year, we must therefore reinvent ourselves; but above all we must put aside once and for all postponements, inconstancy and lack of self-confidence.

Physical and mental fatigue? Find your energy back ❯

The power of inspiration, the muscle that can improve our life

add a comment of Hope: 6 ways to rekindle it (even in the darkest times)