Honeydew: Nutritional Properties, Role in Diet and How to Use It in the Kitchen

Honeydew - in English: "honeydew" - is a sticky, sugar-rich fluid secreted by small insects that feed on plant sap. Among the creatures capable of producing honeydew, aphids and scale insects stand out above all. 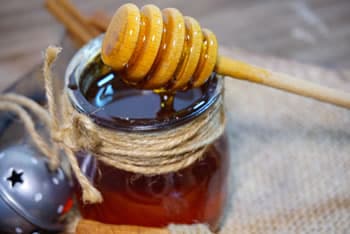 The production of honeydew takes place through the "digestion" of the plant's fluids and the consequent expulsion of waste. These insects parasitize plants by sucking their sap, process it by absorbing the necessary, and eliminate the honeydew from the anus.

The honeydew is collected from various animal species; among the many, honey bees are of great importance for humans, which - especially with a scarcity of nectar in the environment - are able to transform this substance into dark honey with a very intense flavor. Honeydew honey, to which a hypothetical medicinal value is attributed, is particularly appreciated in various parts of Europe and Asia. In the opinion of many, honeydew honey is rich in nutrients and boasts an antiseptic, antibacterial, anti-inflammatory and energizing power. It is not particularly widespread in your country, where traditionally nectar honey is consumed, and in particular chestnut honey, wildflower honey and acacia honey.

In the past, honeydew has also played an important role in the survival of the human species in various parts of the world with arid and desert climates, for example in Africa, Australia, the Middle East, Mesopotamia and Egypt. Today, however, honeydew is mainly consumed in the form of honeydew honey - mainly produced in coniferous forests.


In the kitchen it finds applications similar to those of traditional honey, therefore it is basically used as a sweetener and condiment; for others - but without any evidence to support the hypothesis - it is an excellent food supplement - also associated with propolis.

Honeydew honey is a very caloric product. It has fewer calories than other types of honey, but still approaches 300 kcal per 100 g, of which most is provided by simple / soluble sugars such as glucose, fructose and sucrose. Proteins and lipids appear to be contained in marginal quantities.

Honeydew honey does not provide cholesterol, fiber, lactose, gluten and histamine; purines and phenylalanine are irrelevant. It may contain potentially allergenic molecules, which is why individuals with adverse reactions to various plant components such as pollen should be carefully informed.

Honeydew honey provides various minerals, including above all calcium, magnesium, sodium and potassium; the quantities are objectively moderate. Among the vitamins, retinol and some carotenoids (vitamin A), vitamin C (ascorbic acid) and a few of the B complex stand out; also in this case, the concentrations are variable and not always significant. You can also find polyphenols and other antioxidants, as well as probiotic bacteria.

Note: due to pasteurization - mandatory for marketing - part of the thermolabile vitamins (for example vitamin C) and all the bacteria it contains (good and bad), are inexorably compromised.

Role of honeydew honey in the diet

Honeydew honey is a food that lends itself, in adequate portions and with a frequency of normal consumption, to the diet of healthy people. Excessive amounts are always contraindicated, as they increase the calories in the diet due to the excess of simple sugars. This can also harm the healthy person, but especially the obese, type 2 diabetic and hypertriglyceridemic. It can also increase the risk of tooth decay.

On the other hand, it is relevant in the nutritional schemes of the celiac, lactose and histamine intolerant, hyperuricemic and phenylketonuric. Specific allergic forms are an exception.

Honeydew honey has no digestive implications.

Many people use honeydew honey as a sweetener to substitute table sugar. For the same portion, the average honey contains over 30% less carbohydrates and calories. However, it is necessary to point out a lower sweetening power; for this reason, it is sometimes necessary to use larger quantities to obtain the same sweetening effect. Ultimately, replacing table sugar with honey brings a caloric advantage only if you keep the same portion; using more than necessary would negate the nutritional benefit mentioned above.

Culinary use of honeydew honey

In cooking, honeydew honey has a very similar use to that of other types of honey, even if it possesses rather unique organoleptic and gustatory characteristics.

Honeydew honey has a strong sweetening function, which is widely used in drinks, such as tea, herbal teas, milk and coffee, but also in recipes, such as cakes and doughs of various kinds.

Honeydew honey can be used to replace or alternate with jams, syrups such as maple syrup, condensed milk and spreads, on pancakes and waffles, on bread, on rusks etc.

Some use it as a food supplement, along with two to three drops of propolis every morning.

Honeydew honey has a less sweet taste than that produced by nectar. It is liquid in consistency and does not crystallize. It has a dark and not very translucent color. The aroma is intense, often with relevant notes of resin, while the flavor can vaguely recall caramel.

Aphids are insects belonging to the Aphidoidea biological superfamily; the cochineals instead, are framed in the superfamily Coccoidea - while in the past they belonged to the now obsolete group, Homoptera. The Superfamilies Aphidoidea and Coccoidea belong to the biological order Hemiptera, Suborder Sternorrhyncha and Infraorder Aphidomorpha. Certain caterpillars of butterflies belonging to the Lycaenidae family and some moths also produce honeydew. It can be secreted by some mushrooms, especially ergot - see also: Cornuta.

These insects are able to penetrate the phloem or book - a complex of living tissues with a triple function: transport or conduction, reserve and support - thanks to their mouthparts, sucking the sugary liquid and expelling it from the anus. They could be compared to ticks, fleas, lice and bed bugs for humans and animals.

Honeydew is the basis for trophobiosis, a symbiotic association between organisms that supply and others that receive food. The food supplier is indicated by the English noun of trophobiont - from the Greek "trophē" which means "nourishment" and "biosis" which represents the abbreviation for English "symbiosis".

Some species of birds, wasps, stingless bees - a group of bees from the Meliponini Tribe - and honey bees - which, as we have said, can make honey from the honeydew, feed on honeydew, or at least take it. Recent studies have shown that honeydew honey is produced by over 40 species of wild, native and mostly solitary bees in the state of California. Parachartergus fraternus, a species of eusocial wasp, collects honeydew to feed its growing larvae. Ants can collect, or "milk", the honeydew directly from aphids and other honeydew producers, which benefit from their presence capable of warding off many predators such as ladybugs or parasitoid wasps (Crematogaster peringueyi). Animals and plants in a mutual symbiotic agreement together with the ants are called in "myrmecophilia".

In Madagascar, some species of gecko belonging to the Genus Phelsuma and Lygodactylus have the particular habit of making the honeydew expel from the flatids, teasing them with their snouts, to eat them.

Honeydew can cause plant problems; the typical example is that of sooty molds on many ornamental plants, a real ruin for gardeners. Furthermore, the honeydew, falling from the plants, dirties the vehicles parked under the trees and is difficult to clean from the bodywork.

Audio Video Honeydew: Nutritional Properties, Role in Diet and How to Use It in the Kitchen
Meteorism: Diet Therapy ❯

add a comment of Honeydew: Nutritional Properties, Role in Diet and How to Use It in the Kitchen