Hindu bendings | How are they practiced? Errors And Variants

Le Hindu inflections they are an exercise that allows you to train shoulders, pectorals, triceps and upper trapezius at the same time and effectively.

It is a closed kinetic chain exercise and therefore the recruitment of these muscle groups is more effective and also requires a synergistic work of these.

It is also necessary a job by the abs and thoracic extensors.

How They Are Done

Leaving from a pushup position.

Bring both feet slightly forward, about 30 centimeters, keeping the same position of the hands.

Consequently it is necessary to raise the pelvis in order to form a sort of angle between the legs and the torso.

This position is called of “pike”. From this position come down with the torso and lower the pelvis making a sort of "U" movement.

The triceps must be contracted (therefore the arms are extended) and the thoracic spine must also be extended. The legs remain in place. From this position repeat the movement backwards and bring the torso back and down.

Then push with your arms to return to the pike position.

To return to this position you have to contract the shoulder muscles and contract your abs as you exhale. Returning to the initial position, the shoulders are raised in order to contract the high trapezes and stabilize the position. Repeat the movement for more repetitions. 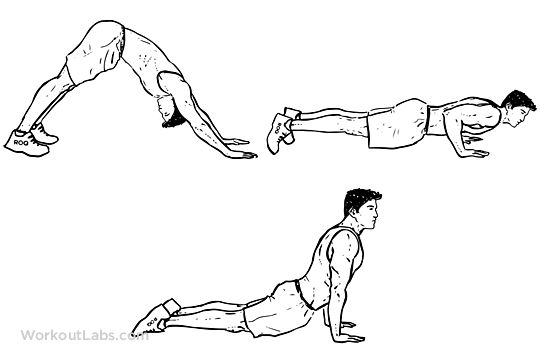 A common mistake is not having an active position of the shoulder blades during the movement. In the initial position the arms are extended and the head is placed between them.

Going down is necessary open the chest retracting and lowering the shoulder blades. you need to focus on maintaining tension in the pecs. Another common mistake is not to push your body into the second phase but just to carry on.

The torso does not have to move by itself but it must be like a ballast which is pushed by the pectorals and triceps.

Finally, it is quite common not to use the push of the shoulders to return to the pike position. For convenience, only the torso is brought back. Also in this case imagine the body as a weight that is carried back and up by the shoulders and triceps.

Arms always go kept close to the line of the hips so as not to put undue stress on the shoulder joint. 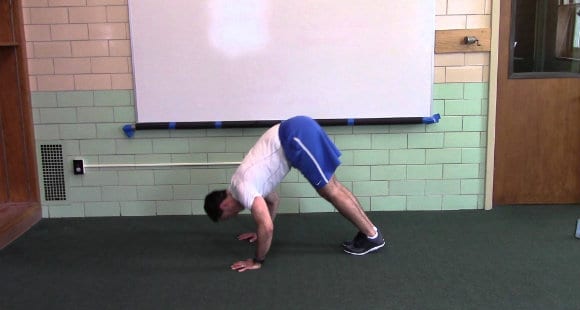 This exercise is quite versatile because if you want to concentrate on the work of the triceps and lower pectorals, that's enough add half a repetition repeating the movement of the second phase.

from position of maximum extension then return with the chest to the floor and then extend again.

If, on the other hand, you want to work more on the shoulders, the trapezes and the high pectorals, just add a half repetition in the initial phase. From the pike position come down bringing the chest towards the ground and then return to the pike again. If the exercise is not difficult enough, you can raise your feet by placing them on something high, such as a chair.

In this way the weight of the body involved in the movement will be greater. This latest variation is a great exercise for train the hand stand or planche movement.

In fact, in the initial and therefore also final phase, the position of the body is more vertical while in the second phase the hands are behind the shoulders and the arms must push the body up and forward.

add a comment of Hindu bendings | How are they practiced? Errors And Variants