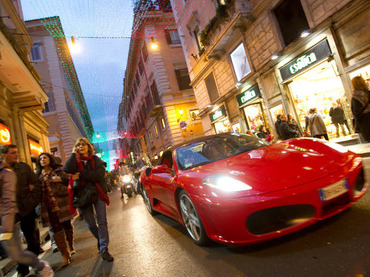 Let's imagine two people: one belongs to the high class and the other to the class
low. Let's say the low-class person works in a factory, lives in one
small house in a working-class neighborhood and receives a relatively low salary.

Obviously, the upper-class person has instead
inherited a considerable fortune, lives in a large house in one area
precious and does not need to work to live. Now let's imagine these two people are driving
their respective cars and when they approach the pedestrian crossing they see
a person on foot who waits to cross and, by law, are required to
stop. In short, which of the two do you think will give way to the pedestrian? We won't have to think about it that long since the same
asks if some researchers from the University of California have asked it.
Indeed, these have stopped near a pedestrian crossing and have
started noting car models and their value in the market
considering which of these were more likely to give way to pedestrians than
they wished to cross the street. The results were clear: about a third of
motorists did not stop to let pedestrians pass and of these, the majority
some were drivers of luxury cars. In what percentage? 45%
of the cars that did not stop were luxury cars. Why does this happen? Researchers think it could be due to
various reasons: 1. High-class people are usually more lonely
and isolated from the rest of society at large, so that they would tend to think
that the normal rules don't apply to them. 2. High-class people have more resources
to minimize the possible consequences of their unethical behavior.
Thus, they would be more likely to violate the rules. 3. Since they are not dependent on the social system,
what others think does not worry them. Thus, social norms do not exercise
the same pressure on them as they have on lower-class people. Of course, these ideas cannot be generalized
to all people, especially given that 30% of low-class conductors
they did not respect the stripes while 55% of the high class conductors respected them.
But even so, the results of this test are still interesting and there
make you think. Of course, many will think that it is the “discovery of water
calda J”.
Affective codependency: when love goes beyond the limits ❯

add a comment from High class and low class, who is more respectful?