Has the Mediterranean Diet Outdated? 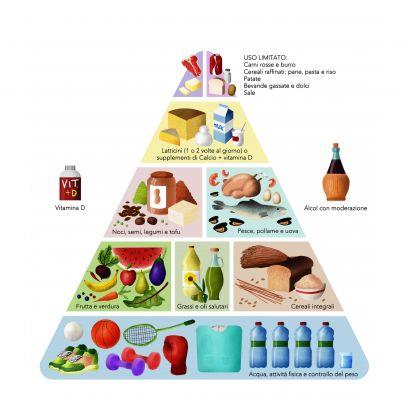 «Introduction to the Mediterranean diet

Failures of the Mediterranean Diet

When Keys completed his studies, the economic conditions of the population of your country were still poor.

People, unable to rely on expensive foods such as meat for their daily sustenance, were forced to resort to poor dishes such as fruit, vegetables and cereals. Given that the availability of food was all in all limited, the overall caloric intake of the diet was also reduced or in any case not excessive.
It is precisely on this simple point, which has been underestimated for years, that most of the failures of the Mediterranean diet are based.
For example, stating that whole grains and extra virgin olive oil are friends of our health does not automatically mean that they can be eaten in large quantities. Those who are not very attentive to their figure and their health could however interpret the advice of those who support the Mediterranean diet in this way.

The food pyramid itself is too simplistic a way of illustrating a diet because it doesn't provide enough information to the reader.

Let's think for a moment of a family that has to deal with unemployment, skyrocketing rents and children's needs; it is unlikely that at the supermarket it will take time and money to select the best quality products.

He will hardly understand what monounsaturated fatty acids, phenols or tocopherol are; hearing about a doctor on television will only understand that olive oil is useful for heart health.
The inevitable result is an excessive consumption of this condiment typical of the Mediterranean diet which, in addition to having many advantages, is extremely energetic (about 100 calories per spoon).

The caloric surplus will inevitably make family members fat and it will be the excessive accumulation of fat that increases the incidence of cardiovascular diseases.

Furthermore, the high cost of the product will lead them to buy cheaper oils, often of poor quality, which have lost many of the virtues for which they are recommended.

If you add to all this large doses of pasta "because pasta is good and red meat causes cancer", obesity is almost inevitable.

The Blunder of Light Foods

Starting in the 70s, the American government, in an attempt to combat the growing spread of obesity, financed a food education campaign based on the principles of Mediterranean diet.

In particular, saturated fats were criminalized, inviting citizens to consume as little as possible.

In a short time, thousands of low-fat products appeared on supermarket shelves. The average consumer, also driven by the similarity between the two words, gradually became convinced that taking fat was synonymous with gaining weight.
As often happens in these cases, the American government was forced to convey a strong message, exaggerated in some respects, but necessary.

The simple advice to reduce fat intake would probably have gone unnoticed and unlikely to have been able to rebalance a diet traditionally too high in lipids. The message also had to be easily understandable (it is useless to explain to those who are not familiar with what eicosanoids or essential fatty acids are).
The same thing happened in your country, home of the much appreciated Mediterranean diet. In an attempt to reduce the consumption of saturated fats, which is excessive even in our country, it was for a long time advised to limit its intake and increase the consumption of typical foods of the Mediterranean basin (pasta, olive oil, fish, vegetables and fruit).
Your country was convinced, and unfortunately many still are, that pasta, bread and complex carbohydrates in general did not make you fat. It is no coincidence that these foods were placed on the lower floor of the food pyramid.


The results of these information campaigns are there for all to see, just look around to see that in recent years the number of overweight people has significantly increased.

Pasta, bread, rice and olive oil are certainly foods of excellent quality, both from a health and organoleptic point of view, but this does not mean that they can be eaten at will every day.


It is essential to become aware of the fact that by eating bread and pasta without paying attention to the portions it is easy to exceed calories and thus open the doors of an overweight that will nullify all the benefits of the Mediterranean diet.


For further information: Does the Mediterranean Diet Make You Fat?

Even the demonization of fats and in particular of saturated ones appears at least excessive.

In fact, the Mediterranean diet recommends consuming a quantity of fat equal to about 25% of total calories every day. It means that in an 800 calorie meal only 25% of these (200 calories) should come from lipids. Since each gram of fat provides 9 calories, the lipid content of our meal should not exceed 22 grams.
Two tablespoons of olive oil (20 grams) and a sprinkling of parmesan (10 grams) are enough, alone, to reach the limit imposed by the Mediterranean diet (without counting the lipid intake of other foods).
Fats have many defects but, in addition to being ESSENTIAL for our body, they increase the sense of satiety and satisfy the palate of the most demanding. For this reason, their excessive limitation not only makes no sense but often even turns out to be counterproductive.
The Mediterranean diet suggests replacing red meat with fish, legumes and, occasionally, with white meat.

This is basically a positive advice, common to many diets, but the fact of limiting the consumption of red meat to one or two occasions a month seems undoubtedly excessive. If it is true that a high consumption of animal proteins seems to increase the risk of incidence of some types of cancer such as colon cancer, it is also true that it is not so much their saturated fat content that kills but the combination of these and a high-calorie diet. , therefore with overweight.
Red meat can therefore be eaten with confidence even two or three times a week paying attention to the cooking methods (see grilling article) and preferring the leaner cuts.

The use of sausages, even lean ones (such as bresaola), should instead be limited to no more than a couple of times a week (see article nitrites and nitrates).

Considering the main meals (lunch and dinner), for example, 4 of them could be based on the consumption of white meats, 2 on red meats, 3 on fish, 4 on legumes and one on cheeses.

Is the Mediterranean diet out of date?

From the United States itself, which for years praised the virtues of the Mediterranean diet, dozens of diets have recently arrived with rules that are diametrically opposed in many ways.
These diets contrast the traditional consumption of pasta and bread with a high recourse to high-protein and hyperlipidic foods (meats, including fatty ones, cheeses and condiments), with very low percentages of cereals and derivatives, however, to be consumed strictly whole.

Thanks to this stratagem, these diets (metabolic, ketogenic, Atkins, etc.) promise to lose weight by ensuring well-being and cowardice for those who follow them.

In fact, the negative effects of such a dietary approach are widely documented.

Their effectiveness essentially derives from the overall caloric limitation, favored by the high protein and lipid intake that overall decreases the sense of hunger and forces the body to spend several calories to metabolize them.


The Mediterranean diet is not outdated but it absolutely needs to adapt to the times and receive a boost of common sense and criticism. Despite everything, this diet remains one of the healthiest and most recommended by doctors and nutritionists all over the world.

To adapt to modern knowledge in the food sector it should however undergo some small changes:

add a comment of Has the Mediterranean Diet Outdated?