Handstand push up | How to do them correctly

The handstand push ups (HSPU) are a medium difficulty exercise in the calisthenics category. This exercise requires good balance in the hand stand position, a good level of strength in the shoulder and arm muscles and a good level of coordination.

For sure we are talking about an excellent exercise both in terms of functionality and aesthetic result. All this is combined with the need for no equipment: all you need is your body.

Performing the Handstand push up

This movement can be compared to the Military Press exercise (slow forward), the difference lies in the reduced ROM of the free body exercise and obviously the fact that the first is a closed kinetic chain while the second an open kinetic chain.

Closed kinetic chain exercises are a superior alternative to open kinetic chain as in the former, the work of the whole body is required to stabilize the movement. The exercises with an open kinetic chain allow greater ease in isolating the muscle groups; this is good if you have been injured but it does not represent the way your body moves. Some problems occur when running HSPUs:

Balance is a very complicated thing. This afferent makes use of different reception channels, the ones on which it is necessary to focus are the sight and the movement of the body. P.

To exploit the visual afferents it is useful to keep the gaze fixed on one point. The point chosen must allow to keep the head and neck in a position aligned with the rest of the body. Having a fixed parameter allows you to maintain a better balance while performing any movement.

The second parameter is the movement of the body: the muscles respond to changes in their center of mass in order to maintain the position in which they are, in this case on the hands. It is quite obvious that since the balance is already precarious in this position, if the body does not move as a single unit, stability is further compromised.

The body must therefore remain rigid and the only mobile segments must be the direct authors of the movement. In order to maintain stiffness throughout the body, it is necessary to actively contract the various antigravity muscles, from the legs to the core: feet pointed, quadriceps contracted, glutes contracted, abdominals contracted. In the hand stand position the force of gravity tends to make the antagonists of these muscles work. For this we see flexed knees, hyper extended pelvises, etc.

These two aspects generally go hand in hand: the shoulders are brought in the same plane as the torso and the elbows with them. This is because we try to perform the HSPUs as a vertical movement. In reality, the direction of the body must be oblique.

The shoulders must be in the scapular plane. To be clear, a good positioning of the shoulders is obtained by positioning the arms halfway between being in line with each other and being parallel to each other.


This position does not faithfully represent the scapular plane but it is a safe position for the shoulders, if you want to position yourself in this plane it is necessary to move the arms slightly more towards the position of parallel to each other. The hands and head, in the position of contact with the ground, must form a sort of triangle with a slightly narrow base.

the hands during this exercise represent the only two points of contact with the ground. They are like the feet during a squat. The hands occupy a much smaller surface than the feet and therefore it is useful to try to maximize the area on which it rests.

This is achieved by opening the fingers and not holding them together. To have greater stability it is essential to imagine that you are grasping the ground with your fingers. Finally, the weight must be distributed between the end of the hand and the beginning of the fingers. In this way it is possible to better exploit the flexion of the fingers and the movement of the wrist to maintain the position. 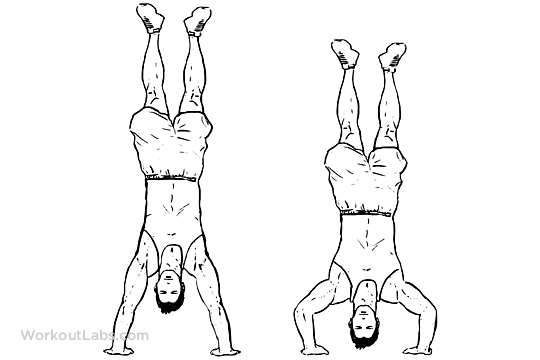 Body alignment in the Handstand push up

The lower part of the body up to the pelvis is held in position by contracting the anti gravity muscles. Often, however, correct alignment cannot be maintained due to insufficient shoulder flexion and reduced thoracic extension.

This is due to hunched shoulders and a shortened anterior kinetic chain, all of which is very common in most people who do not care about these aspects. The accused of all this are always the same factors: sedentary life, reduced attention to the minor muscles of the back to the detriment of the anterior muscles, etc. The solutions are as follows:


It is necessary to distinguish thoracic extension from lumbar extension. The lumbar area is physiologically in extension while the lumbar area is in flexion. To perform a correct HSPU it is necessary to keep the lower back neutral, contracting the abdominals, while the thoracic area must remain extended. Since the thoracic spine is physiologically in flexion, an extension of this segment leads to it becoming straight or even better slightly extended.

The thoracic extension is reduced to a few degrees so if the torso has the appearance of a "C" there is a strong chance that the lumbar area is being used. This puts a compression on the vertebrae of this area which is certainly not beneficial and also hinders a correct transmission of the weight force between the lower part of the body (in this case most of the weight to be moved) with respect to the upper part of the body (which represents the engine of this exercise).

HSPUs are an excellent exercise for working the overhead thrusting movement. The drawback of this exercise is the reduced ROM. This factor can be simply solved by placing your hands on obviously stable raised surfaces (for example steps).

Optimal ROM is reached when the shoulders reach the level of the hands, in this position the arms also reach a greater degree of flexion. This means better work on the part of the delts, the upper part of the pectoralis major, more work on the triceps and biceps. 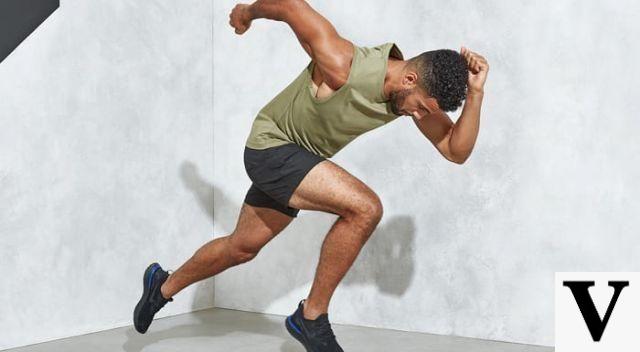 Preparations for the Handstand push up

In general, the limiting factor of this exercise is not the strength of the muscles involved but rather the stability. You can then initially work on a variant, keeping your feet in contact with the wall. This variant can be performed either with the back facing the wall or with the abdomen facing the wall. The variant that most reflects the complete exercise is the second. A "disadvantage" of the back to wall variant is that it is easier to perform the exercise incorrectly.

This aspect must be absolutely avoided because otherwise we end up learning an incorrect motor pattern that leads to both injuries and difficulties in resetting a correct movement.

In this variant there is a tendency to hyper-extend the lumbar area and to bring the shoulders in line with the trunk. This trend can be exploited to further strengthen these components. In fact, the body tends to put itself in the least onerous position and therefore in this variant an increased work is required by the extra rotators of the shoulders and thoracic extensors.

Maintaining a correct execution in this variant means strengthening these muscles more, which are usually the least developed ones. At the same time it is necessary to work on wrist extension and thoracic extension with stretching and mobility. The hand stand position must also be solid. In general, the best exercise for achieving HSPUs is negative HSPUs.

Negative repetitions allow you to work at a high intensity in relation to the specific movement using a movement that is practically the same. This allows you to have an excellent transfer on the complete exercise.

To do the negative repetitions correctly, you need to try to contract the muscle during the entire duration of the movement, you don't just have to go vertical and descend trying to stay balanced. You must have active motion control. To perform the negative reps, you also need to have a good level of strength.

Audio Video Handstand push up | How to do them correctly
High Pull | How is it done? Benefits And Mistakes To Avoid ❯