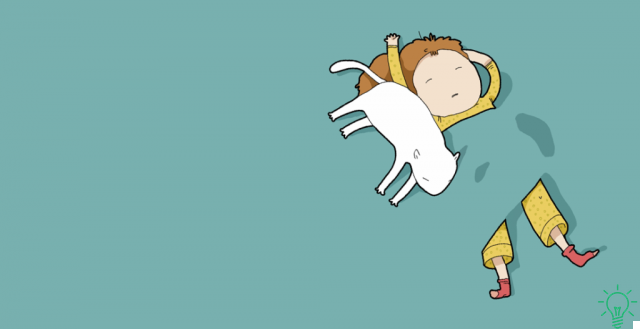 Most people complain when traveling because they don't sleep well. Regardless of whether we have chosen a comfortable hotel room or a relative's quiet home, sleeping well in a bed that isn't ours is difficult for us, at least until we get used to it. In fact, even if we manage to sleep, the next day we wake up with a heavy feeling of drowsiness and fatigue, due to the fact that we have not rested enough. Now researchers at the Georgia Institute of Technology have discovered the cause of this problem. It seems that when we sleep in an unfamiliar bed, away from home, one of our cerebral hemispheres remains alert, does not disconnect completely, remains alert to protect us from the potential dangers we might encounter in an unfamiliar environment.

The researchers recruited 35 young people and monitored their brain activity while they slept in the lab with advanced neuroimaging techniques. These neuroscientists made people hear a beep in their right ear, which normally woke them up. But people didn't notice the same signal when it was sent to the left ear. This indicates that one hemisphere remains on alert while the other is disconnected. These results suggest that during the Deep sleep the left hemisphere was not completely disconnected. In fact, it is not the first time that this type of brain asymmetry has been documented. Some animals, such as dolphins, are known to be able to rest by alternately disconnecting each of the hemispheres of the brain. Thus, while one hemisphere is disconnected, the other takes over and takes care of vigilance. This experiment revealed another interesting fact: this phenomenon was only found during the first night. Once the person gets used to the new bed and environment, they can sleep soundly and both hemispheres are disconnected. This is what is known as the "first night effect".

Why is the left hemisphere not disconnected?

Researchers believe that this is an evolutionary strategy, centuries ago sleeping soundly could represent a serious danger. Therefore, it would be a legacy of our ancestors, a sort of nocturnal sixth sense that is activated when we sleep in an unfamiliar bed, in an environment that is unfamiliar to us. Furthermore, in the experiment it was found that this "night watchman" is really effective because in the presence of unusual auditory cues, the left hemisphere would send out the alarm signal to wake the person up and get him to safety At this point you are likely to wonder why the left hemisphere is responsible for monitoring Neuroscientists believe the explanation lies in the default neural network, which involves certain regions of the brain to keep it working when we are not fully aware, such as when we sleep, are anesthetized or let the mind wander freely. This network is responsible for preparing us to react to dangerous situations. In practice, it is activated to protect us when we detach ourselves from reality or consciously let our guard down.It is also known that the connections of the left hemisphere with the default neural network are stronger than those established by the right hemisphere, which is why it is understandable that this part of the brain remains alert, because it would be more effective to wake us up in case of danger.

How to avoid the first night effect?

Researchers suggest that this effect cannot be completely avoided, but there are some tricks to try to trick the brain into letting it down. For example, you can take your pillow with you and sleep with it or use a fragrance that resembles the smell of your home. These details will give you a feeling of familiarity, so your brain will feel more comfortable and safe. If you travel frequently, one solution is to choose similar rooms whenever possible. This reduces the feeling of newness which alarms the brain and prevents rest.
Is dying for love possible? ❯