Guanabana, some clarity on its properties 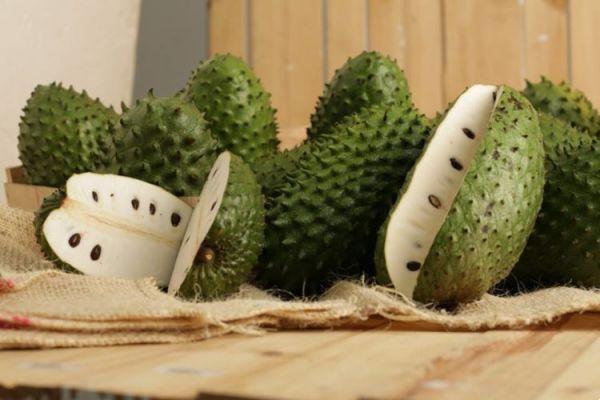 Pronounced with the accent on the second "a", guanábana, it is a tropical fruit which lately is doing a lot of discussion, relative to his alleged anticarcinogenic properties. Let's try to get to know it better and understand what it is about.

It is scientifically known as Annona muricata, a tropical plant that produces a thorny, green and rounded fruit called guanábana, Graviola, Guyabano or Corossole. In English it is also known as soursop or Brazilian paw paw. It seems to be originally from the Antilles and today it is widespread in most of South America, South Asia, North Australia and Florida.

Let's see specifically its characteristics and properties, especially the (alleged) anti-cancer ones.

The tree and fruit of the guanabana

The guanábana tree is quite tall, can reach up to 12 meters, has oblong leaves and flowers, and produces a thorny oval fruit up to 30 centimeters wide. The quills of the fruit are soft, its color is dark green, and the weight can reach two and a half kilos.

Inside the fruit is soft, sweet and juicy, it is eaten ripe, cut in half and eaten with a spoon. It can be used to make smoothies, in fact in countries like Colombia it is blended together with cold milk. Quite perishable and short-lived, it must be consumed immediately as soon as it is ripe.


Among the various precious substances it contains, guanabana is rich in vitamins C, A and B, proteins, minerals (calcium, phosphorus, iron), water and sugars.

For years now the news of the alleged miraculousness of guanábana in curing cancer. True or is it a hoax? We hear that it is even 100 times more powerful than chemotherapy, with lots of testimonies from people who would be cured thanks to this fruit and pills sold by countless companies.

Let's see what the most accredited sources say about it. According to Cancer Research Uk, there is still no firm evidence to show that guanabana can work as a viable cancer cure. In fact, laboratory studies have shown that the extracts of this fruit can kill some types of cancer cells, relative to liver or breast cancer, which instead resist certain chemotherapy drugs.

Ma there have not yet been any large-scale studies in humans to prove this. So, in essence, it is not yet known whether it can actually be effective or not in the treatment of cancer: according to Cancer research, many companies that sell guanabana capsules or products are not supported by any accredited scientific organization. The advice that is given is therefore to be very cautious in believing certain information or pay for alternative treatments that are read around on the various sites.

Finally, what is pointed out is that some research on the fruit has highlighted its power to affect the nerves, when taken in high quantities. What is known and proven is that instead, for years and according to tradition, local populations have used the bark, leaves, roots and fruits as remedies against viruses and infections, parasites, rheumatism, arthritis and depression.


What are cancer preventive foods?

Since it is also used in Asia, we report what a site that talks about natural medicine from the Philippines says. Here the guyabano, as it is called, is used as antispasmodic, emetic and sudorific drug.

The decoction of the leaves is also used to defeat lice and eliminate mites or even drunk to fight fever; to this end it can also be added to the bathtub.

Le fresh leaves they are applied topically to the skin to cure skin rashes, skin infections or eczmi, while the juice is used as a diuretic and liver depurative.

Also in Asia there is talk of initial research aimed at demonstrating that i seeds, bark, leaves and fruit appear to be useful in killing cancer cells, leaving the healthy ones intact (reported again in 2001 in the "Journal of Natural Products"). Again in 2008, theNCBI (The National Center for Biotechnology Information) reported that Graviola fruit had proven anti-carcinogenic effects in vitro, but which had not been studied directly in humans.


Despite the lack of further data, many websites promote its sale, based on in vitro studies and those of traditional local medicine. Also from here it is recommended to be very careful.

The reflections could therefore focus on whether over the years the research has stopped or not, if further investigations have been made or not on the actual effectiveness: we therefore await further information.

It being understood that everyone is free to choose the treatment they deem best for themselves, it is always good to do so with the support and advice of a doctor or specialist.

In the Antilles, guanabana leaves were placed in the pillow to combat insomnia, as it was believed to have calming and sedative properties.

"The Healing Power of Rainforest Herbs: A Guide to Understanding and Using Herbal Medicinals" di Leslie Taylor
"A Friendly Skeptic Looks at Graviola" di Ralph W. Moss
Video: in a South American school, the traditional use of guanabana is demonstrated.

Food as a natural defense

> All the properties and benefits of Graviola

add a comment of Guanabana, some clarity on its properties