Great Toothed | How to train it? 5 Exercises To Know 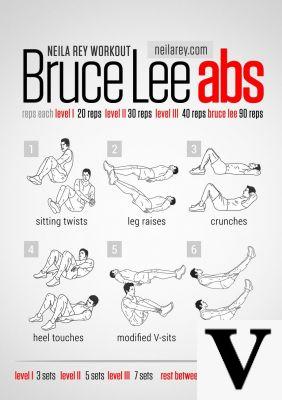 The great dentate muscle (also called anterior dentate) is located on the lateral side of the chest. It is considered a muscle of the scapulo-humeral girdle and originates with 9-10 digits from the external face of the first 10 ribs to insert itself on the medial margin of the scapula.

With its action it brings the scapula into external rotation, an important movement for the elevation of the humerus above 90 °, it also allows the scapula to adhere to the chest and can, as a secondary action, assist the movements of the ribs useful for inspiration.

Many wonder how to train this muscle directly, being a small muscle and located in a difficult part to train, this is not easy for many. Let's see which exercises actively involve him in their execution.

This muscle is often highly developed in Olympic lifters, this is because they perform a lot of overhead lifting exercises.


This happens because these exercises require an external rotation action of the scapula typical of the elevation of the humerus beyond 90 °, allowing to recruit a lot of the fibers of the great dentate, stimulating their growth.

This exercise consists in lifting a barbell above the head, starting from the standing position, the legs must be completely extended with the abdomen contracted and without using rebounds or compensating with movements of other muscles.

By performing this exercise in the correct form you have an excellent external rotation of the scapula, involving the great dentate in an optimal way.

The execution is similar to that of the military press, with the only difference that this exercise is done with dumbbells, and can be done simultaneously with two dumbbells or with one dumbbell at a time.

This exercise involves even more the large dentate than the military press, as using dumbbells you have less balance and the anterior serratus is more stressed, having to stabilize the body more.

3. Scroll over your head

This exercise is done starting with a barbell or two dumbbells held completely overhead.

From this position, the shoulders are raised, trying to bring them towards the ears. The great dentate in this exercise is very stressed as he has to keep the shoulder blades adherent.

The pullover is an exercise that can be performed either with a barbell, with dumbbells or even with cables. The exercise is usually done on a flat bench in a lying position with your feet firmly on the ground.


From this position the arms are extended backwards, keeping them half-stretched without changing the angle during the movement.

In the eccentric phase you inhale, while in the concentric phase you exhale. It is precisely this respiratory movement (which must be accentuated in this exercise) that stimulates the great dentate, especially in the negative phase where you inhale holding the air for a few seconds.

They are one of the best known and most practiced exercises in training. This exercise can be thought of as a pushing movement as it takes the chest away from the floor.

The exercise is carried out starting from the ground in the supine position, resting on the hands (held at about shoulder width, or otherwise according to which muscle you want to emphasize) and on the tips of the feet (kept a little narrower than the width of the shoulders).


Usually this exercise is carried out in the free body, but when this is too easy for us it is possible to use additional overloads (to be placed above the back) or to perform it by adding difficulties, such as holding the hands between two steps in order to increase the ROM. (range of motion) and stretch in negative.

This exercise allows an excellent recruitment of the great dentate, especially during the final movement of the exercise, that is when you go in extension with the elbows.

Accentuating this phase of the exercise will bring the shoulder blades into protraction, and these will have to be held in this position by the large dentate, which will therefore be very stressed.

We have seen many exercises that involve this small, but very useful muscle, in an optimal way.

Obviously, many other exercises also involve him directly, especially all those where the scapular movement or scapular adduction is accentuated.

Audio Video Great Toothed | How to train it? 5 Exercises To Know
Group training | Everything you need to know about the benefits of group training ❯

add a comment of Great Toothed | How to train it? 5 Exercises To Know