This muscle is the one that absolutely covers the largest body surface and its shape can be traced back to a triangle (for each antimer of the back) that covers a region that goes from the scapula to the vertebral column up to the upper part of the pelvis.

Its fibers cover a large part of the back and represent a sort of connection between the shoulder girdle and the pelvic girdle. The great dorsal originates in different points and on the basis of these areas this vast surface can be divided into 4 sectors:

The posterior lip of the inter-tuberculous sulcus of the humerus is considered for insertion of the dorsalis major muscle.

The function of this muscle (referring only to the humerus) is shoulder extension, shoulder adduction and intra-rotation of the humerus.

Considering the different points of origin and the single insertion point, it makes sense to think that a different positioning of the latter can favor the action of certain muscle fibers over others.

The great dorsal muscle is a very particular muscle: in addition to having an extended surface and in addition to representing the connection point between the upper and posterior cingulate, it also has a characteristic orientation of the muscle fibers.

Its fibers run in an oblique direction and with an inclination that varies according to the point of origin. This feature also appears quite logical in that if you make lines converge from all the points of origin to the single insertion point, you get lines with different inclinations.

In particular, the costal part and the scapular part have a more horizontal angle of the fibers, the vertebral part has fibers oriented obliquely while the iliac part has fibers with a more vertical angle.

This element represents an important element as the fibers of a muscle by contracting approach the point of origin and the point of insertion according to the line that corresponds to their orientation.

For example, the fibers of the brachial biceps muscle have an orientation concordant with the length of the humerus and in fact the contraction of this muscle brings the insertion closer to the origin precisely in this direction. If you think of the backbone, it performs both the function of shoulder extension and adduction and the width of the grip in a vertical traction exercise can favor one function over another.


To understand which movement prevails is very simple. Just observe the movement described by the shoulder during the execution of the exercise and check on what level this movement takes place. 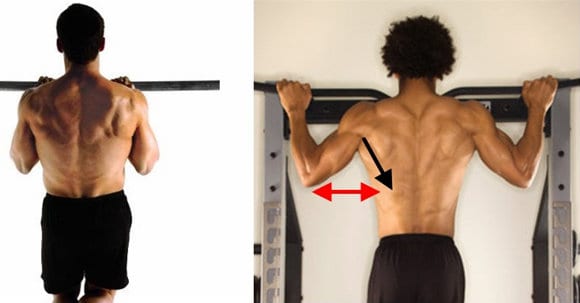 There is another factor to consider which is whether the grip you use is supine or prone. A supine grip places the insertion point more anteriorly than the origin points.

This results in greater movement along the sagittal plane resulting in greater activation of the shoulder extension function. A prone grip places the insertion point closest to the frontal plane on which the origin points are located.

A direct consequence of this is that the adduction function of the shoulder prevails. Specifically, if you keep the grip with a breadth that is shoulder width:

We have seen with this article how to train the great back. Combining the amplitude of the grip with the prone / supine variant it can be favored that areas of the great dorsal are more stimulated. It must always be taken into account that the great dorsal is activated completely in a traction movement but it is possible to favor the work of certain muscle fibers over others.

add a comment of Great Dorsal | Training | Grip and Tractions