Gomasio, how to do it and how to use it 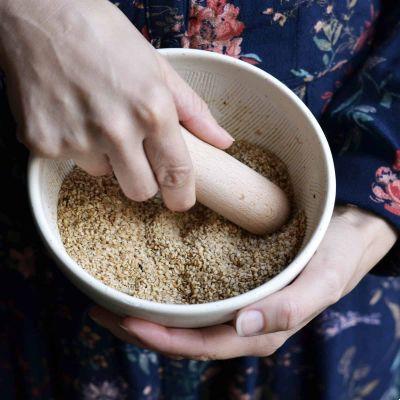 Gomasio is a condiment based on sesame and salte, used a lot in vegan and vegetarian cuisines to give flavor to food, precisely because it is very rich in nutrients, minerals and vitamins.

It comes to us from the Japanese tradition, where it has been used for centuries in the kitchen for various preparations, whose same name derives from goma and shio, which in the Japanese language correspond respectively to sesame and salt.

It is an excellent natural tonic for the blood, spleen, nervous system, muscles, hair and skin.

To make gomasio you will need a few tools, a pestle and a ceramic mortar, and a few ingredients, that is organic white sesame seeds, coarse whole sea salt.

Usually 6 parts of sesame and one of salt are used, but they can then vary according to personal tastes. You can also use black and red sesame, which are more difficult to find, but white is the richest in calcium. We remind you that the consumption of gomasio helps to reduce the use of sodium chloride, so as you get used to it, you can also reduce the proportions of salt.


Procedure for about 100 grams of gomasio: put 7 tablespoons of white sesame seeds in cold water, rinse them well and drain them. Pour the salt into the ceramic mortar and make it into powder with the special pestle.

In the meantime, place the previously washed sesame seeds in an oven dish, bake at 100 ° C for about 15 minutes, making sure they don't smoke. If you are more comfortable you can do this roasting operation also using a non-stick pan over medium heat and blowing the sesame for a few minutes, always without burning it or making smoke.

Leave everything to cool and pour the seeds together with the salt into the mortar. Crush everything with the pestle, squeezing and making circular movements. When you have reached the consistency of a not too fine and slightly oily powder, you are done.

The gomasio thus made is ready; it can be kept in a glass jar in the refrigerator for about a week. If you don't have a mortar and if you prefer to speed things up, you can safely use the coffee grinder.

Other variants want it flavored with herbs, sage and rosemary, for example, or pepper and paprika, to give even more flavor to your dishes, or seaweed, to be even more nutritious and special for your ethnic recipes; or further embellished thanks to the use of even more precious salts, such as Himalayan pink salt.

The choice varies depending on the recipes you will have to prepare. If you really want to make it as tradition dictates, get the suribachi, a Japanese ceramic mortar, and its pestle, the surikogi, as a gift.

Read also Gomasio and other foods in the macrobiotic diet >>

How gomasio is used

It is used in the kitchen in the most varied ways: to dress salads, boiled or steamed vegetables, cereals, pasta and rice, legumes, tofu and seitan and other veg preparations instead of salt and often also of the nut. Let's see the 2 quick and easy recipes.

In this case you can use dried kombu seaweed, cut it into very small pieces, brown it in a sauté of spring onion and mixed seasonal vegetables, adding gomasio and a little water, then add the basmati rice and let it cook by adding water. boiling for the time indicated, about 10-15 minutes.

Dish often served in Japanese restaurants, i green beans they are steamed and seasoned with soy sauce, gomasio, sesame oil or extra virgin olive oil, and a few whole sesame seeds to garnish. Free your imagination!

Audio Video Gomasio, how to do it and how to use it
Do oats contain gluten? ❯

add a comment of Gomasio, how to do it and how to use it