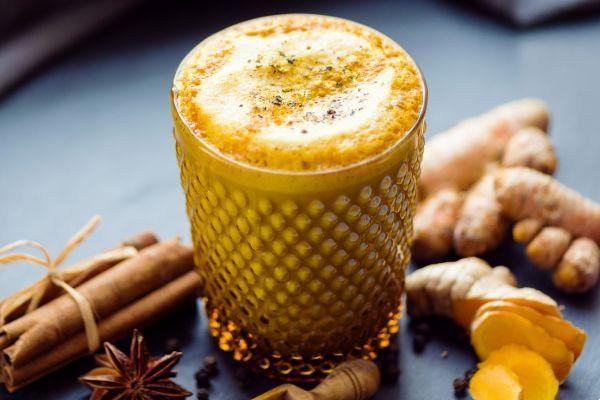 Turmeric, characteristics and use

La turmeric  is the rhizome of Curcuma longa, a herbaceous plant belonging to the Zingiberaceae family and native to southern Asia.

The turmeric plant presents very long leaves, produces flowers grouped in an ear and the fruit is a capsule.
Today turmeric is grown in various tropical regions for the rhizome trade.

Il turmeric rhizome it contains mono and polysaccharides, an essential oil and curcuminoids, including curcumin, which give turmeric its characteristic yellow color and to which the properties of this spice are attributed.

In addition to being used in the kitchen as a flavoring and as a base in preparation of curry, turmeric is widely used in herbal medicine for its multiple benefits.

For example, turmeric is also used for dental hygiene and as an ingredient for a natural toothpaste, so you don't need to worry: golden milk does not stain your teeth.

With the powder obtained from the dried turmeric rhizome golden milk is also prepared or golden milk, a drink that boasts numerous properties.

Il golden milk it is highly consumed by those who practice yoga to keep their joints healthy.


Curcumin takes effect antioxidant and anti-inflammatory and this action is due to various mechanisms, including the inhibition of some factors involved in inflammatory processes.

The antioxidant and anti-inflammatory action of turmeric is exploited above all for the joint pain treatment and consuming golden milk for breakfast every day could help keep your joints healthy.

2. The golden milk against digestive disorders

The consumption of turmeric it is recommended in dyspepsia, that is, in problems related to poor digestion.

Turmeric indeed has cholagogue and choleretic action (that is, it stimulates the production and flow of bile), stimulates the musculature of the gallbladder and has carminative and spasmolytic properties on the intestine.

These actions have been attributed to both the essential oil and curcumin present in the turmeric rhizome. Consume the golden milk before meals it could therefore improve digestive processes.

The consumption of golden milk could have a protective effect against diabetes since the metabolites of turmeric facilitate the synthesis of a hormone which in turn stimulates the synthesis of insulin and, consequently, allows a greater uptake of glucose at the cellular level with lowering of glycemia blood.

In countries where there is a large dietary consumption of turmeric, some neurodegenerative diseases such asAlzheimer seem to have a lesser impact.


The compounds present in turmeric appear to have a protective role in mild cognitive decline as they would inhibit the formation of the typical plaques of Alzheimer's.

The metabolites of curcumin they act on the homeostasis of lipids facilitating the lowering of the level of lipids in the blood.

The intake of curcumin seems to increase beta-oxidation (i.e. the process by which our body uses the fats present in adipose tissue). Plus the consumption of curcumin facilitates the mobilization of lipids and causes an increase in HDL, that is "good" cholesterol and a reduction in LDL, the "bad" cholesterol.

Finally, the metabolites of curcumin reduce the differentiation of fat cells, with a consequent reduction in their quantity body weight reduction.

add a comment of Golden milk: 5 benefits of turmeric milk