Goji berries: what they are and why they are good for you 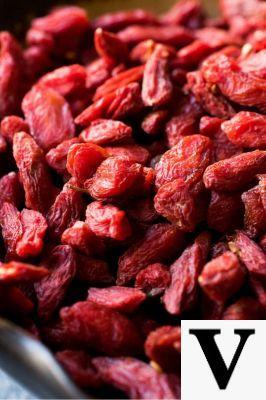 Our country is the first consumer in Europe of Goji berries. The data from the Nielsen Health / Wellness Global Survey say so: food as medicine. Seven out of 10 villagers appreciate these fruits for theirs wholesome virtues.

So much so that, in recent times, they are no longer alone dried or dehydrated in sachets and fresh in trays, but they are also used as ingredients in different food products: chocolate, sauces, yogurt, biscuits, ice cream, jams, juices, sweets ...

There are also those who use the puree of this fruit to prepare the organic pasta, such as the Antica Madia (anticamadia) pasta factory in Diano d'Alba (Cuneo) or organic sausages such as the Mainelli cured meat factory in Oleggio (Novara). And who uses the fresh berries to produce beer with goji like the Pejo craft breweries in Cogolo (Trento)
and Mustacanus to Rome.

You can also find them made in the country

Furthermore, these fruits are a mine of minerals precious for the body, in particular calcium, iron, potassium and selenium », explains Dr. Michela Carola Speciani, doctor of the Sma Center in Milan and expert in applied nutrition.

Originally from Asia, in particular of China, Mongolia and Tibet, are now also cultivated by us. The brand "goji of the country"(goji of the country) which brings together some farmers who grow organic berries of the Lycium barbarum type in Calabria, Basilicata, Puglia, Lazio and in other Southern Regions.

«It is a more valuable variety than the Lycium chinense, which is mostly imported in the form of dried berries and which is very often rich in preservatives like sulphites », explains Rosario Previtera, agronomist and president of the“ Lykion ”business network for the country's Goji. Furthermore, local berries have a higher concentration of antioxidants.

Researchers from the University of Perugia found that they have a higher and qualitatively better content of carotenoids, such as beta-carotene, lutein, zeaxanthin and lycopene compared to those imported from Asian countries.

They can cause allergies

Goji berries can trigger even severe reactions. The alarm was recently raised by French allergists. Berries contain allergens called LTPs. Cross-reactions have been described with olive pollen and mugwort, with foods such as walnuts, peaches, tomato and with tobacco.

Attention then to the possible interaction with some drugs, especially with anticoagulants. If you are in therapy, it is important to ask your own advice medical health insurance before including significant quantities of this fruit in the diet », concludes the expert.

Audio Video Goji berries: what they are and why they are good for you
How to make homemade muesli for breakfast ❯

add a comment of Goji berries: what they are and why they are good for you