Glyphosate: in which foods, toxicity and consequences 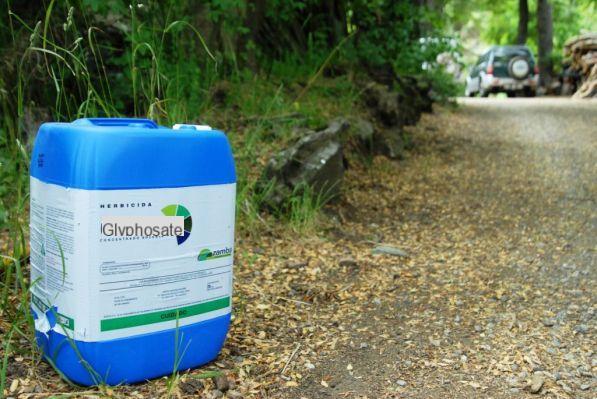 Glyphosate in food. Laboratory analyzes were carried out on wheat-based products such as pasta, bread, pizza, bakery products among the most used in the country and it emerged that these grains and flours are contaminated by various herbicides, in particular by glyphosate.

This control action was called "lifesaver" and was used precisely to verify the situation and the country of food products based on wheat.

The effects of this contamination must in fact be evaluated by adding all the sources of exposure to glyphosate because in addition to grain-based products, data have emerged in other foods including drinking water. Consequently, the health risks of people must be assessed by adding up the entire exposure to this particular substance.

The most used herbicide in the world ...

Glyphosate is a non-selective herbicide which is widely used on weed, horticultural, fruit and tree crops and also in non-agricultural areas such as road margins, river banks and other industrial or civil sites.


We can say that it is considered the most effective herbicide thanks to its wide spectrum of action. It is also the cheapest synthetic product to use which has obviously obtained the greatest diffusion in the world. It will suffice to know that 70% of the cultivated land on our Earth is treated with this herbicide which in technical jargon is known as roundup. Global analyzes speak that 70% of our food contains traces of it.

Its history begins with the patent of the chelating substance of metallini ions and then continues by Monsanto as a herbicide and antibiotic. Its main effect is in fact to chelate minerals such as Ca, Fe, Co, Cu, Mn, Mg, Ni, Zn etc ...

These minerals are essentially plant nutrients and serve the physiological functions of plants. Without the availability of these minerals, the enzymatic systems of plants but also of microorganisms and animals are unable to function. In this way the plants do not grow and the so-called weeds do not develop in fields treated with glyphosate. Moreover, recently it is also used at the end of the crops to help the drying of the grain and this spraying takes place a few weeks before the harvest.

Finally, the spread and use of glyphosate is linked to GM crops, especially soybeans, but and cotton and the countries that use it the most are America, South Africa and China. This product is also widely used in Europe.


Read also Glyphosate, green light according to the EU >>

The toxicity of glyphosate

The effect of glyphosate on different biological factors can trigger and worsen many serious diseases and therefore its toxicity for human health is now ascertained by the many studies carried out.
There are essentially two mechanisms of action of glyphosate and according to the researchers these models lead to overt pathogenesis thus triggering or aggravating various diseases in the human body.

The first mechanism of action is its ability to chelate metals such as calcium, the iron, copper, cobalt, magnesium, manganese, nickel e zinc. This process causes in humans a deficit in many physiological and enzymatic functions. In particular, the deficiency on the cytochrome P450 enzyme has many negative effects because it removes the body's innate ability to detoxify from harmful external agents. The lack of these elements has repercussions in many transformations and functions of our body with an obvious consequence of malfunctioning at 360 degrees.

The second mechanism of glyphosate acts on sulfur and therefore on the synthesis of some amino acids such as methionine phenylalanine and tyrosine. The laboratory for the production of vitamins and other substances essential to the health of the body is located in our gastrointestinal tract and these processes of synthesis are mainly the work of the precious intestinal bacterial flora.

With the use of glyphosate the bacterial flora is literally decimated and this no longer has the ability to contribute to the health of our body. In this situation of intestinal dysbiosis, the risk of the onset of metabolic diseases and various gastrointestinal problems, even serious ones, is very high.


The International Agency for Research on Cancer has defined glyphosate as a "probable cause of cancer" and therefore with a carcinogenic effect on humans.

In Germany, after the tests and analyzes carried out especially on beers, it was stated that glyphosate could be even more dangerous than DDT and hiding a wider toxicity for humans and the environment.

Consequences of the use of glyphosate

The consequences that are related to the use of glyphosate are the development of many types of neoplasms including prostate, thyroid, genital organ and even non-Hodgkin's lymphoma.

Furthermore, many of the autoimmune diseases have been linked to the negative effects of glyphosate. These include the increase in cases of diabetes, psychiatric diseases such as autism, degenerative diseases, celiac disease even in childhood, as well as food intolerant and other metabolic diseases. In addition, cases of especially male infertility are also linked to glyphosate as well as Alzheimer's and Parkinson's disease.

In addition to all these pathologies, iglyphosate has also shown consequences on epigenetic mechanisms, so much so that birth defects and cases of childhood leukemia have increased. This harmful consequence seems to be linked to the exposure of mothers to glyphosate, so much so that in America in 30% of breast milk drunk by infants this herbicide is present in dosages even 100 times greater than the threshold allowed to declare drinking water.

Furthermore, even people not exposed to the direct use of glyphosate and therefore who do not actively work in agriculture still have the presence of glyphosate in their urine and blood.. In tests in the country it also emerges that glyphosate is present in drinking and surface waters with results of 80% in the Lombardy region. While the other regions and the country are not yet available analysis and data on this even if we hypothesize a similar result.

The massive presence in the waters indicates its use in agricultural crops which therefore involves exposure to this substance from countless sources.
Also for the environment, glyphosate has very negative consequences because it enormously reduces biodiversity both towards the reduction of plant and animal species.

Even microorganisms are at risk of survival because they need minerals as micronutrients and glyphosate instead blocks their use through their chelation. Furthermore, pollinating insects and bees are increasingly affected by the use of this pesticide and we begin to understand how much these precious pollinating insects are important for the good balance of the natural ecosystem.

Environmental pollution has increased significantly due to the high percentages of glyphosate found in rivers, in the deep waters of pitch and obviously in cultivated and non-cultivated land.

Finally it was found the onset of weeds that have become tolerant to this herbicide and which risk overwhelming spontaneous and cultivated species with consequent instability for ecosystems and lowering of natural biodiversity.

add a comment of Glyphosate: in which foods, toxicity and consequences