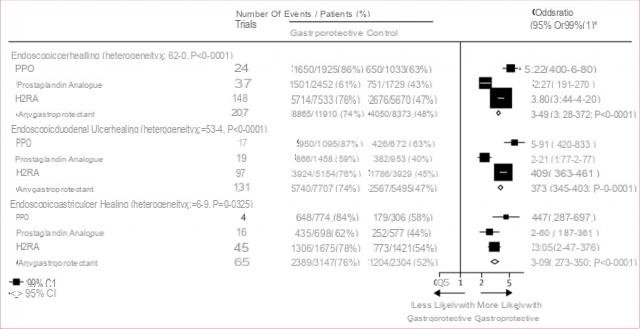 Gastroprotective drugs - as can be deduced from their very name - have the task of "protecting" the stomach, in particular its mucosa, from damage that can be caused by both gastrically damaging drugs (such as, for example, NSAIDs), and from pathological conditions that favor the formation of lesions in the gastric mucosa itself (such as, for example, stress, Helicobacter pylori infections, alterations of the endogenous factors that regulate the production of acid in the stomach and mucosal barrier deficiency).
In reality, the term "gastroprotectors" is quite generic and includes various active ingredients, with different targets and different mechanisms of action.
These active ingredients will be briefly illustrated below.

Proton pump inhibitors exert the activity of gastroprotective drugs by inhibiting stomach acid secretion.
More specifically, these active ingredients are able to irreversibly bind to the H + / K + -ATPase, that is to the proton pump present on the parietal cell membranes of the gastric mucosa, thus hindering the production of hydrochloric acid.
Proton pump inhibitors have a long duration of action and inhibit both basal and food-stimulated acid secretion.
The progenitor of this class of drugs is omeprazole, but lansoprazole, esomeprazole, pantoprazole and rabeprazole are also widely used.
In any case, to obtain more information about this class of drugs, we recommend reading the dedicated article "Proton Pump Inhibitors against gastritis".

H2 histamine receptor antagonists (or H2 antihistamines) also perform their action as gastroprotective drugs by inhibiting stomach acid secretion.
In fact, on the parietal cells of the gastric mucosa, there are receptors for type 2 histamine. positive signal for the release of hydrochloric acid.
Therefore, through the antagonization of the aforementioned H2 receptors, we assist in the inhibition of both basal and food-stimulated acid secretion.
Among the various H2 receptor antagonists used in therapy, we remember cimetidine (the progenitor of this class of drugs), ranitidine, nizatidine and famotidine.

Misoprostol (Cytotec ®) is a synthetic analogue of prostaglandin E1 (PGE1). This active ingredient is one of the gastroprotective drugs thanks to its ability to exert a strong cytoprotective action against the gastric mucosa.
More specifically, misoprostol is able to increase the secretion of bicarbonate and the production of mucus, thus preventing damage to the mucous membrane of the stomach.
This active ingredient is mainly used to prevent the damage that can occur following chronic use of non-steroidal anti-inflammatory drugs.

Sucralfate (Gastrogel ®) is a complex of aluminum hydroxide (Al (OH) 3) and sucrose octasulfate.
This compound is part of the gastroprotective drugs since it is a cytoprotective agent which - once it reaches the stomach - is able to form a gel that acts as a protective barrier against the gastric mucosa, thus hindering its contact with hydrochloric acid and thus preventing the onset of any injuries.
Furthermore, sucralfate is also capable of inhibiting the activity of pepsin and stimulating the synthesis of prostaglandins.
However, taking this compound can cause non-negligible side effects, such as constipation and reduced absorption of any other drugs taken orally.

Colloidal bismuth - similarly to misoprostol and sucralfate - also falls into the category of gastroprotective drugs, thanks to the cytoprotective action it is able to exert.
In fact, colloidal bismuth is capable of stimulating the synthesis of prostaglandins and bicarbonate; in addition to being able to exert a toxic action against Helicobacter pylori, also preventing its adhesion to the gastric mucosa.


Not surprisingly, colloidal bismuth - together with antibiotic drugs and proton pump inhibitors - is used in the eradication therapy of H. pylori itself.

In reality, antacids are not considered real gastroprotective drugs, as they are not able to increase the defenses of the gastric mucosa; at the same time, they do not hinder the production of hydrochloric acid, but only neutralize the excessive acidity of the stomach only temporarily.

The best known antacids include sodium bicarbonate (NaHCO3), calcium carbonate (CaCO3), aluminum hydroxide (Al (OH) 3) and magnesium hydroxide (Mg (OH) 2). In particular, the association of the latter two salts is used in various medicinal specialties (Maalox®, Maalox TC®, Maalox Plus®) which are widely used in the treatment of stomach acid and epigastric pain associated with dyspepsia. , peptic ulcer or other gastrointestinal diseases.