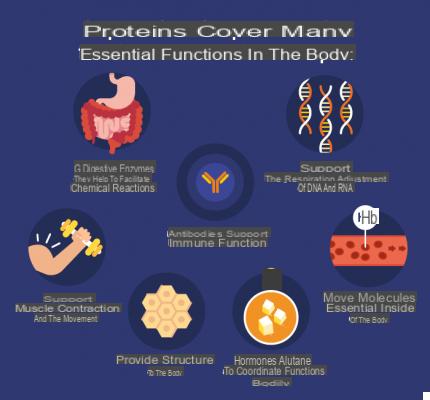 Proteins are often referred to as the building blocks of the body. This similarity refers first of all to their important structural function. For example, we find them in large quantities in the structure of muscles, bones, nails, skin and hair.
Going down to the microscopic level, proteins form the scaffolding of each cell, called the cytoskeleton, which allows cells to change their shape or move.
The most important structural protein in the human body is collagen, which makes up approximately 6% of body weight. There are many types of collagen, more than 20, characterized by slightly different properties and also by a different organization in fibers and fibrils. Type 1 collagen, for example, is by far the most abundant. In fact, it enters the composition of the main connective tissues, such as skin, tendons, bones and cornea, where a high tensile strength is required. On the other hand, type 2 collagen is present in cartilage and vertebral discs, where greater resistance to compressive forces is required. Another structural protein, elastin, provides elasticity to tissues such as the skin, allowing it to return to its original shape after being subjected to stretching or contraction forces.
Finally, let us recall keratin, a structural protein characteristic of hair, nails and hair, and tubulin, the fundamental unit of the microtubules that constitute the scaffolding of the cell, that is, the cytoskeleton.

But proteins do not only have a structural function. More than bricks, they can in fact be compared to a real construction company, with the functions of construction, demolition, transport, storage, defense of buildings from environmental dangers and even planning and coordination of works.

With their contractile function, some proteins set muscles in motion and more generally generate movements in cells and tissues. Think for example of when a cell, like a white blood cell, has to move from the blood to a tissue to get closer to the pathogen, incorporate it and destroy it. The two best known contractile proteins are actin and myosin, which are present both in muscles and in the cytoskeleton.

The proteins also participate in the immune defenses, forming the immunoglobulins, which we all know as antibodies, important for the defense against infections. Each cell also exposes on its surface recognition proteins that allow it to be recognized by the immune system as harmless, because it is part of the organism. When this recognition system does not work properly, the immune system attacks the body's healthy cells and so-called autoimmune diseases appear, such as systemic lupus erythematosus, rheumatoid arthritis or Graves' disease, which is one of the most common causes of hyperthyroidism.
Also of a protein nature are some lytic enzymes that certain cells of the immune system use to digest and destroy invaders.

As we said, proteins also have a transport function. Just think of plasma proteins, such as hemoglobin, which carries oxygen in the blood, or albumin which represents a sort of truck driver who is busy carrying many substances, including some hormones, fats and many drugs.
The proteins also constitute the so-called carriers, present as many hands towards the external surface of the cells and ready to grab the molecules that the cell needs to transport them inside. These transporters are highly specific; for example we have different transporters for glucose, for amino acids, for sodium, for calcium and so on. Obviously the carriers also work in the opposite direction, i.e. the cells have special proteins to which they delegate the elimination of waste substances.

Another important function of proteins is that of regulation. In fact, they participate in the chemical reactions that take place in our body, accelerating them, slowing them down, favoring them or hindering them as needed. Most enzymes are in fact proteins. For example, we have enzymes called proteases, which break down and degrade damaged or surplus proteins, or synthetases which in general are enzymes that favor the synthesis of molecules. For example, a well-known enzyme is ATP-asi which breaks down the ATP molecule, which is the body's energy currency. Finally, let us remember the DNA polymerase which participates in the synthesis of DNA.

Still on the subject of regulatory activity, how can we not forget the receptor action performed by proteins. Receptors are proteins able to recognize and bind to specific molecules, generally called ligands, modifying their structure precisely by virtue of this bond. The receptor can therefore be compared to a lock, to which a specific key corresponds, which is precisely the ligand.
The interaction between the ligand, which is the key, and the receptor, which is the lock, determines the opening of a door, thanks to the conformational change we have mentioned. Question: Remember when we talked a little while ago about carriers, or membrane carriers? Well, to transport a certain content, the latter must first enter the cell, which is very picky and selective in the entry of various substances. To choose which substances to let in and which not, the cell relies on the membrane receptors.
Still with reference to the regulatory action, remember that there are also proteins involved in the control of the expression of specific genes. In turn, each gene contains the instructions for the synthesis of specific proteins, which is entrusted to ribosomes, organelles comparable to real factories of controlled proteins directed by m-RNA.

Finally, proteins make up some types of hormones; this is the case of insulin, which allows glucose to enter cells, of the growth hormone essential for body growth, and of oxytocin, essential during childbirth and for the emotional bonds between men and women.