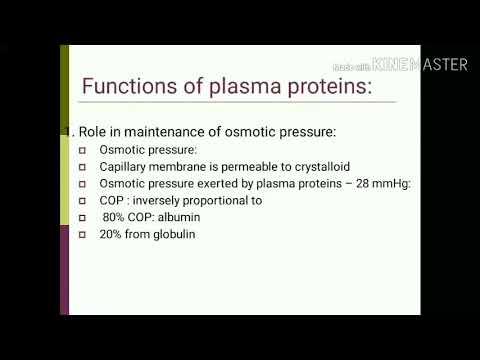 Synthesized by liver parenchymal cells, albumin has an average life span of 20 days. It is responsible for 80% of the oncotic pressure (colloid-osmotic) of the blood and as such favors the passage of water from the interstitial fluid to the capillaries (too much albumin exaggeratedly increases the volume of the blood, a deficiency instead leads to edema due to the accumulation of liquids in the intercellular spaces). It also acts as a reserve of amino acids, contributing significantly to the homeostasis of the most important proteins.


They are divided into three fractions: α, Β and γ. The first two cover transport functions, while the third includes the immunoglobulins involved in the body's defense processes (antibodies produced by plasma cells).

Alpha-1-globulins: increase during pregnancy, during treatment with oral contraceptives and during various morbid conditions of inflammatory or traumatic origin; a decrease may be present in a severely compromised lung condition called emphysema.

The alpha-2-globulins increase in the presence of particular diseases, such as infections, especially chronic, heart attacks, tumors, widespread collagen diseases, trauma and burns, diabetes. Therefore the increase of a-2-globulins has a great clinical significance, but necessarily, like the ESR, it must be considered as a non-specific index of disease, which will therefore be sought with more specific and detailed investigations. An isolated decrease in a-2-globulins is generally not of diagnostic importance.


B-globulins increase, even considerably, during pregnancy, since the rate of transferrin increases, and in some cases of abnormal presence of fats (cholesterol, triglycerides, phospholipids), as well as in other diseases, such as diabetes, hypothyroidism, hepatobiliary impairment (changes in which there is an increase in the fatty part of the bile).

Gamma-globulins have antibody function; there are 5 classes: IgG, IgM, IgA, IgD, IgE. IgG are the most important share and represent 80% of all gamma-globulins.

They decrease due to hereditary diseases (childhood agammaglobulinemia), in senescence, malnutrition, lymphoid neoplasms, AIDS, in people using immunosuppressive drugs or with nephrotic syndrome. These plasma proteins increase in response to acute and chronic infections and autoimmune diseases; there is a monoclonal increase in multiple myeloma (99%), in Waldenstrom's macroglobulinemia, in heavy chain disease, in non-Hodgkin's lymphoma, but also in benign, transient forms. These monoclonal gammopathies, which we have seen to be due to benign or malignant alterations of the immune system, are characterized by the hyperproliferation of a single clone of B lymphocytes of the hematopoietic marrow, resulting in the production of a very homogeneous population of Ig in the absence of an antigenic stimulus. ; the alteration becomes evident in the electrophoretic trace with the appearance of an anomalous homogeneous band, very narrow and symmetrical, located in a variable position, but easily identifiable in the gamma area.

Fibrinogen is a large plasma protein that is involved in the blood clotting process. Not being part of the serum, it is not found in the electrophoretic trace of proteins. Its concentrations increase during inflammatory processes of any origin, in recovery from surgery and during pregnancy; on the other hand, they decrease due to hereditary disorders, severe hepatopathies (reduced capacity for hepatic synthesis) and disseminated intravascular coagulation (due to excessive consumption due to the presence of numerous thrombi).