Front Squat | How is it done? Advantages and disadvantages 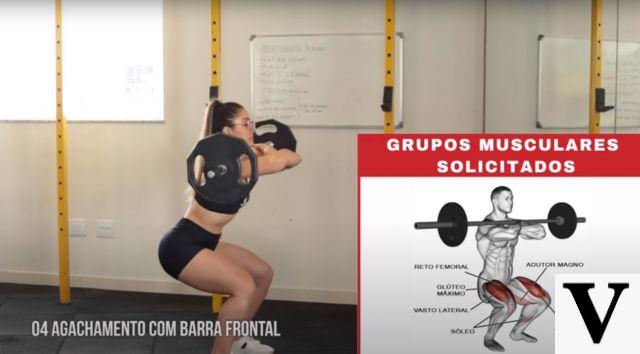 Il front squat it is a variant of an exercise that can be defined as fundamental in the context of weight training. The front squat requires that the barbell is placed on a sort of "shelf" formed between the anterior deltoid and the collarbones. On the contrary, the back squat, in the “high bar” variant, requires the barbell to rest in an area close to the area of ​​the high trapezes.

The fact that the barbell is held in front and not behind offers several advantages. In fact, in the front squat the muscles that work the most are i quadricipiti ed the buttocks while in the back squat there is a greater recruitment of the hamstrings and lumbar muscles.

Place the barbell at a height slightly below that of the shoulders. Place the barbell on a sort of shelf formed by the anterior deltoids and collarbones. The points of contact must be 5: the two frontal deltoids, the two clavicles and the neck.

At first the position is uncomfortable but with time you get used to it. Point your elbows straight in front of you, parallel to the floor, and always keep them in the same position. If mobility allows it, grip the barbell with your hands, otherwise use only the first two or three fingers.


Fingers should only serve as security, they must not hold the bar in place. The barbell must remain in position even without the hands, it must be supported by the shoulders and not held in the hands. Theoretically, the position of the barbell must be such that you can perform the movement keeping your arms straight in front of you, without bending your arms.

Once the bar is in position take a slightly lower foot span than the back squat ed extra rotate your feet and knees slightly. Keeping your elbows straight, bend your knees imagining you are sitting between your legs. The depth of the squat must be such that the pelvis is below knee height. At this point, pushing with the center of your foot and keeping the elbows in position, return to the starting position.

I personally find the front squat to be an exercise more beneficial than the back squat. The reasons are manifold.

# 1 Keep the barbell front also forces you to keep a straighter back and therefore allows not to put the lumbar area at risk.

A common problem is that in the final part of the back squat the pelvis automatically goes into retroversion. This position is very risky and can lead to lower back inflammation or even damage to the spine. Keeping a straighter back allows you to have a full range of motion without running into the problem of pelvic retroflexion.


# 2 Another benefit of the front squat is to train the thoracic erectors. These muscles keep the thoracic spine extended and are often underdeveloped muscles. Their proper development helps to correct kyphosis and other postural problems.

Keeping the barbell supported between the anterior delts and collarbones involves work. In the back squat the bar rests on the top of the back, no work has to be done to keep the bar in that position.

In the front squat, on the other hand, several muscles in the shoulder girdle need to work hard to keep the bar in that position. If this were not the case, you would not be able to perform the exercise because the barbell would fall.

# 3 If you don't performs the movement correctly you are unable to perform the exercise. Performing movements that load the spine incorrectly is more counterproductive than beneficial. The front squat forces the subject to maintain correct execution.

For this reason the front squat is better it adapts to series that are brought up to failure. With this exercise you can test your abilities and push yourself to the limit without putting your lower back at risk or incurring other injuries. The limiting factor when performing very demanding sets is almost always being able to keep the bar in the correct position.

Like any exercise, the front squat also has drawbacks.

First of all it is an exercise that it is not suitable for those with knee joint problems.

Keeping your back straighter provides more excursion in the angle formed by the knee joint. This involves the quadriceps more but it also places a lot of stress on that joint.

Another problem is that the front squat is an exercise that it provides for a fair degree of mobility on the part of the subject. Mainly this mobility is required in the wrists and ankles. Finally, a partially negative factor may be that you are unable to use the same weight in the front squat as that used in a back squat.

add a comment of Front Squat | How is it done? Advantages and disadvantages