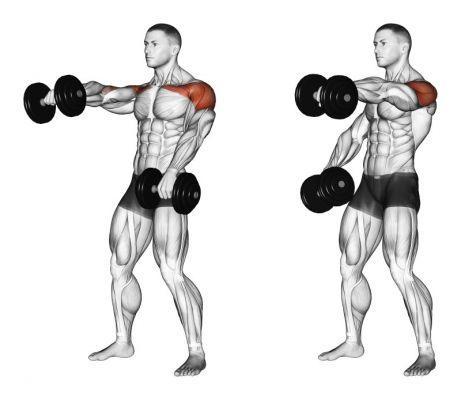 Front raises with dumbbells is a Monoarticular / accessory exercise

The starting position sees the athlete standing upright with the back in his position of strength, the knees slightly flexed and the distance between the feet equal to or slightly greater than that of the shoulders. The shoulders are not fully extended although the arms can still be considered at the sides. The elbows are almost fully extended. Each hand holds a dumbbell with a prone grip. The execution consists of flexing the shoulders or flexing / adding them, thus lifting the dumbbells until the humerus is parallel to the ground. Flexing the elbows is considered cheating and shifts the workload to the front of the shoulders. The help of lower limb thrust and excessive hyperextension of the spine is considered cheating. Although this is an exercise that is used to train the anterior portion of the deltoid, it is possible to progressively increase the contribution of the lateral portion of the deltoid as the shoulders are abducted. Excessive internal rotation of the shoulder is always inadvisable. Vertical body position tends to make exercise more difficult in the second half of shoulder flexion or flexion / abduction. There is also a variant of sitting on benches at different inclinations of this exercise, to progressively move the critical point of the movement lower as the incline of the bench approaches 180 °.

Muscles involved in the exercise Front raises with dumbbells


Action
Upper scapular rotation
Audio Video Front raises with dumbbells
Training in the water: Exercises to do at the sea ❯