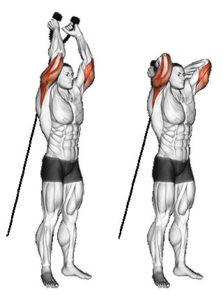 The starting position sees the athlete sitting on the appropriate bench inclined at 90 ° with his back in his position of strength resting on the backrest, the feet in contact with the floor, under or behind the knees; elbows extended and shoulders flexed so that arms and chest are in line from a lateral view. The shoulders are also partially abducted. The grip is neutral or prone / neutral. The execution consists in flexing only the elbows for a little more than 90 °, and then extending them again avoiding rebounds in the change of direction. In this exercise the lengthening of the long head of the brachial triceps is maximum and the spine is in full load unlike the lying variant. When the machine is not present in the gym, you can perform this exercise standing on the vertical pulley (or lat machine), usually holding the rope with a nautra grip or a wavy “v” bar with a ready / neutral grip. In this case the athlete places his back about 50 centimeters from the pulley (the distance depends on the height of the athlete, the machine and the length of the line); the torso leaning forward and the shoulders flexed so that the arms are in the same plane as the torso from a lateral view. The other aspects of the movement are the same as the variant with the car.

Muscles involved in the exercise Vertical French press to the cables