Free will does not exist! 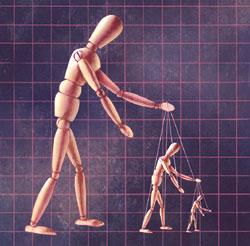 Many scientists and philosophy enthusiasts often put up
questioning the concept of free will. It really exists or is it just fruit
of imagination and religious dogma? Be that as it may, there is no doubt that
regardless of how things are each of us acts as if the
free will were an absolute truth.

One of the scholars who are interested in free
will, the psychologist Roy Baumeister of Florida State University, has
wrote the following in the journal Perspectives on Psychological Science: “At the heart of the
question about free will is the debate on
psychological causes of the action. That is to say, whether the person is an entity or not
autonomous who genuinely chooses how to act from an infinite number of options
possible. Or if rather the person is just one step further in the chain
of chance, and for this reason his actions are none other than the
inevitable product of a series of causes derived from previous events e
no one, in his same position, could ever have acted in such a way
different." It is clear that to talk about free will we should
refer to concepts such as self-regulation, control, flexibility in
behavior and processes aware of the to make decisions. One of the most interesting results about the
research carried out on free will, comes from the hands of scholars of
universities of Minnesota and British Columbia; these state that when
people believe (or try to believe) that free will does not
exists, then their behavior becomes more antisocial. These researchers involved 30 students in one
math skills study, in which they were supposed to solve 20
fairly simple problems, without the help of any medium such as pencil and paper
or computer, only with the mind. But as always in the majority of
psychological experiments, the real goal was to evaluate the relationship
between the beliefs of the participants and the consequences on their behavior. Before devoting themselves to the mathematical test, half of the
participants read the following paragraph by Francis Crick: “You, yours
happiness and your sadness, your memories and your ambitions, your sense
of personal identity and free will, in reality they are none other than the
result of the behavior of a large mass of nerve cells and molecules
associated. Who are you but a pack of neurons?… Even when it looks like
we have free will, in fact, our decisions are already
predetermined and we can't do anything about it. " In contrast, the other 15 participants read a
different paragraph by the same author in which no reference was made to
free will. In the math test every answer came
shown on a monitor immediately after the question. Thus, the students had to
press a button so that this is not shown and they can solve the
problem alone. Furthermore, the students were told that the researcher did not
he could know when they had pushed the button, and so they had to
trust in their own personal ethics. Evidently the researchers
instead they knew when the participants lied. Once finished it could be observed that those participants
who read the text relating to the inexistence of free will lied
much more. This effect was confirmed by a further experiment,
this time with a greater number of participants (122) and the
same results. Without a doubt the most interesting part of these
conclusions is given by the fact that a simple exposure to a paragraph that there
it makes one doubt the existence of free will can potentiate lies and deceit.
So ... what are the consequences of not believing in free will at all? This was not the only research carried out with the goal
to relate belief in free will and change
behavioral. A more recent study by university scientists
of Kentucky and Florida states that they don't believe in free will
reduces altruism. On this occasion 64 students were involved in the
half of which had phrases read like: "Science has shown that free will is an illusion", "All
behaviors are determined by brain activity, which is
in turn determined by a combination of environmental and genetic factors. " The other half read generic, neutral sentences. Each participant later had to face six
several hypothetical scenarios in which he had the opportunity to help other people
(like, for example, giving money to a homeless person, helping a friend make one
phone call). As you can imagine, those students who were induced to
doubting the existence of free will, they were less cooperative
in situations where their help was needed. Thus, psychologists claim that in addition to existence
real or not free will, believing in it makes us more altruistic e
positive in interpersonal relationships. I personally believe that the extreme positions are
always dangerous, in my opinion the wealth of the world is hidden in
nuances. So, in my opinion, regardless of whether our behaviors
whether or not they are determined by genetics, the environment and neurons in the end
we always have the possibility to decide. And precisely our ability
toself-determination it is something we should never forget.
Materialism turns us into chronic pessimists ❯

add a comment of Free will does not exist!