Blood pressure is a very important metabolic parameter; out of the normal range (about 70-80 mmHg of minimum on 110-120 mmHg of maximum) can in fact compromise the state of health.

If the tendency to low blood pressure (in the paraphysiological setting) is simply a risk factor for sudden fainting and consequent bruises or other related accidents, high blood pressure increases the chances of disabling or fatal cardiovascular and cerebral events. 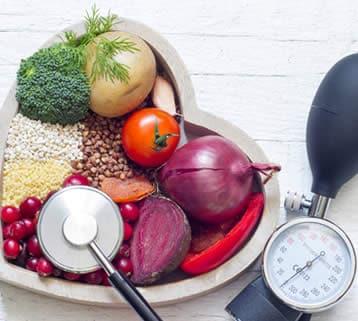 If we exclude serious genetic factors, we find that nutrition, body composition, level of physical activity and emotional state are the most important variables in regulating blood pressure.

In this article we will analyze the different foods that, although with different mechanisms, tend to reduce or normalize blood pressure.

What are the pressure reduction mechanisms?

Food can facilitate the reduction of blood pressure through several mechanisms:

What foods to choose

There are food products which, albeit in different ways, act directly on the pressure regulation mechanisms.

The most famous are the essential polyunsaturated fatty acids of the omega 3 group; the essential one is alpha-linolenic acid (ALA), but its derivatives eicosapentaenoic acid (EPA) and docosahexaenoic acid (DHA) have greater metabolic efficacy.

ALA is abundant in the germ of some starchy seeds and in certain oil seeds (chia, perilla, kiwi, etc.); the oils obtained from it are very concentrated.

The most famous are garlic and onion which - thanks to their ability to induce vasodilation - are now considered an integral part of food therapy against hypertension.

Increasing renal filtration favors the excretion of water, but also of mineral salts. For those who make excessive use of table salt, this mechanism is very useful, as it promotes the excretion of sodium (which we know is a predisposing factor for primary sodium-sensitive hypertension).

Water, drinks and foods with a high water content are diuretic. Especially the products which, in addition to being rich in water, contain nutritional factors that promote renal filtration have a marked diuretic function. These are mainly foods of plant origin such as: pineapple, cucumber, artichoke, onion, fennel, apple and dandelion.

Excess sodium, we repeat once again, is a predisposing factor for sodium-sensitive primary arterial hypertension. This is why table salt, which contains a very high percentage of sodium, is a bad ally for the health of the vascular system.
More than specific foods, the category of foods with low sodium content concerns their method of conservation, cooking and consumption. All fresh (with the only exception of bivalve molluscs such as mussels and clams) or frozen foods are low in sodium; on the contrary, foods in salt, in brine and, more generally, in jars (also in oil and vinegar) are rich in it.


Taking a practical example, the consumption of tuna should preferably be oriented towards the fresh or frozen slice, rather than the canned one. Or, among the dairy products, it is advisable to prefer yogurt, ricotta and soft cheeses instead of seasoned ones. Still, in the context of meat, it is advisable to avoid cold cuts, instead increasing the fresh one such as steaks.
Furthermore, it is a good idea to avoid adding table salt during cooking or directly on the plate, eliminating the so-called discretionary salt.

Like sodium, potassium, magnesium and calcium are also positively charged and are called cations. By increasing their consumption (within the limits of reasonableness), even if they occupy different spaces in the body, they favor the renal excretion of sodium to the advantage of pressure.

In particular, the increase in potassium is correlated to a positive modulation of the arterial pressure balance, so much so as to make it a real remedy against hypertension (as long as the kidneys are perfectly healthy).

The foods rich in calcium are: fresh milk and derivatives (better lean and unsalted); marginally, it is also possible to increase the intake of oil seeds such as walnuts, almonds or fortified products (such as soy milk with added calcium).

They are not part of any basic food group, which means they are not essential to the diet. They can be totally excluded from the diet without running the risk of nutritional deficiencies, but nevertheless many people, due to the habit, cannot do without them.

We are talking about drinks rich in nerves such as: coffee, tea, cocoa, ginseng, guarana, type cola, energy drink etc; the same goes for chocolate.

Since stimulants have a counterproductive effect on blood pressure, it is advisable to choose decaffeinated coffee, decaffeinated tea, caffeine-free cola, etc.

It is an absolutely generic definition, which includes all the typical foods of a diet calibrated for weight loss:

Note: it is also essential to calculate the right portions and consume them with an adequate frequency.

Foods without saturated and hydrogenated fats, and rich in fiber

* The correlation between saturated and / or hydrogenated fatty acids, fiber and hypertension is, for the moment, only of a statistical type. There is no biochemical explanation and the reason for this link is assumed to be multifactorial. In fact, foods rich in saturated fatty acids are mostly high-calorie (obesity is the main cause of hypertension) and large sources of sodium (a mineral that is harmful to blood pressure); on the contrary, those rich in fiber are less energetic, have lower glycemic load and index, and abound in useful mineral salts such as magnesium.

We must therefore avoid junk foods such as packaged snacks and fast foods, but also sausages and fatty cheeses by favoring fresh, unprocessed or minimally processed foods. Instead of refined starch-based foods, such as white bread and pasta, it is recommended that you choose whole foods.

add a comment of Foods That Lower Blood Pressure