Foods Rich in Vitamin D: What They Are 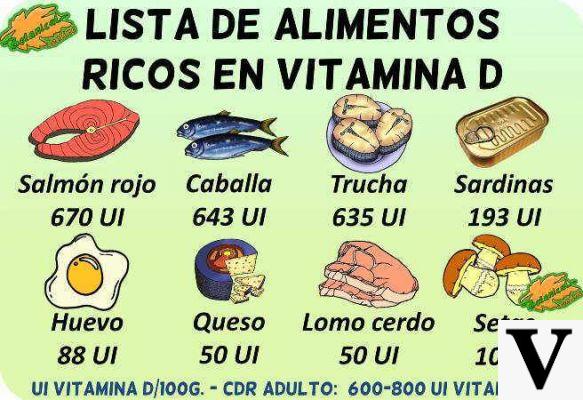 Vitamin D can be of exogenous origin, ie introduced with food, or endogenous, ie synthesized in the skin; however, in the strict sense of the word, none of these it is biologically active. The activation process requires an enzymatic conversion, i.e. hydroxylation (addition of the -OH group), which occurs in the liver and kidneys. The endogenous synthesis, caused by the action of ultraviolet rays (UV) type B, is regulated by a negative feedback mechanism that prevents a possible toxic effect; however, we must not forget that excessive sun exposure can increase the risk of skin cancer.


Since, under favorable conditions, the synthesis of vitamin D occurs regularly, today there is a tendency to no longer consider cholecalciferol as a nutrient, but as a hormone; It should also be taken into account that the synthesis and biological activity of vitamin D vary according to the conditions - a typical characteristic of hormones.

As anticipated, vitamin D plays a critical role in calcium homeostasis and metabolism. It has an indisputable protective action in the prevention of rickets and osteomalacia, and it is known that failure to reach peak bone mass in developing age - for which cholecalciferol is necessary - constitutes a risk factor for osteoporosis; however, other hypothetical health effects remain unclear. Studies carried out on the role of a possible vitamin D supplement in relation to the incidence of general mortality do not reveal any interesting correlation; at the moment no particular recommendations have been disclosed regarding the intake of vitamin D for preventive purposes.

The sum of the metabolisms of the various vitamin D molecules - especially vit D2 and vit D3 - determines the serum level of 25-hydroxycalciferol or calcidiol (25-OH-D), therefore, following the transformation that occurs in the kidneys, of calcitriol - there active form of vitamin D. The latter circulates in the blood like a hormone and regulates the concentration of calcium and phosphate promoting normal bone growth and skeletal remodeling. Calcitriol also acts on nerve and immune functions.

However, it is undeniable that the serum levels of calcidiol are significantly influenced by the food composition, especially if the exposure to UV-B rays is not sufficient. Diet and vitamin D supplements play a decisive role especially in the Nordic countries, where the sun does not fully rise at certain times of the year. It is indeed true that vitamin D can be stored in the liver, but it is equally true that to do this it would be necessary to produce significant quantities - at these latitudes, a process not fully exploited even in the light seasons.

Now let's see which foods contain higher levels of this prohormone and what are the needs that must be met.

Only a few foods, all of animal origin, contain quantities significant of vitamin D; other products that can contribute, albeit secondarily, to reaching the daily quota are mushrooms - but DON'T the vegetables.

Indicatively, 80% of the vitamin D requirement is guaranteed by solar irradiation, even if the research institutions have established the daily request on the hypothesis of a total absence of exposure to UV-B rays.

It may interest you

Cod liver oil is very rich in it (210 µg / 100 g), but it is not usually consumed as food; rather as a supplement, even if today different products are preferred than the traditional one such as: fish oil pearls, krill oil capsules, algae oil etc.

Among fish, fatty ones - such as salmon - and especially those belonging to the category of blue fish - for example bonito, mackerel, lanzardo, tuna belly, herring, etc. - can contain up to 25 µg / 100 g.

As for meat, on the other hand, only the liver - a product belonging to offal or fifth quarter - contains a level higher than the "trace" level (0,5 µg / 100 g).

For further information: Vitamin D: Where it is found and needs

No specific surveys have been carried out on your country's dietary vitamin D intake levels. The vitamin D content of foods is generally expressed by weight (µg / 100 g of edible portion), but the former "International Unit" (IU) is still in use (1UI = 0,025 µg of vitamin D).

This hypothesis is supported by the data obtained by analyzing the American population in which, despite the widespread use of food fortified in vitamin D, it shows average intake levels of 1,25 - 1,75 µg / day (USDA, 1983). Note: in the United States, milk is fortified with 10 µg - corresponding to 400 IU - of vitamin D per quarter of a liter.

Vitamin D in plasma and measurement

The most reliable variable for determining nutritional status for vitamin D is the measurement of the 25-OH-D level in plasma.

At values ​​of 25-OH-D between 10 and 40 ng / ml (Van den Berg et al., 1991) there are no signs of deficiency or even toxicity. However, individuals who do not expose themselves to sunlight can have much lower levels, such as 6 - 8 ng / ml. It has been verified that the concentration of 25-OH-D can instead reach 80 ng / ml in healthy adult subjects after prolonged exposure to the sun.

* To cover these needs it may sometimes be convenient to consume fortified foods or complete the dietary intake with a supplementation.

Audio Video Foods Rich in Vitamin D: What They Are
Vitamin B12 deficiency ❯

add a comment of Foods Rich in Vitamin D: What They Are