Food protein sources are many; the foods that contain the most are: eggs, milk + dairy products and all types of meat (including fishery products); subsequently we find legumes and cereals; finally, there are scarce quantities of proteins in vegetables and fruit. 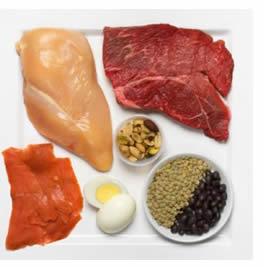 How Much Protein in the Diet?

Dietary proteins represent a portion of macronutrients that are fundamental to say the least for maintaining health. Their "quantity" is still the subject of numerous discussions but the most important scientific institutions affirm that the intake of proteins with the diet should remain at 12-13% of the total kcal; to define the quantity with greater precision, it is also possible to use a coefficient of g / kg to be multiplied by the desired physiological weight of the subject (from 0,75 to 1,5). Obviously the aforementioned coefficient changes according to age, therefore according to the stage of development; it can also rarely undergo significant percentage variations based on the level of sporting activity.
In the eyes of many people, whether they are laymen or professionals, the "recommended" protein intake is scarce or at least insufficient. In reality, taking for granted a balanced diet, normocaloric and characterized by proteins with a high biological value, the amino acids introduced should have the task of replacing the oxidized or deteriorated ones already present in the body; having said this, it is natural to think that the greater the metabolic effort (sport, growth, pyrexia, other pathologies ...) the greater the protein intake should be in the diet. In reality, the variables to be considered are much more numerous and this statement can only be partially confirmed. Without prejudice to the fact that, although we can generalize by discussing the dietary application, there are always large intra and inter-individual differences, in my opinion it would be appropriate to specify an absolutely essential detail: although it is correct to think that all tissues contain proteins and that they need a continuous amino acid turnover, it is true that the remodeling of structures does NOT necessarily involve the elimination of broken down proteins!

The structurally intact amino acids, as if they were "lego bricks", are reused for the synthesis of indispensable proteins. Ultimately, there are certainly situations for which it is necessary to modify the protein intake but not as much as one can guess; rather, in my opinion, the distribution of proteins in daily meals and the quality of the same evaluated by estimating the biological value is of greater importance.

Other articles on 'Food Protein'