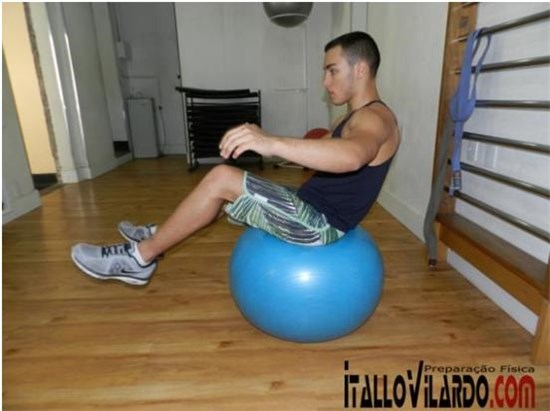 The fitball, or also called "Swiss ball", has the ability to create a great instability. Using this tool as a base it is necessary to activate numerous stabilizing muscles, first of all those of the core.

Based on the fact that the fitball creates a great instability in the execution of the exercises, it is easy to understand how it is not a tool suitable for work with heavy loads. It is important to underline this aspect because more and more often we see proposals for exercises in which the term “functional” is a little out of hand.

Specifically, squatting on a fitball, pushing movements with high loads and any type of exercise that puts a lot of stress on the joints are not good ideas. The best exercises will be free body and will exploit the high recruitment of stabilizing muscles or the ability to "slide" on this support but using only your body. Training with the fitball can be a good option to strengthen weak points in the body or as an extra work to do at home.

As this tool is an unstable support, it is practically mandatory to perform each exercise slowly and in a very controlled manner. For all the following exercises there are no particular recommendations in terms of sets and repetitions. To benefit from these exercises, however, it is advisable to "test" the affected muscles and, since there is no additional weight, it is better to opt for high repetitions.

Lumbar training lends itself very well to the use of this tool. We are not talking about deadlifts but rather hyper extensions and reverse hyper extensions. These two exercises are very simple.

In hyper-extensions it is to position oneself in a prone position on the fitball, leaning at the height of the pelvis. Place the feet under a firm support and with a slow and controlled movement contract the lumbar and buttocks until the back is brought up to form a slight lumbar hyper-extension. hold the position for a couple of seconds and return to the starting position.

In inverse hyper-extensions the movement is practically the same except that in this case the upper part of the body is used as a fixed point and the lower part is moving.

Performing exercises on the fitball forces you to recruit a lot of stabilizer muscles. The stabilizing muscles par excellence are the abdominals and the fitball allows you to work very well on this function.

You can do both front and side planks using this tool as a support. If these exercises are not difficult enough, simply raise the front support, for example by placing your hands on a chair. You can also try performing these exercises with one hand. The fitball also lends itself well to training the abdominals in a more dynamic way by exploiting the ability to "slide" of this support. For example, you can perform booklet crunches or reverse crunches with rotation.


The first exercise is simple: position yourself in a plank position with your hands on the ground and your knees on the fitball. At this point, contract the abdominals and exhale deeply sliding the legs on the fitball and, keeping the knees extended, bring the legs close to the chest.

The difficulty of the exercise can be increased by moving the arms away from the swiss ball. Reverse rotational crunches are performed starting from the same previous position and contracting the abdominals and rotating the pelvis bring the knees towards one arm and then towards the other.

By performing push ups, or pushups, the abdominals are automatically activated on the fitball and you go to work more on your high chest and triceps. It can be easily seen that by elevating the support of the feet the angle formed between the shoulder and the torso is greater. As a result, the high chest is in a mechanically more advantageous position to work.

At the same time, movement at the elbow joint also increases, resulting in more work for the triceps. A valid variant that allows you to work both triceps and abdominals very well is that of close-grip pushups.

Using a tight grip places more emphasis on the triceps and at the same time also decreases the base of support. As a result, your abs have to work harder to maintain stability during movement.

It is possible to train the buttocks by placing the heels on the fitball and the back on the ground. At this point, contract the buttocks by extending the pelvis. Maintain the position for a couple of seconds and return to the starting position.


Now let's see the 3 best exercises to perform with a Fitball.

The 3 Best Exercises with the Fitball

Lie down on the fitball with your back completely resting on the ball, hands behind your head, and legs slightly apart aligned with the shoulders.

The lower back must be supported by the ball; then do a crunch.

Place your toes on the fitball and bring your body into a push-up position.

Lean forward and bring your pelvis until you are with your torso in a vertical position, then slide on the ball returning to a horizontal position.

You have to slide the ball under your legs, until your body is in a straight line, always keeping your arms straight and your hands firmly on the ground.

You start with the second repetition by applying force on the lats to return to the initial push-up position and start again.

Bring your forearms onto the fitball and straighten your legs.

Contract your abs and slide on the ball to extend your arms and hips.

At this point it returns to the starting position.

Stand upright, keeping your heels a little wider than your hips, your legs slightly flexed and your buttocks contracted.

Grab the fitball and, after lifting it, bring it high above your head.

Contract your glutes and return with your arms and fitball up. Finally reverse the movement to your left side and repeat.

As we have seen, the fitball allows you to do a different series of workouts, which concern the lumbar, push ups, abdominals and buttocks. We have presented three simple exercises that you can do at home with the fitball to always stay in shape.

Audio Video Fitball | Useful exercises
Fit Boxing | What is it for? Does it make you lose weight? ❯