Fish it is a more digestible food than meat, although less consumed, rich in omega-3 polyunsaturated fatty acids. Let's find out more about the characteristics, the nutritional values ​​and how to recognize how fresh it is.

> 3. How to recognize fresh fish 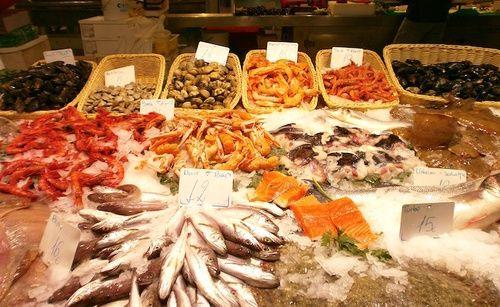 Fish, one of the fishery products

In our country, fishery products are consumed in a much lower way than the foods of the meat group (in a ratio of less than 1:10) despite having all the nutritional qualities of the foods of this group. They are, in fact, a source of high biological value proteins, vitamins and mineral salts.

The meats of fish products have a muscle structure almost similar to that of warm-blooded animals but, unlike those, the color is generally whitish (with the exception of some species such as salmon, tuna, eel whose flesh is more or less pink).

Most fish are lean while those considered fat have no more fat than those found in so-called lean meat. However the presence of fat is not easily recognizable in fish, so it is necessary to know if what we are about to eat is very thin (less than 1% fat as in cod, sea bream, ray, etc.), thin (from 1-3% as in sole, sea bass, dogfish, trout, turbot, etc.), semigrasso (from 3-10% as in tuna, anchovy, salmon, swordfish, etc.) or grasso (more than 10% as in eel and mackerel).

Fish stay in the stomach for a shorter time than meat (2 hours versus 3-5 hours), so they are mistakenly considered less nutritious than meat. In general, they are more digestible for their low content of connective tissue which determines an extreme chewability of the product and an easier attack by gastric juices.

Among the various fish, it is believed that the most digestible is cod, so much so that it is customary to administer it to children and the sick. This is partly true because experiments made in the laboratory, with a pepsino-hydrochloric solution that simulates the digestive attack, have led to distinguish fish as a fish product. very digestible (ray, cod, sole, sea bass, trout, snapper, sea bream, bream, grouper), digestible (mullet, tuna, mullet, dogfish, swordfish, sardines, anchovies) e less digestible (eel, herring, mackerel).

The chemical composition of fish meat does not differ much from that of mammals and birds as regards proteins, while a notable difference is given by fats due to the high content of unsaturated fatty acids.
The composition on average is:

As in all meats, the carbohydrate content is irrelevant. The main difference with other meats therefore lies in the richness of omega-3 polyunsaturated fatty acids that our body is not able to produce from other foods and therefore it is necessary to assimilate it from the outside with food.


The richness of omega-3s in these meats it contrasts with the richness of so-called fats "saturated"Of beef, pork, etc.
The results of studies are now known that highlight a protective effect of the consumption of fish or omega-3 polyunsaturated fats with respect to various diseases such as those of the cardiovascular system or some forms of cancer. After all, the saying "to be healthy as a fish" will apply.

The organoleptic characteristics of fish, how to recognize fresh?

More than for any other food, the relief of organoleptic characteristics for edible purposes that reveal the state of freshness or otherwise of the product to be purchased is of great importance for fish. Among these characters we find:

However, these characteristics of freshness have only an indicative value since it is not uncommon to find alterations of various kinds in absolutely fresh fish, not at all attributable to putrefactive processes. For example, in the mullet the eye is whitish immediately after death due to the presence of an adipose eyelid that closes like a veil or the dogfish that gives off a natural strong and slightly ammoniac odor or the sardine which, even if fresh, it loses its scales and presents itself with torn skin.

The cost of fish

It should be borne in mind that the different cost of the various qualities of fish has no relationship with the nutritional value.
The low price of some species is due to the lower cost of production for theabundant fish in some periods of the year such as for example sardines, anchovies, tuna and other pelagic fish species which at the time of reproduction in spring are gathered in large groups and therefore are easily and abundantly fished.

Mercury in fish: the causes and possible dangers

Pescetarian diet, what is it

Audio Video Fish: characteristics, nutritional value, freshness
Anti-cancer foods: what they are and when to take them ❯