Fight to the end

Life is like a ring, with its laws and rules, fight to the end. 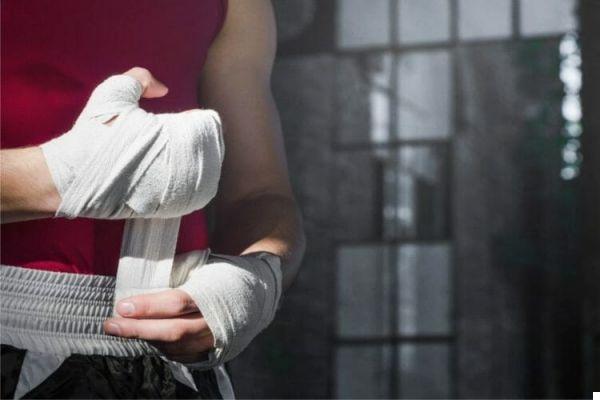 Now I will tell you something for granted: look that the world is not all roses, it is really a bad place, miserable and dirty and however strong you may be, if you allow it it puts you on your knees and leaves you with nothing forever. Neither I nor you, nobody can hit as hard as life does, so going forward it is not important how you hit, the important thing is how you can resist the blows, how you collect and if you end up on the mat you have the strength to get up, so you are a winning!

Anyone who has fought in the ring at least once knows how hard it is to get to the last round, but they also know that fighting to the end will be a unmatched satisfaction from which to draw great motivation and energy for the rest of your life.

When you are there, between the ropes, time flows differently, sometimes slower and other times faster.

It almost seems to be on another planet, the voices that arrive seem to float around the square, they are perceived but do not cross the threshold of the ropes.

The square has its own rules and if you don't respect them you will face defeat.

The law of the ring is valid not only for the fight on the mat, but also for everyday life, for whatever you are fighting, fight to the end.

Fight to the end - The law of the ring and life

# 1 Small goals even if they look big

One round at a time! I have heard this little phrase many times, it was repeated almost as if it were a mantra, you fight one round at a time, one step after another, without thinking about the complete match, just like in life.

Obviously there was a general strategy for the meeting, but the focus was on each singolo round.

Any large and ambitious project can be fragmented into smaller and feasible parts, no well-segmented goal is unattainable.

So think as if you were in the ring, prepare a well-defined strategy but take it one step at a time without thinking about the big goal.

# 2 Get in the habit of training

For some of us, training and fighting are one powerful prayer, it was in the moments during the matches that we felt alive and spiritual, when physical exhaustion was combined with mental one, it was like perceiving something more of the world.

Everything around us was different, although everything was the same.

If you are telling yourself that you work out every now and then when you need it or that you will do it when you want to get back in shape, forget it, training is habit.

Whatever activity you want to practice make it a fixed point in your week, dedicate time to your health: a run every Monday or a yoga class may also be enough.

Make training one of your most important habits, to be completed at any cost.

As I have already explained with the history of Honda, the more you delve into your passion, the more automatically you will skim your technical cultural background.

Becoming an expert also means eliminating everything that doesn't work, refine the gesture and improve it, have you ever seen an athlete in the ring make useless and non-functional movements? The no.

Try to look into all your daily activities and look for the actions you actually do they do not produce relevant results, study and learn subjects that have practical use.

If you are not a scholar of history or literature, you do not need to know the date of birth of Bernardo Canaccio, if not to win a quiz or to brag superficially to friends.

The key word in the ring and in life is to identify what is needed, enhance and enhance it: eliminate the rest.

# 4 Take the shots and stand up

The true ability of a winner is not always winning, but getting up after a defeat. The law of the ring is very hard, often even great champions after a sound defeat were on the verge of giving up everything.

The quote at the beginning of the article is always valid, the important thing is how you can withstand the blows, so you are a real winner, because life hits hardest of all.

In this regard, you can take a look at the article where I talked about the habits that winning people have.

The real challenge is with yourself, it's true, many told me that the goal was to defeat my opponent because he was the one punching and kicking, but the first opponent to beat was me.

If you are not at peace with yourself you won't be able to beat anyone else.

If you want to see your worst enemy, you just have to give look in the mirror.

To bring this important rule back into everyday life, you need to identify the moments when you yourself are sabotaging your plans.

Eliminate your internal frictions, defeat yourself that prevents you from achieving your goals, others do not count, the most important battle in life is fought inside you.

Now go to the center, take all the shit you swallowed, all the shit we got in these fucking years and dump it in that ring now!

Your anger can be an important ally, people in difficulty have always found the strength to make their dreams come true thanks to anger.

I'm not telling you to let it out in a violent way, but to convert it into practical actions and concrete to achieve your goal.

Next time you get high about something, try transform what you feel in actions that can bring you closer to your dreams and goals.

Anger is a form of energy, learn to use it for your own purposes, you will have an edge.

There are no failures or successes, but only results, from this point of view it does not matter whether or not you succeed in reaching your goal, the important thing becomes finish what you started, fight to the end.

Complete the cycles you still have open, end your pending commitments, you will immediately release a monstrous amount of energy and attention, go ahead, complete your fight.

A warrior of life

If you are fighting for something important, fight to the end, accomplish your goal without excuses, take the blows of life and stand up.

Remember that apologies are not a strategy, hope you are not lucky either.

A warrior does not fight hoping to be lucky, but he trains and builds a strategy, you can use these principles every day, be relentless.

How to deal with and overcome an unwanted separation: 10 tips ❯