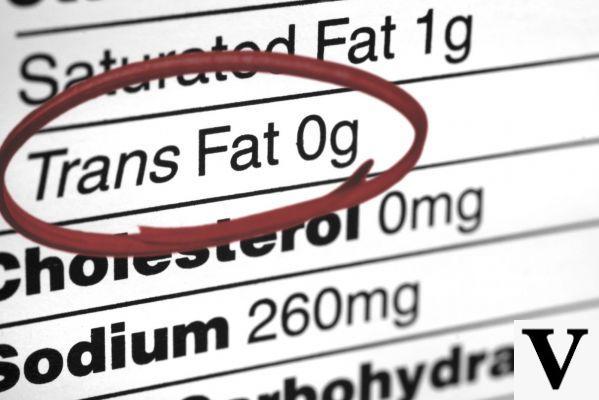 by Marzia Nicolini and Roberta Piazza

They all are grassi, but there is a big difference between those saturated (harmful to the heart and arteries if consumed in excess) e monounsaturated (which on the contrary facilitate the regular flow of blood). Furthermore, you must know that even within these broad categories, important distinctions must be made.

The best known is the one between Omega 6 and Omega 3, both belonging to the polyunsaturated family although they have different (if not opposite) effects on ours health. So let's try to clarify the advice of our experts, also and above all trying to understand how to make the most of them for our welfare.

And without demonizing anyone, because another indication to always keep in mind is that we need, obviously in the right doses, all types of fats. First of all, let's try to understand what are the factors that make them different from each other ...

The resistance to light and heat also changes with the structure

"To determine the differences it is mainly the link between the carbon atoms and the hydrogen atoms that make up their molecule », explains Professor Benvenuto Cestaro, biochemist and director of the School of Specialization in Food Science at the State University of Milan.

"In the saturated ones the carbon atoms (ranging from 4 to 24) are bonded to 2 of hydrogen each, forming a very stable structure, which resists the attack of free radicals and it does not alter even if subjected to high temperatures. In those monounsaturatedInstead, a carbon atom (there can be from 14 to 22) is attached to a single hydrogen atom.

The molecule is thus a little more "fluid", it resists heat well, not too much oxidation. In the polyunsaturatedfinally, the carbon atoms forced to remain single can be as many as 6. The fewer hydrogen atoms there are, the more "fragile" the structure is and it deteriorates easily both due to the action of sunlight and high temperatures ".

Some saturated fats are particularly bad

The latest study that put i saturated fats it lasted 30 years and was recently published in the British Medical Journal. Made by researchers from Harvard University in Boston, it analyzed the eating habits of 73 women and 42 men, concluding that excessive consumption of these fats favors the appearance of cardiovascular disorders. But not only.

The American scholars have also seen that the risk of getting sick decreased more when palmitic acid, present in high quantities in palm oil (41,21% of weight), in butter was replaced with mono or polyunsaturated lipids ( 20,86%), in cheeses, cured meats, egg yolk. An indirect confirmation that, contrary to what we are used to thinking, not all saturated fats are created equal. Together with the palmitic, the most dangerous is the myristic, present in all the foods of animal origin just mentioned.

Others do not even enter the bloodstream

There are also some fatty acids that do not contribute toclogging of the arteries because they are quickly transformed into monounsaturated oleic acid (as in the case of stearic in dark chocolate) or do not even enter the bloodstream because they are immediately digested by the liver (as happens to the lauric of coconut, which also has an anti-inflammatory action) or like those short-chain (7,82% of the weight in butter) that dissolve in the water present in the blood and, therefore, do not accumulate.

«It should not be forgotten that saturated fats also have positive functions. They favor the use of vitamin D and, consequently, the deposition of calcium in the bones. In addition, they give solidity to cell membranes, which are made up of proteins and lipids.

The important is respect the recommended doses by the Society of the Country of Human Nutrition (Sinu), according to which saturated fats must provide less than 10% of daily calories, ”says Diana Scatozza, a dietician, who also thought up the daily menu on the right.

Oleic acid is the best of the monounsaturated fats

Typical ofolive oil (it represents 72-74% of its weight), it is also present in dried fruit (in particular in almonds), in chocolate, even in butter (20,68 g in a hectogram) and in cured meats. "Like all monounsaturated fats, it plays a fundamental role in keeping cell membranes fluid, an indispensable condition for allowing the passage of water, minerals and vitamins and blocking that of toxins", explains Professor Benvenuto Cestaro.

"Over the years, the" lining "of the cells inevitably tends to stiffen, a condition that gets worse if you follow a diet excessively rich in saturated fat and cholesterol. The consequence? The slag produced in the intestine have free access inside the cells, cause inflammation and alter the ability to synthesize proteins, which are then used to produce antibodies, muscle fibers, red blood cells, etc.

In addition, the mitochondria, which have the task, among others, of "revitalizing" the antioxidants (allowing for example a molecule of vitamin E to be used billions of times) become less efficient leaving us more exposed to attacks by free radicals ». One more reason to use (at the right doses) both raw and cooked extra virgin olive oil.

Polyunsaturated: look at the ratio between Omega 6 and Omega 3

Either way it's about essential fatty acids, defined in this way because our body is not able to produce them by itself and therefore they must necessarily be taken with the diet. They are very fluid and alter (or rancid) very easily: they must therefore be protected from both light and heat.

L'linseed oil it is the most unstable of all, it should even be kept in the refrigerator and used exclusively raw. "Together with walnuts, it is the main source of Omega 3 for those who follow a vegetarian diet," says Dr. Scatozza. «Those who eat everything can instead stock up on fish blue, tuna or salmon.

The benefits of Omega 3 have been verified by several studies: they reduce inflammation, thin the blood by acting as an antiplatelet drug, improve mood, keep cell membranes elastic and, according to the latest research, it seems that they also benefit fertility ".

Instead, be careful about the consumption of Omega 6: "If you abuse them or don't counterbalance them with Omega 3s (their ratio should be 3 to 1), they trigger inflammation and increase the risk of stiffening of the artery walls and, in males, of developing prostate cancer»Warns Doctor Scatozza. The most "dangerous" of Omega 6 is arachidonic acid, present in foods of animal origin Lastly, do not forget that polyunsaturated fats are used by the body for the synthesis of neurotransmitters.

If you have high cholesterol it's not always the diet's fault

80% of the cholesterol it is produced directly by the liver, only 20% is taken by eating foods of animal origin (in fact it is completely absent in plant foods) such as cheeses, meats, meat, fish, eggs.

"Too low a cholesterol level (less than 130 mg per deciliter of blood) is more harmful than a mild one excess (the limit not to be exceeded is 200 mg / dl). It is in fact used for the production of sex hormones and adrenal, for the synthesis of vitamin D, for maintaining the fluidity of cell membranes.

To be kept under control is above all the Ldl (or bad) one that tends to settle on the walls of the artery and must be less than 100 mg. The good one (HDL), which tends to decrease with age, must instead exceed 60 mg ”, concludes our dietician.

Audio Video Fats: they don't always hurt
Daikon: why it is good and how to consume it ❯

add a comment of Fats: they don't always hurt