Farmer Carry | The Variants of Walking with Weights

Variants of the Farmer Carry

Taking up the technique already described, during this exercise one must try to keep a straight posture all the time, imagine assuming a posture as high as possible. Walk as in normal walking while maintaining a correct balance and the shoulders slightly retracted, letting the arms fall without the weights being in contact with the body.

This last trick makes them come the lateral deltoids are more activated and prevent weights from hindering walking and therefore balance and posture.

The farmer carry has several variants that place greater emphasis on different muscles already involved in the traditional variant. Let's see what they are and their respective benefits.

Literally "transport of the suitcase". As the name may suggest, this variant involves the use of only one handlebar. Apparently it may seem like a minor change but it is quite the opposite. Keeping the weight in one hand ours center of gravity it is noticeably displaced.

The greater the weight you use, the greater this shift. If we were not trying to resist the weight pulling us down on one side we would end up bending to the side. Instead, trying to keep one erect posture the whole is recruited core. 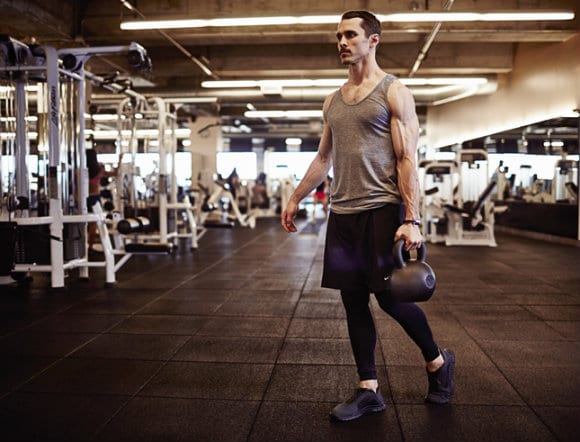 From the first few seconds you can feel that the oblique abdominals have to work hard to resist the lateral flexion caused by the weight. Moreover, at every step it is as if our balance was disturbed and anti-rotation work of the abdominal muscles is also necessary. During the execution of the suitcase carry it is important to concentrate as much as possible on maintaining a straight and upright posture trying to counteract the continuous imbalances.

Take deep breaths and when you exhale try to empty the lungs completely and flatten the abdomen by contracting the transversus abdominal muscle. Doing this creates one greater stability and a greater activation of the oblique abdominals. In this variant it is advisable to choose handlebars of 5 kg approximately lower than those that would be used in the traditional variant by opting for an exercise duration of approximately 40 seconds or a maximum of one minute.

Do 3 sets for each side. The next day you will feel that your obliques have worked hard.

Try to push the weight up as far as possible keeping the dumbbells about shoulder width apart. Once again it may seem like a banal movement and, in this variation, something unusual and even embarrassing. I find that strange looks and the opinion of those who observe you have little value. 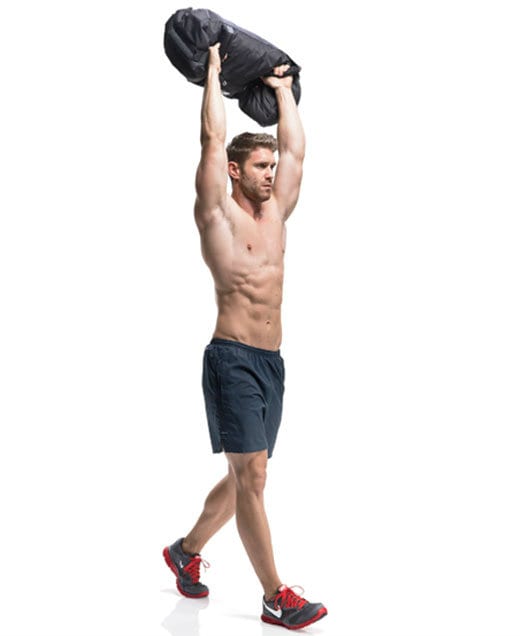 This is a variant that allows you to make the stabilizer muscles of the scapula with particular emphasis on the dentate. Delts are also widely recruited with an isometric job and movement prevention: with each step you take it is as if the weight is trying to move and the delts have to work hard to keep the two dumbbells still above your head.


The shoulder blade must have the ability to rotate and to allow the arm to rise in line with the rest of the trunk. Responsible for this ability are the dentate, which makes the scapula adhere to the body and stabilizes it, all the extra rotatory muscles of the shoulder and correct mobility of the joint itself.

Also in this variant it is important maintain a high and correct posture without giving in to the natural temptation of hyper extend the spine: this would place a great stress on the lumbar and indicate a lack of adequate mobility of the shoulder (probably too rigid lats as well as the pectorals). The work of the delts, especially the anterior and lateral ones, is perceptible, as well as for the high trapezius.

Opt for a weight that is about half than what it would use it for the classic variant of the farmer carry by opting for 3 series of about one minute. The transfer of this exercise on each vertical thrust movement is high.

This variant consists of the mix of the previous two: the weight must be kept above the head and only one handlebar is used. This variant combines the benefits of the two previous variants creating a truly effective exercise for both the abdominals and the stabilizing muscles of the shoulder joint.

The abs, despite the lower weight, have to work even more because the center of gravity is both shifted and raised. Use a weight equal to what you would use in the over head carry and opt for 3 sets of about one minute.

In conclusion, the farmer carry and its variants are gods forgotten but very useful exercises. They can all be seamlessly incorporated into any training routine getting only benefits.