Exercise in Pregnancy: Which and How to Do It Safely 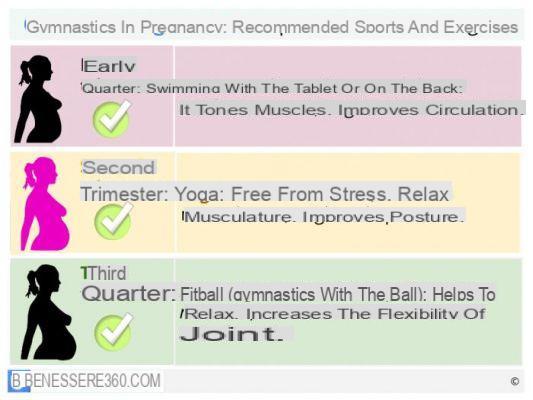 Today everyone knows that physical exercise during pregnancy is an excellent tool to ensure the health of the pregnant woman and the unborn child.

However, this has not always been the case and, as often happens, certain "habits" die hard. It should also be specified that, due to its characteristic evolution and its variable as well as subjective nature, each gestation is unique; therefore it would be incorrect to define inalienable guidelines concerning physical exercise during pregnancy.

In this article we will try to convey all the fundamental notions to better understand what and how to train during pregnancy, in order to increase the level of well-being, health and safety for the fetus as much as for the mother.

Warning! This article does not in any way replace the doctor's opinion and is intended as a set of advice, recommendations and reflections likely to be useful in pregnancy. It is therefore advisable to consult the gynecologist or the family doctor before changing, in any way, one's habits along the lines of what we are going to expose.

The benefits of exercise during pregnancy are numerous. Let's see some of them.

Benefits of Exercise in Pregnancy

By practicing a water gymnastics workout, you have further advantages such as:

We now report the global guidelines referring to the right attitude towards physical exercise during pregnancy.

Guidelines for Exercise in Pregnancy

Are there any contraindications to exercise during pregnancy?

Exercise during pregnancy is especially contraindicated in gestations at risk, i.e. characterized by excessive stress, impaired health of the mother or fetus and complications of various kinds.

There are many differences between the various weeks of pregnancy, especially in terms of risk index.

The first trimester is characterized, as the statistics suggest, by a risk of abortion higher than 1,5 out of 10; however, after the first reproductive failure, this increases to almost 40% after two consecutive events.

Is motor exercise risky in the first trimester?

It depends. What is certain is that, in light of a greater individual risk, added to the general risk of the first trimester, even the possible complications related to motor exercise may be higher than the norm.

In our opinion, it would be illogical and risky to insist on suggesting physical exercise in the first 12 weeks with the awareness of real pre-existing complications, or in any case of a subjective tendency to placental abruption or abortion.

Fortunately, abortion is not the most frequent case, even if over the years the cases of reduced fertility in the couple and recurrent spontaneous abortions seem to increase. Probably, given the past attitude of hiding this kind of problem (sometimes even from the general practitioner), it was not really the case studies that grew, but rather the diagnoses.

In the "normal" interesting state and without apparent complications - which does not, however, exclude a possible pregnancy failure and, we would like to specify, almost always independent dai Parents - physical exercise is not only possible, but even recommended.

Exercise during pregnancy can be done in many different ways. Mostly, pregnant women like the swimming pool and for this reason exercise in the water is particularly popular. Fortunately, for those who do not have good swimming skills or for those who have a greater sensitivity to contracting infectious venereal diseases - warts, candida, etc. - there are also many other solutions.

Among the others, training at home, also technically called home fitness, seems to be particularly popular. This includes strengthening anaerobic activity, joint mobilization and flexibility, but also aerobic exercise - such as walking on a treadmill or treadmill (choose the best treadmill based on Amazon user reviews for further feedback). Obviously, the exercises and protocols recommended for a pregnant woman are generally not the "normal" ones; that is why we advise against all future mothers to rush into the consultation of video tutorials on training to do at home.

Now let's talk about the home fitness exercises to do during pregnancy. We are talking, in this case, of those intended for muscle strengthening, joint mobility and flexibility, and of the metabolic type.

This is a rather delicate subject, as it is very difficult to establish what can be beneficial and what could be potentially annoying for the pregnant woman. We will therefore try to respect a certain safety threshold.

Let's start by emphasizing that intensity, density and volume must never exceed the limit of moderation or in any case of medium size. Secondly, it should be noted that strengthening, or maintenance for already trained women, must mainly concern the core muscles. Among these, the pelvic floor structurants play a fundamental role also during childbirth, but not only; rectus abdominis, transversus, diaphragm, obliques, lumbar, etc. are also involved.

Exercises such as the plank, side plank, hyperextension of the torso in a standing position, the twist with a stick, etc. will certainly be very useful. The repetitions can be between 10-20, the series at least 3 per exercise, the recoveries between 1'00 '' and 2'00 ''. We reiterate that the intensity must be medium or moderate, therefore more or less at 50% of the ceiling.

Executions aimed at elasticity and mobility, on the other hand, mainly involve the movements of the lower back (lumbar portion of the spine), of the pelvis in anterior and retroversion, and of the femurs on the hips. The movements of Pilates and Ata Yoga are particularly useful for this purpose.

Using the treadmill or treadmill for exercise while pregnant deserves a paragraph of its own. It is certainly the most popular fitness tool, probably due to the immediacy of the execution technique.

This will be used to perform a brisk walk, even on an incline, as long as the intensity and volume of training are not excessive. Let's not forget that oxygen and nutrients must also satisfy the growth of the fetus. Heart rate should always indicate a low aerobic belt condition.

For women who love to be outdoors, walking, brisk walking or walking, and Nordic walking activities are widespread. Jogging and running seem less appropriate, due to the repetitive stress caused by rebounds.

Is walking outdoors recommended during pregnancy?

We say yes, even if there are borderline cases in which it could be contraindicated. A fairly typical example is that of bad weather, but also of "extreme" temperatures, therefore too hot in summer and excessively cold in winter. The future mother should avoid too significant temperature changes, especially in the presence of sweating, to contain the risk of getting sick - in gestation it is not possible to take drugs freely.

Hours of light and the presence of fog can also make a difference. Due to the risk of accidental falls or accidents with vehicles in circulation, the pregnant woman is not advised to walk in the dark or in any case in the presence of poor visibility.

Not least the degree of environmental pollution. Certain urban areas, such as large cities or even particularly busy roads, can have high levels of pollutants that can greatly annoy both the pregnant woman and the unborn child.

Not to get fat

We are sure that, after reading this article, even the most reluctant and lazy people will see physical exercise during pregnancy as a preventive therapy rather than a "whim" to maintain a certain aesthetic condition; however, to overcome the "traditional" clichés obviously requires a certain level of mental elasticity - which not everyone possesses.

In reference to pregnancy, there are still bad recommendations such as: you have to eat for two, you need to satisfy the cravings to avoid frustration for the baby, you don't have to get tired and it is better to stay at total rest, etc. All this almost always leads to a condition of pregnancy overweight - even if more often, and not surprisingly, this slice of the population already shows pre-pregnancy obesity - which is correlated to fetal malaise, sometimes to pathologies of the itself, inevitable tendency to excess weight in the course of life and related metabolic diseases. It is useless to specify that giving birth to a child already compromised due to one's own shortcomings and / or subsequently ill-educating him - unlike infertility and an idiopathic negative course of gestation - is full responsibility of the mother, father and family unit (if present ).

For further information: Diet in Pregnancy: What and How Much to Eat

Then there is the opposite case, namely that of excess physical exercise during pregnancy.

Is training for fitness women as excessive as exercise during pregnancy?

This can be just as harmful as the previous case, even if the related risks are of a different nature. There is no need to consider extreme cases such as those, for example, of women suffering from eating disorders (DCA) - especially bulimics who use training as a method of purgation, or anorexics who exercise almost compulsively. . It is enough to take a look at the videos on the net to get an idea of ​​how many pregnant sportswomen / athletes take lightly the risks related to a training that is too intense, prolonged or carried out in unsafe conditions. It is basically "unconsciousness". Extending training for fitness women, for example, until the end of gestation, or continuing a power lifting or crossfit protocol, or even just swimming, running, cycling, exposes at the same time both metabolic and mechanical type.

Audio Video Exercise in Pregnancy: Which and How to Do It Safely
Deadlifts with a straight-legged barbell ❯

add a comment of Exercise in Pregnancy: Which and How to Do It Safely