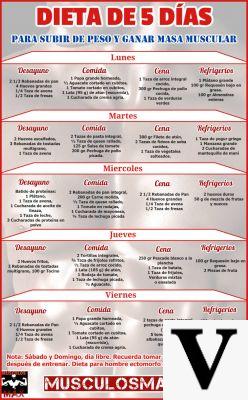 The diet to increase muscle mass is a food scheme useful for increasing tissue hypertrophy of skeletal muscles; the diet for the mass represents, in association with training (and rest), the only means to promote the increase of body weight for the benefit of fat-free mass or Free Fat Mass.
However, the diet to increase muscle mass (like other food therapies) CANNOT be STANDARDIZED, by virtue of the very strong heterogeneity of outpatient cases; Specifically, what often happens is that, with the same energy expenditure and with completely similar dietary regimes, some subjects respond well to the training stimulus and diet while others do not. For this reason, some professionals believe that the so-called CONSTITUTIONAL component plays an essential role and that, by carefully observing the various patients, some anthropometric characteristics are repeated with a certain frequency, also associating themselves in the response to diet and training.

Classification of the somatotype: the ectomorph

In addition to the classic estimate of the constitution and morphological type that affect the skeleton, in 1940 a certain Sheldon was able to group in 3 somatotypes with different anthropometric and behavioral characteristics. Obviously, as regards the emotional and sociological aspect, I totally refrain from expressing any judgment, but regarding the relationship between body shapes (muscle insertions, shapes of the same and proportions of the bone segments) and response to the composition of the diet ( increase in fat-free mass or decrease in fat mass) ... I admit that there is a certain statistical correlation.

Below we will present an example of a diet to increase muscle mass suitable for an ectomorphic somatotype, i.e. that subject characterized by: medium-tall stature, slender constitution, long-limbed morphological type, tapered and generally slightly hypertrophic muscles, very low adipose fat mass (thinness constitutional), short collarbones and, sometimes, winged shoulder blades (to learn more, read the article: The somatotype).
NB.: What will be explained below is none other than the fruit of PERSONAL experience and does not in any way refer to research or experimental work; moreover, I remember that while highlighting some correlations between somatotype and response to the diet, the essential key to achieving any goal are the SPECIFICITY (subjectivity) of nutrition and that of training; therefore, I urge readers who identify with the example NOT to take too literally the weights or nutritional breakdowns of the following example.


Principles of the mass diet for ectomorphs

As regards points 2 and 3, it will be the duty (and responsibility) of the Personal Trainer (or the "keeper" of the weight room in question) to intervene effectively; on the other hand, with regard to point 1, I am of the opinion that ectomorphs enjoy significant improvements in muscle mass by modifying the dietary regimen as follows:

NB. It may be useful to reduce aerobic physical activity, at least in the initial phase of treatment, and to use a maltodextrin and BCAA drink before, during and after the training session.
WARNING! To avoid any misunderstanding, I intend to clarify that: if by applying the aforementioned changes the results desired in the initial programming are NOT concretely revealed, it becomes necessary to identify the element hindering growth BUT, in no case, to increase recklessly (or, as often happens, to attempts) the protein intake of the diet!
Furthermore, debunking some clichés, I remind you that the TOTAL protein intake of the diet is always calculated through the sum of ALL dietary proteins ... and not only those with a high biological value (animal origin), since also vegetable ones (especially of cereals and legumes, but also those of fruit and vegetables) are digested and absorbed. The only limiting agents "could" be: an excess of dietary fiber, a gastric secretion disorder called hypochlorhydria, a (always pathological) deficiency of digestive enzymes.

Useful supplements in the diet for bulking for ectomorphs

The useful supplements in the diet for mass for ectomorphs can be 2 or 3: