Example Diet for Gout and Hyperuricemia 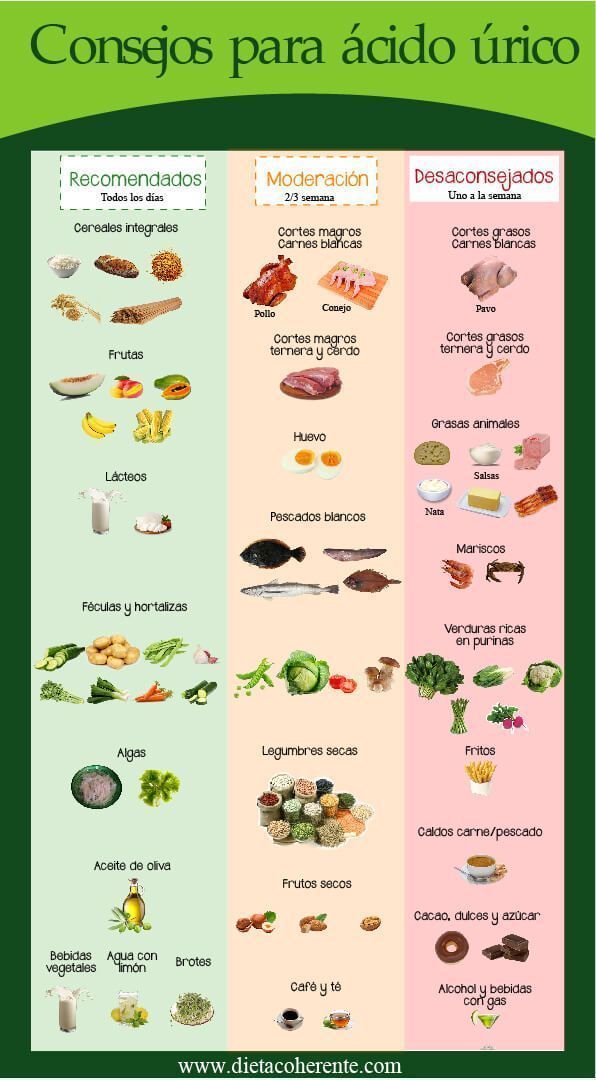 Hyperuricemia is a disease characterized by an altered metabolism of uric acid which, by increasing its levels in the blood, can accumulate in the tissues leading to gout (SYMPTOMATIC pathology on a genetic basis which can also become highly disabling); hyperuricemia is defined as the condition for which - even after 5 days of diet for uricaemia and in the absence of specific drugs - the uric acid concentrations in plasma remain ≥6,5mg / dl in women and ≥7,0mg / dl in women. 'man (adults).
Hyperuricemia is due to the excessive synthesis of purine bases (nitrogenous compounds of nucleic acids - DNA and RNA) which are not used and accumulate; to dispose of them, it is therefore necessary to convert them into uric acid and excrete it in the urine. Unfortunately, the ability to excrete is often not fast enough to compensate for its overproduction, so hyperuricaemia occurs. On the other hand, there is also the possibility that the kidneys themselves have a defect in the ability to filter uric acid from the plasma, constituting another cause of hyperuricaemia independent of purine production. Hyperuricaemia can therefore be caused both by an overproduction of purines and by the reduced ability to dispose of uric acid.
Hyperuricemia causes gouty symptoms consisting of: urate deposits in various locations, arthritic-like joint inflammation due to urate deposits, gouty nephropathy.

Diet for hyperuricemia and gout

- foods that contain more purines they are: anchovies or anchovies, sardines, sweetbreads, liver, kidney, brain, meat extract, game.
Followed by those a medium purine content: meats, poultry, fish, crustaceans, cured meats and sausages in general; peas, beans, lentils, asparagus, spinach, cauliflower, mushrooms.
Concluding with those a low purine content: milk, eggs, cheeses, vegetables (except those listed above), fruit, pasta and other cereals (except for wheat germ and wholemeal products).
Taking into account that a diet rich in glucose and its polymers favors the excretion of uric acid, while a diet EXCESSIVELY rich in fructose e grassi facilitates retention. As in many other metabolic diseases, also for hyperuricaemia it has been shown that the biochemical parameters suffer a greater benefit from the reduction of overweight / obesity rather than from the reduction of dietary purines. NB. The diet for hyperuricaemia and gout is often low in dietary fiber.

There are no supplements useful to counteract hyperuricemia and gout; however, often these are disorders related to a genetic predisposition that requires the use of specific drugs administered by the doctor such as: allopurinol, probenecid and sulfinpyrazone for continuous treatment, while, in case of acute conditions, colchicine and NSAIDs may be useful .

add a comment of Example Diet for Gout and Hyperuricemia