Epicondylitis Exercises | The Best To Practice

THEepicondylitis it is a condition of inflammation that affects the lateral portion of the elbow. The epicondyle of the elbow is an area where the tendons of the forearm muscles are inserted.

Epicondylitis is therefore a pathology that affects those subjects who strain this joint but also subjects who tend to maintain the same position of the upper limbs for a long time.

Epicondylitis is, as previously mentioned, an inflammation affecting the tendons of the forearm muscles that are inserted on the elbow.

This pathology will therefore be caused by imbalances in the development of the forearm muscles but also by tensions that remain in these muscles. By tensions we mean shortening of certain muscles, in particular those that extend the wrist, due to a prolonged shortening position.

Often this pain arises after intense efforts and persists and intensifies to the point of invalidating the use of the arm.

It should be noted that the elbow is not a movable joint. By itself, the only movements it can perform are those of extension, flexion and rotation of the forearm. Not being a mobile joint, the cause of the problem is hardly to be found in the elbow.

Rather we must consider the immediately adjacent joints, the wrist and shoulder, which are very mobile.

An incorrect positioning of one of these two joints forces the elbow to assume positions that are not natural to it. Not having the elbow the ability to modify and adapt to this position, stress accumulates on this joint with consequent inflammation. 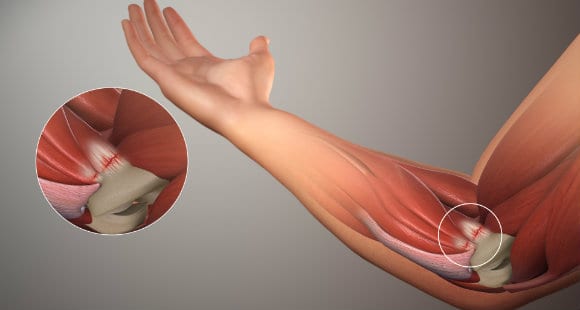 In the field of weightlifting one of the most common causes of epicondylitis is given by incorrect execution of the tractions. A problem that occurs quite often lies in the positioning of the wrist.

Grabbing the bar you tend to wrap your whole hand around it.

This leads to excessive flexion in the wrist which affects the flexor muscles of the forearm and consequently the elbow.

We tend to have this grip because the strength in the muscles that guarantee a firm grip is lacking or because you try to perform further repetitions trying to help yourself with every muscle possible rather than using the correct muscles.

This leads to an overload of the flexor muscles of the forearm, subjecting them to work that they are unable to bear..

Other error lies in the positioning of the shoulder.

When a supine grip is used this tends to generate a torsion in the upper limb and once again it is the not very mobile joint that is most affected. In fact in the upper portion of the traction movement the forearms spontaneously tend to rotate and position yourself in a neutral grip (palms facing each other).

However, since the bar is something fixed, the rotation moves along the kinetic chain and the elbow joint is affected. Verifying this trend is simple: just do some pull-ups on the rings with a weight that makes it rather difficult to perform the movement.


Starting from one supine grip we note that in the upper part of the movement the grip tends to rotate and become neutral. This is because the body spontaneously tends to assume the position in which it is strongest.

From what has just been said it is evident that the causes of epicondylitis are many. It ranges from muscle shortenings, the incorrect positioning of other joints adjacent to a lack of strength in both flexor and extensor muscles of the forearm.

It is necessary to remedy this pathology because it tends to degenerate invalidating the use of the arm and becoming chronic.

You can't just wait for it to pass or give up certain movements. Strategies can therefore be adopted.

? Strengthen the muscles that flex and extend the wrist. The exercises are simple: carry out these movements with a barbell. For example, place your forearms on a bench and, holding a barbell, perform wrist extension and flexion movements. It is also important to strengthen your grip, so insert maximum hold sets on the bar at the end of your session.

? Stretch the forearm muscles, for both flexors and extensors. Also take time to stretch the shoulder and arm muscles.

? Switch to loops as a support for pull-ups. This allows the joints to place themselves in the most natural positions avoiding stress on them. Using the rings makes the movements more difficult because there is less stability but it is certainly a choice with numerous advantages and which over time leads to better results.

add a comment of Epicondylitis Exercises | The Best To Practice