Envious people: The homage of mediocrity to talent 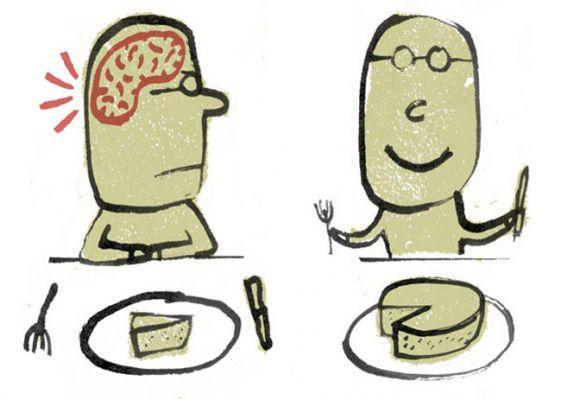 Once upon a time there was a man who received a garden as a gift to be able to cultivate and feed on it. However, the days passed and the man did not care for him. Weeks went by and he didn't bother growing it or fertilizing it in any way. After a few months the weeds had covered almost the entire field.

When winter approached and the time of harvest approached, the man did not collect anything. Desperate and angry, he looked up at the sky and asked:

This story, found in the book "Dialogues with Abul Beka", shows what is the way of reasoning and acting, often quite irrational, of envious people.

Envy, one of the seven deadly sins, is a deeply hostile feeling towards a person who has something we desire. It is wanting something someone has, but feeling inferior and unable to get it.

The 5 types of envious people

1. The sarcastic envious. Apparently, this person approaches everything with a great sense of humor, but in reality he is disguising envy with sarcasm, which is his favorite weapon for making the other feel bad. She will never attack directly, but she will always be ready to point out your weaknesses and mistakes with a smile on her face. It's his way of making you feel inferior. And if you ask him what he meant, he is likely to be offended or angry.

2. The direct envious. This person attacks directly with the intention of making you feel bad. These are usually insecure people, with an aggressive personality, who worry about detailing your flaws in an attempt to keep you from enjoying what you have accomplished. They remain alert, so that with every little sign of success, they will remind you of a previous failure or mistake. This type of envious people are very careful and will not hesitate to even put obstacles in your way, to prevent you from being more successful.

3. The envious pessimist. Its goal is to undermine your morale and motivation. Any positive news you give them that can generate envy, they will counter it by resorting to negative arguments with the sole purpose of depressing you. For example, if you say they just hired you in a very important company, they will say that surely the company will take advantage of any excuse to fire you or they will enumerate several reasons why, according to them, the company is not really that important.

4. The competitive envious. This person will not say anything openly, but his attitude and actions will speak for him. He is aware of every little detail in your life, he wants to emulate you. If you buy a cell phone, he rushes to buy a better one, if you change the sofa, he immediately goes to buy a better, bigger and more expensive one. They are the kind of envious people who are never satisfied with what they have, so they continually want what others have and even pretend to engender envy in you.

5. The envious lurking. This person will also not tell you anything, at least in the beginning. He is a kind of silent voyeur, who views your life with envy. When you finally make a mistake, fail or something goes wrong, take advantage of that moment of crisis to put your finger in the sore. Her favorite phrase is: “I told you so!”, Which hides a deep satisfaction because it makes her feel superior.

Envy is not enviable: In the mind of the envious person

Jorge Luis Borges emphasized that in Spanish, to say that something is very good, it is said that “it is enviable”. However, envy is one of the most damaging feelings out there. It harms those who feed it and also those who are its object, because often this person is forced to overcome all kinds of obstacles that the envious put in his way.

Envy is a corrosive feeling that can ruin life. Carrie Fischer brilliantly described her with these words: "envy is like drinking poison and hoping the other person will die."

Now some researchers of the National Institute of Radiological Sciences of Japan have found that, indeed, envy harms a lot those who feed it. These neuroscientists asked a group of people to imagine they were the protagonists of several social dramas in which they had very low social status while other people took credit.

They discovered that envy activates the same brain regions related to physical pain. And the more envy the participants reported, the more those areas became active.

At the same time, when these people were asked to imagine that others were failing, reward circuits were activated in their brains, meaning that the misfortune of the envied person activates the pleasure centers in the envious. In other words: enjoy the misfortune of others.

The problem is that the envious find it difficult to appreciate the good things in their life, simply because they are too busy worrying about the good things that happen to others. Harold Coffin said: "Envy is the art of counting the blessings of the other rather than your own".

The envious feels inferior, so deep down they believe that they will never be happy, powerful, capable or intelligent like the others, and that is why they harbor envy. In fact, a very interesting study conducted at the Carlos III University of Madrid revealed that people who are optimistic, or who have enormous self-confidence, are less likely to feel envy because they tend to be more cooperative and altruistic in their social relationships. .

But envious people usually tend to be very competitive, they always want to have more than others, but unlike others, they don't choose collaborative strategies but prefer to go it alone, even if it means worse results for everyone. In this way, feeding envy is like digging the grave in which to bury one's happiness. Therefore, envy is never enviable.

How to deal with envious people?

We can't stop someone from envying us. And in many cases there is nothing we can do to limit the envy of others, because these people have a very particular way of understanding the world. The Austrian sociologist Helmut Schoeck said: "the envious man thinks that if his neighbor breaks his leg, he will only be able to walk better."

The envious have a way of seeing the world so self-centered and distorted that the suffering of others, at times, even seems to them a "blessing". Therefore, the smartest thing to do is to try to get away from them and pay attention to the obstacles they can put in our path.

Another alternative is to highlight their strengths and achievements, in the hope that the envious will understand that we are all different and have different abilities. It is not necessary to compare ourselves because we must not try to be better than others, but only better than ourselves.

add a comment of Envious people: The homage of mediocrity to talent