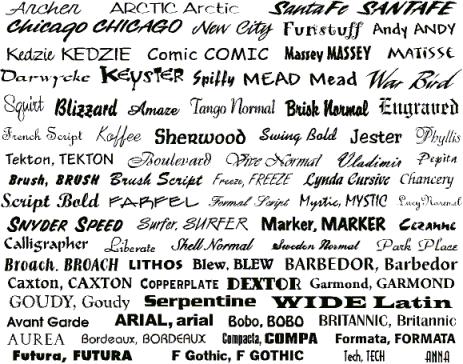 THElearning
it is a process conditioned by many factors in which not only the
complexity of the material or the motivation of the student but also others
small factors of perceptive nature. Recently university researchers
of Princeton and Indiana, they found that writing the subject material
of the study using a sophisticated and complex type of letter to read
can significantly improve learning. These researchers
they consider this effect to be due to the awkward letters from
reading favor a deeper processing of the material that is to be done
learn.

To reach this conclusion the researchers have
worked with 28 people aged between 18 and 40, who have
spent 90 seconds reading seven characteristics associated with three species
alien. Half of the people have read the material written in the Arial font
size 12 while that the same written material was passed to the others o
in Comic Sans or in Bondi in the same dimension. Both Comic Sans and the
Bodoni are characters that present greater complexity in reading
compared to Arial (even if they are not so complex as to make impossible the
reading itself). Fifteen minutes later people had to complete
a test related to the material read. The people who read the material
written with the most complex letters answered correctly in 86,5% of
cases, while those who read the Arial showed an accuracy of 72,8%. In a second experiment carried out in a school
university in Ohio, the researchers submitted some material written in
two different fonts: monotype Corsiva and Haettenschweiler. Eventually it was found that of the 220 students that
those who had studied the written material participated in the experiment
with the more complex characters they had significantly improved learning. Researchers claim that when we read material
written with simple characters, our brain processes it quickly and not
we strive to understand it. A kind of little perceptual trick. To the
on the contrary, when reading costs us greater difficulty we feel less a
at ease and so we focus more on the topic. Of course, in the
at the same time the researchers warn that characters should not be used
too complicated otherwise this would have the opposite effect. However, there is another basic mechanism that does not
discard to explain this phenomenon is the fact that the letters are less legible
they are more distinctive and so the material will be easier to remember.
Something similar to the effect of the novelty, a hypothesis that will have to be verified
with further studies.
Improve attention: With a white apron ❯

add a comment of Enhance learning by using particular characters