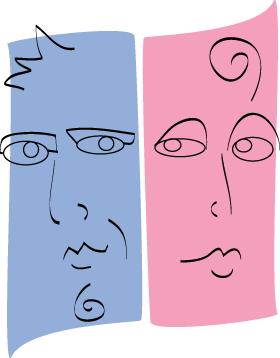 Women are better than men at distinguishing emotions, especially fear and disgust. The study, carried out by the University of Montreal, ensures that women are better at processing emotions through the auditory and visual canals. This time the investigators did not use the classic photos of faces showing emotions but involved actors who simulated the different emotional states. The study involved 23 men and 23 women aged between 18 and 43 years. As part of the research the volunteers were exposed to bi-modal stimuli: the acting of the actors and recordings in which human expressions were shown. Participants were asked to categorize emotions as expressions of fear or disgust. The women not only gave more correct answers but were also quicker in their decisions. However, a curious effect occurred, women recognized emotions more easily when they were experienced by other women. Clearly, this study does not aim to demonstrate the superiority of one sex over the other but to determine the possible differences to understand the etiopathogeny of those diseases that vary their incidence in relation to sex, as in the case of autism or Asperger's Syndrome. In 2002, the theory was proposed that these diseases had a greater incidence among males since they do not possess such a specialized system in recognizing emotional states and relating by confronting females. Now this hypothesis could be further explored given the perspective introduced by the new results. But ... Are these differences genetic or of social origin? The explanations are very varied and even if I accept the idea that genetic predisposition exists, however, the cultural incidence increases the a posteriori differences in emotional processing, even going so far as to favor changes at the cerebral level.

Emotions and illnesses the relationship: the results of some studies ❯