Emotional cycle of change. How not to get fooled by yourself 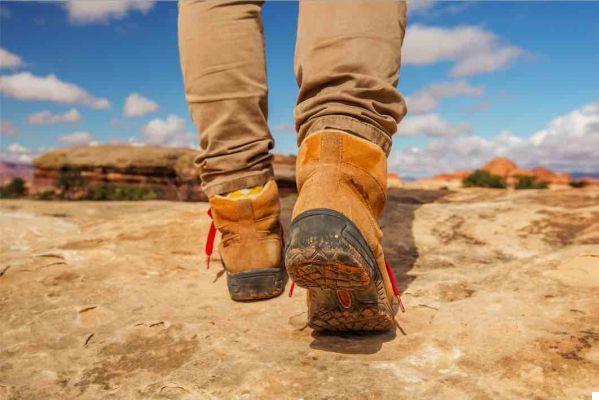 Think of all the times you've tried to make an important personal change in your life.

Even if you may not remember exactly which ones, in an attempt to change you went through a real swing of different emotions.

These emotions have put a strain on your psychological stamina and it is they, in the end, that they have determined success or failure of your attempt.

In today's article we will therefore see:

The emotional cycle of change

The emotional cycle of change was first described in the late 70s by Don Kelley and Daryll Conner as they studied the behavior of individuals within organizations.

It identifies the 5 typical emotional stages of every person who undertakes voluntarily a radical change. 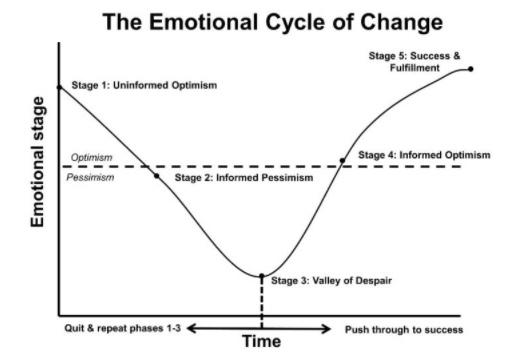 It could be a diet, a new study method, a gym membership, a new software that you want to use at work….

Feel free to choose the most appropriate example for you, the 5 phases of voluntary change will still be the same:

It is lo state of euphoria which almost immediately follows the decision to change.

You feel motivated to the stars and you are thrilled to the maximum: your mind, in fact, imagine future success with such vividness that he feels it as already present and real.

On the other hand, and that is why it is called "uninformed optimism", you have no perception of effort and cost that the change you want will bring.

And so, for example:

In short, you have just started, but you already feel like a winner.

At this stage you begin to collide with reality, that is with fatigue and fear that a radical change always brings with it.

The initial enthusiasm fades quickly, you begin to postpone the commitments you have given yourself, you do not see any concrete results to reward the (actually little) effort you have made up to that moment.

You're starting to think you might not make it, but you still have recovery plans of the situation.

It is the darkest moment, that in which you question everything and you have a total crisis with respect to the choice you have made and the methods you are using.

The goal that, in phase 1, you already felt yours, now seems very far away; at the same time, the efforts needed to get it e uncertainty of the final result make you feel that it is absolutely not worth it.

You perceive yourself as a failure, and thinking about the money you wasted on joining the gym, buying the course, visiting the dietician, only makes you more angry.

Your mind opposes, In this sentence, maximum resistance to change and struggles to find a way to get out of it with dignity.

Which means - almost always - finding thousands of excuses to justify yourself.

It is right here, in the valley of despair, that we abandon most of our dreams, projects and ambitions, to turn our heels and retrace our steps.

But when we hold on and manage to cross it, the next stage awaits us.

After the deep crisis, if you grit your teeth long enough, you wake up one fine morning and realize that you are indeed on the right track.

What seemed almost impossible before begins to succeed with a certain fluidity.

Anxiety decreases and self-esteem gradually increases, as do the concrete chances of success.


You see the first tangible results and, almost with amazement (the valley of despair has indeed given one lesson of humility to the bold self of stage 1), you begin to think that you may, in fact, actually make it.

There is still a long way to go to reach your goal, but the fact of relentlessly improving every day gives you confidence and a surplus of motivation.

Doesn't it seem real to you, but you did it.

Reaching the goal has not only made you slimmer, healthier, smarter at school or work, but it has changed your entire perception of yourself.

Your self-esteem is profoundly altered, and having made it makes you look at the rest of your life with greater optimism.

The paradox of the change cycle

If you have followed me on this journey through the emotions of the cycle of change, you will have noticed that

As you can see, these are paradoxical reactions, incongruent with respect to the reality of the different phases.

For this reason, during a radical change, it is very easy to make bad decisions, unless you use your emotional intelligence well.

Emotional intelligence and the cycle of change.

Emotional intelligence is the ability to recognize, use, understand and manage aware of their (and others') emotions.

When pursuing a major change in your life, emotional intelligence is critical because it allows you to:

So, for example, when you are super motivated in phase 1:

When instead, for example, you are in phase 3, or in the valley of despair:

In phase 5finally, enjoy it, but don't overdo it!

Even when we get what we set out to do, our emotional mind can play tricks on us.

There are those who feel emptied, those who believe they have not deserved it and those who, on the contrary, become an inflated ball and are convinced that they are infallible.

Avoid these extremes: if you have crossed the valley of despair you have surely been both good and lucky, therefore there is no reason neither to feel undeserving, nor to feel infallible.

Above all, finally, avoid the temptation to stop where you are.

Because the beauty of life is that, if you look closely, there is always a new change to make and a new transformation to seek.

And, now that you know how the cycle of change works and what its critical moments are, you have a formidable weapon in your hand to accomplish, one after another, whatever goal you have.

Fighting Fear: The key is to express emotions ❯

add a comment of Emotional cycle of change. How not to get fooled by yourself