Effect of False Consent: Believing that others are like us 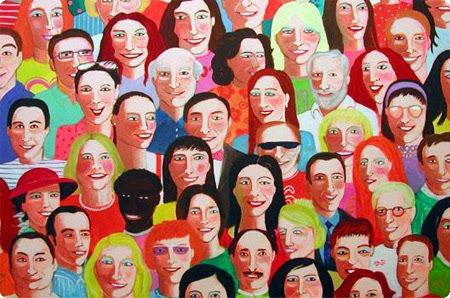 In 1977, Social Psychology saw a very interesting experiment take place: some university students were recruited and asked if they were willing to go around the university campus wearing a sign that read: "Repent".

Each participant was free to choose and, as you can imagine, some accepted the proposal and others did not.

This phenomenon is known as: False Consent Effect, and refers to our tendency to overestimate the degree of agreement others have with our beliefs and beliefs, attitudes and behaviors.

In other words, we tend to think that our habits, preferences and opinions are shared by the majority of people. Obviously, this is a mistaken belief that artificially increases our self-confidence.

In some ways Sigmund Freud was the first to refer to the false consensus effect, but he is
viewed more as a defense mechanism; exactly, he referred to the projection. That is, the fact that we do not accept some characteristics of our own or of the environment around us, because these are too threatening to us and we tend to project them onto others. For example, a woman who is not satisfied with her love affair, but who does not want to accept this reality, may see problems that do not exist in the romantic relationships of others.


However, it is useful to clarify that the effect of false consent refers only to the overestimation of one's own beliefs. For example, religious fundamentalists of every religion are aware that not all of the world shares their beliefs but,
when they are victims of false consent, they tend to overestimate the number of people who truly share their values.

The causes: from insecurity to lack of information

False consent is a phenomenon determined by multiple factors. It is known that in some cases this inclination has its basis in the desire to maintain a positive evaluation of ourselves. That is, if we believe that our self-esteem is threatened or if we wish to reinforce an idea that we feel particularly confident about, we tend to think that many other people are following in the same steps as us. In this way we trust ourselves and maintain our psychological balance.

In other cases, false consent is caused by a lack of information. In fact, we know that more conservative people read conservative newspapers and that religious fundamentalists confine themselves to their literature. In this way their beliefs are strengthened by the fact that they do not encounter heterogeneous and balanced information that allows them to observe from a different perspective.

Finally, another of the causes of false consent depends on the belief that there is an external influence. We think that if our decisions and behaviors are largely determined by the social environment in which we grew up and in which we live, then it is not strange that many others are in the same circumstances as us and, thus, have similar ideas and behaviors to ours. .

Dunning-Kruger effect: people who believe themselves to be superior ❯