Dumbbell curls with supination on an incline bench 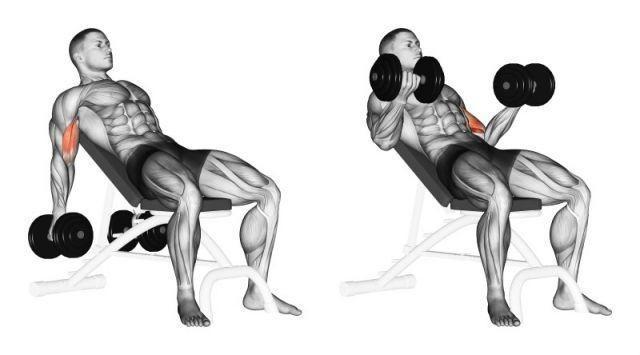 Dumbbell curls with supination on an incline bench: Execution

The starting position sees the athlete sitting on a bench inclined between 50 ° and 75 °, with the knees bent, the feet firmly resting on the ground, the back in its position of strength, the shoulder blades adducted, the shoulders hyperextended and alleged. The execution consists in flexing the elbows and supinating each forearm, taking care not to change the position of the rest of the body. The movement ends at the maximum level of flexion of the elbows with the forearms in supination. Flexing the shoulder is considered cheating. By emphasizing the isometric contraction at the end of the concentric one, the involvement of the brachialis increases. It is possible to perform this exercise, flexing both elbows at the same time, or flexing them alternately; the first option allows you to maintain greater tension on the trained muscles, while the second requires greater balance, given the one-sidedness, and resistance in the grip muscles, since the duration of the exercise doubles. The greater the incline of the bench press, the greater the tension on the brachial bicep.