Drugs for the Treatment of Depression 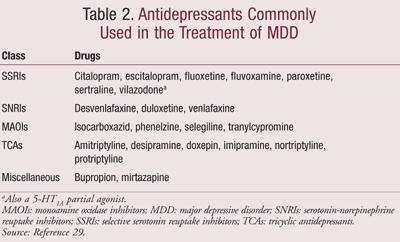 Among the psychic pathologies, depression plays a main role: we are talking about a complex disorder that essentially refers to a marked alteration of mood. In other words, depression can be described as a feeling of sadness, unhappiness and frustration, often associated with anxiety, stress, and suicidal thoughts.

There are many types of depression, sometimes distinguished on the basis of the severity and intensity of the symptoms that characterize them: agitation, anxiety, apathy, the appearance of unexplained physical problems (back pain and headache), difficulty concentrating, insomnia / hypersomnia , lack of sexual desire, thoughts of death, loss of general interest, a tendency to cry, sadness.


Drugs for the Treatment of Depression

Numerous treatments are available for the treatment of depression; in general, the patient undergoes cross-treatments, that is, based on both the psychotherapeutic and pharmacological approaches.

Clearly, to ward off the disease, the affected patient must have willpower and collaborate, trying to look at his surroundings from a different, better perspective: in doing so, the patient can obtain positive results in a shorter time.

As mentioned, depression constitutes a heterogeneous and multifactorial pathological condition, therefore the choice of one drug over another, and of a specialist rather than another, essentially depends on the severity of the condition. Some sufferers complain of such mild depression that they do not even need medication for complete recovery; others, on the other hand, require treatments, even very long ones, in order to defeat the disease.

Tricyclic antidepressants are useful for the treatment of medium and severe depression, possibly associated with physical pathologies. These drugs are not indicated for the treatment of mild acute depression. Furthermore, tricyclics are widely used in therapy for depression associated with impaired appetite, insomnia, hypersomnia and related disorders. Most of the time, the very first symptom of recovery is an improvement in the quality of sleep, which is clearly impaired by depression.


Among the active ingredients belonging to this class that can be used, we remember:

Selective serotonin reuptake inhibitors (SSRIs), whenever possible, are preferred over tricyclic antidepressants, as they have fewer side effects. In fact, SSRIs lack the cholinergic action, which is instead implicated in the manifestation of the secondary effects of tricyclics.

Among the active ingredients belonging to this class of antidepressants that can be used in therapy, we remember:

The bupropione. It is a selective inhibitor of dopamine reuptake (DA) at the presynaptic level and also has a mild action against the reuptake of serotonin (5-HT) and noradrenaline (NA).

These antidepressants work by inhibiting the reuptake of both serotonin and norepinephrine. Active ingredients such as duloxetine and venlafaxine.

These antidepressants work by inhibiting the monoamine oxidase enzymes responsible for the metabolism of monoamines. Active ingredients such as tranicylpromin and moclobemide belong to this class of drugs. However, as of today (January 2021), in the country, medicines containing these active ingredients are no longer marketed.


More articles on Depression and its Treatment

add a comment of Drugs for the Treatment of Depression