Does the Mediterranean diet make you fat? 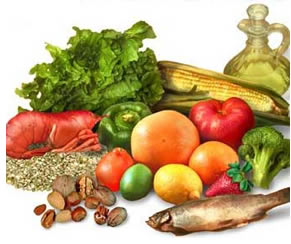 The strong point of the Mediterranean diet is the high nutritional content of molecules useful for the correct functioning of the organism; among these we remember: dietary fiber, lecithin, vitamins (all), mineral salts (all, including iodine), antioxidants (polyphenols, lycopene, anthocyanins, etc.), polyunsaturated and monounsaturated fatty acids (omega 3, 6 and 9) etc. It is therefore possible to define the TRUE Mediterranean diet as a healthy and balanced regime.
Many of the contemporary eating styles have drawn inspiration from the food composition of the Mediterranean diet, adapting it in a questionable way to the needs of the modern sedentary man, or rather by reducing or eliminating the most energetic foods in the diet: cereals. A striking example is the Zone diet, defined by Barry Sears himself (to the general dismay of followers and antagonists): "the evolution of the Mediterranean diet" [Porta a Porta - 7.12.2011 - Title: Meat, pasta or herbal tea?] .

The origins of the Mediterranean diet

The Mediterranean diet is a style of food based on the survival of coastal populations, which drew sustenance above all from fishing, agriculture and partly from pastoralism; the breeding of cattle for slaughter purposes was present, but not predominantly as in the hinterland.

Contrary to what one might think, the Mediterranean diet is not applied in all areas of the basin; some regions (such as those of the upper Adriatic) have never applied a similar diet, as the predominantly continental climate and the alluvial-marshy conformation of the land did not allow it. To date, the TRUE Mediterranean diet has almost disappeared; the variability of cereals (spelled, barley, rye, oats, buckwheat, sorghum ... etc) is no longer dependent on geographical areas and their consumption is mainly in the form of purified flours (and derivatives) obtained from human selections of wheat ; the backcrossing was carried out by favoring 3 characteristics: cultivation yield, resistance to parasites and high gluten content. The portions of pasta and bread consumed up to 60 years ago, typical of fishermen and shepherds who worked from dawn to dusk, have remained the same despite the fact that the collective calorie expenditure has halved. Legumes were consumed very frequently, contributing together with cereals to the achievement of the biological protein value necessary for survival, especially where economic conditions did not allow the regular consumption of meat and / or fish. Fruits and vegetables were of local origin and were consumed mainly fresh at seasonal discretion; the sun and the naturally fattened earth conferred nutritional properties far greater than today's vegetables. Olive oil, red wine and sea salt provided the contribution of essential molecules such as: poly and mono unsaturated fatty acids, polyphenols and iodine. The Mediterranean diet was inexpensive and based on human survival, it undoubtedly involved a good caloric density but above all it guaranteed excellent food quality.

Currently, what remains of the Mediterranean diet is a set of inappropriate eating habits and most of the time not proportionate to calorie expenditure. The abuse of pasta and bread is frequent, both in terms of quantity and frequency; vegetables and fruit are consumed little and badly, preferring tastes to food quality without respecting the seasonality of the products. Fish has also become a luxury item for coastal populations and its consumption is limited to a few fish species, most of which come from abroad; at the same time, the consumption of meat (especially fat) has increased dramatically. The result is an excessive caloric intake, a low intake of minerals-vitamins-antioxidants and an unsaturated / saturated fat ratio in favor of the latter.
The Mediterranean diet, in itself, absolutely does NOT make you fat, but what remains of it is certainly not the same diet thanks to which the populations of the basin could boast healthiness and longevity recognized and envied by most of the world's populations.

add a comment of Does the Mediterranean diet make you fat?